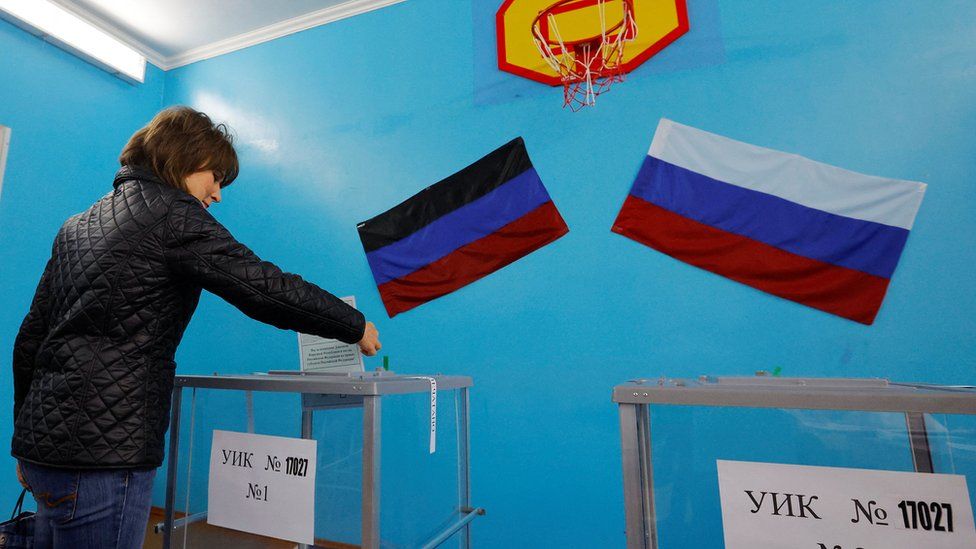 After referendums held on 23 September in the occupied regions of Luhansk, Donetsk, Kherson, Zaporizhzhia, Moscow is about to annex a part of Ukrainian territory. But playing the separatist card may result in an existential risk for Russia.

Referendums organized by Russia in the occupied regions of Ukraine are intended to legitimize Moscow’s control over the seized territory[1]. Taking aside practical aspects of organizing a vote on a territory Russia does not control in extenso either politically or militarily[2], as well as legal doubts concerning the procedure of vote and its results, it is noteworthy that by forcing it to happen, Russia is establishing a new situation in international relations, one that may turn existentially dangerous for itself once the war continues and the balance of power changes.

In Kremlin’s intention, the referendums are designed to be the political turning point of the conflict[3] and break its current dynamics that are unfavourable for Moscow[4]. As it became impossible to gain control over those regions physically by military means, Russia is trying to establish control by virtually incorporating them into its own legal sphere and thus to reverse the initial plan without changing the ultimate objective. Changing the legal status of a territory one effectively controls is one thing (policy of faits accompli has a long tradition and may be seen as a part of international practice), but declaring any piece of the world a sovereign part of a country without a precise prospect to really control it looks like an act of desperation that may have severe impact both externally and internally. As Aleksey Arestovych, Ukraine’s Presidential Office Advisor puts by quoting US General Douglas McArthur: “Never give an order that can’t be obeyed”[5].

The date of referendums had been moved by Moscow several times with an intention of making it a culmination point of what was supposed to be a victorious military campaign[6]. But the hasty vote of 23 September seemed not to culminate a process of a post-Soviet Reconquista, but to replace it as the Russian army is not in a state to control even in parts of Ukrainian regions that are supposed to express themselves in favour of joining the Russian Federation. As a result, the supposed “reunification” seems meaningless not only from the point of view of international law but also as a political practice, and is perceived as such not only by the West but by Russia’s allies as well[7].

International opinion would probably have no choice but to accept the change of the territorial status quo (as it de facto did in 2014) once it is gained ‘on the ground’ and secured by military means. But it is not and late September’s Kharkiv counteroffensive of the Ukrainian army demonstrates that Russia’s control is neither strong nor long-lasting[8]. And this means that Russian declarations concerning the incorporation of the ‘republics’ not only have no juridical power but a weak political meaning as well, and will not be taken seriously as a red line either by Ukraine[9] or by its Western allies[10] as well as by the international community as a whole[11] . This will escalate the conflict instead of terminating it as it was intended by the Kremlin[12], forcing Russia to invest more of its human and material potential into a conflict that is losing an evident objective.

But an explicit sponsoring of separatism and a devastation of territorial status quo abroad may have long-lasting consequences at home given the complicated nature of Russian federalism. If a part of Ukraine may be declared independent by another country in certain circumstances, it is not unimaginable that the same happens to a number of national republics inside the Russian Federation, especially given the existence of much stronger juridical, ethnic, cultural, and historical reasons which may activate once the political factor (Moscow’s control) weakens. If the genie of separatism is let out of the bottle, it may not be easy to persuade the populations of North Caucasus or Povolzhye that they have less rights for self-determination than the inhabitants of Donbass or Kherson.

The post-Soviet territorial order was fragile enough even before the referendums and once the separatist taboo is lifted, the border-change solution may become a ‘regular’ way of dealing with problems. If the right of the strongest predominates the strength of the law, territorial cohesion of Russia depends only on the balance of power between Moscow and the regions, and given the very pessimistic prospect of Russia’s economic development in the predictable future[13] combined with a nearly total international isolation of the regime, self-determination precedent played in Ukraine may backfire at home. By trying to reverse “the greatest geopolitical catastrophe of the century”[14], Russian President Vladimir Putin may actually activate processes that will lead to its repetition, creating a new geopolitical reality; that is to say, a post-Russian space. All major factors that historically led to the Soviet Unions’ implosion are already present, their reversal is hard to imagine in the foreseen future and thus it would be unrealistic to exclude a synergic effect in which they may result.

That is why the decision to carry out referendums and formally annex Ukrainian territory may change regional dynamics much deeper than the war itself. And once the existing legal framework is broken, the motivation to stick to old rules decreases, opening space to all possible outcomes both outside and inside Russia.