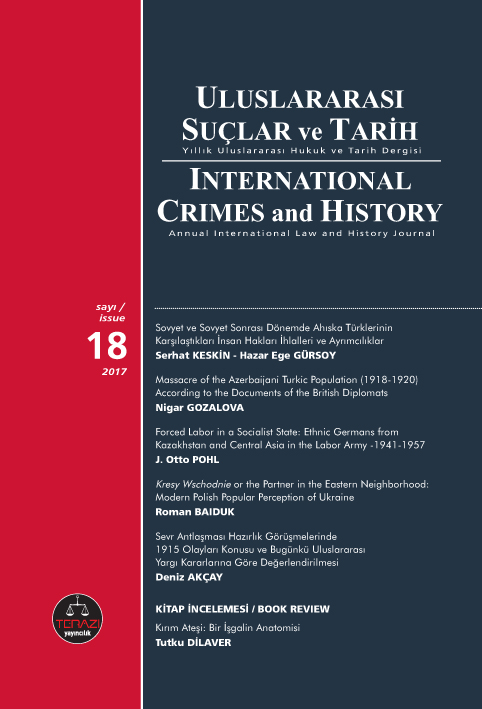 The 18th issue of Uluslararası Suçlar ve Tarih / International Crimes and History (UST / ICH) consists of five articles (two in Turkish and three in English), and a book review in Turkish.

Sovyet ve Sovyet Sonrası Dönemde Ahıska Türklerinin Karşılaştıkları İnsan Hakları İhlalleri ve Ayrımcılıklar (Human Rights Violations and Discriminations Against Ahıska Turks in the Soviet and Post-Soviet Periods) authored by Serhat Keskin and Hazar Ege Gürsoy in Turkish addresses the Ahıska Turks that lived in the Samtskhe-Javakheti region within the borders of the present-day Georgia and were exiled to Central Asia in 1944 for allegedly posing a threat against the security of the Soviet Union. In this study, authors thoroughly analyze the historical and legal dimensions of the rights violations the Ahıska Turks were subjected to in the Soviet and post-Soviet periods. In this framework, authors carefully examine Russia’s attitude towards the Ahıska Turks settled in Krasnodar and Georgia’s policies regarding the return of the same group.

In 1918-1920 Transcaucasia witnessed bloody conflicts among Azerbaijanis, Armenians and Georgians. Even today, memories of these events are among the factors that influence the relations among these three nations in the region. The article titled Massacre of the Azerbaijani Turkic Population (1918-1920) According to the Documents of the British Diplomats written in English by Nigar Gozalova studies the massacres perpetrated in 1918-1920 against the Azerbaijani Turks by the armed Armenian gangs with the outright support of the government of the Armenian Republic through the documents penned by British diplomats.

In the USSR, especially during the Stalin period, policies aimed to oppress and liquidate individuals and groups who were perceived as being dangerous are presently a well-known and generally accepted historical fact. Political opponents and many non-Slavic ethnic groups such as the Ahıska/Meskhetian Turks, Crimean Tatars, Chechens, Ingushs, Finns, Lithuanians, Estonians, who were deemed dangerous, were subjected to forced relocation during and after World War II. In addition, during the war, many Soviet citizens were forced to join the “labour army” without their consent. In his article titled Forced Labor in a Socialist State: Ethnic Germans from Kazakhstan and Central Asia in the Labor Army - 1941-1957 written in English, J. Otto Pohl addresses the ethnic German Soviet citizens who were forcefully employed in the Soviet labor army.

Mutual perceptions, narratives and discourses are among the factors that affect relations between nations and states, as much as perceived interests and threats do. It is seen that mutual perceptions and discourses are shaped and justified through different interpretations and representations of past events. It is also seen that dominant political ideologies are important determinants in the formation of these interpretations and representations. In his article titled Kresy Wschodnie or the Partner in the Eastern Neighborhood: Modern Polish Popular Perception of Ukraine (in English), Roman Baiduk examines the perception of Ukraine in the modern Polish community within the context of the shift towards right wing politics in Poland.

In recent years, especially in the Western world, the “genocide against the Armenians” perpetrated by the Ottoman Empire and the Turkish Republic during and after World War I is a claim that is frequently brought to the public and political agenda. However, most of the arguments made in this framework ignore the fact that genocide is a clearly stated legal term, and tend to make certain judgments instead of attempting to comprehend different dimensions of the events generically labelled as the 1915 events. It is seen that this approach fails to contribute to the comprehension of the 1915 events. Deniz Akçay in her study titled Sevr Antlaşması Hazırlık Görüşmelerinde 1915 Olayları Konusu ve Bugünkü Uluslararası Yargı Kararlarına Göre Değerlendirilmesi (The Handling of the 1915 Events at Preparatory Meetings of the Treaty of Sevres and Its Assessment in the Light of the Contemporary Court Rulings) (in Turkish), analyses how the 1915 events were discussed at the preparatory meetings of the Sevres Treaty in 1920 (that became null and void by the signing of the Lausanne Treaty in 1923), how the International Court of Justice interpreted the United Nations Charter, and through these, examines whether it is possible to legally define the 1915 events as a genocide.

Lastly, this issue of the UST / ICH presents to the readers a review of Kırım Ateşi: Bir İşgalin Anatomisi (2017) (The Ember of Crimea: The Anatomy of an Invasion) authored by Gönül Şamilkızı, a book that documents Russian Federation’s invasion and illegal annexation of Crimea in 2014, prepared by Tutku Dilaver.

After earning her Ph.D. (Doctorat d’Etat en Droit Public) from Nancy-Université in 1982, between 1986 and 1988 Deniz Akçay worked as the legal advisor of BNP-AK Bank. In 1988, she began working as a law expert at the Permanent Representation of the Republic of Turkey to the Council of Europe. In 1998, Deniz Akçay was granted the title Government Joint Legal Agent by the decree of the Council of Ministers of the Republic of Turkey. She was elected as the Vice-Chair Person of the Council of Europe Steering Committee of Human Rights and then as the Chair Person of the same committee in 2005 and 2007, respectively. Deniz Akçay retired in 2010.

Roman Baiduk is the Head of the Department of Legal Affairs and International Cooperation at the Academy of Patrol Police in Kyiv, Ukraine. He holds a master of law degree from Dnipro National University and a master of arts degree in European Interdisciplinary Studies from the College of Europe. His academic interests include International Relations in Europe, especially in Central and Eastern Europe, democracy studies, and security studies.

Tutku Dilaver graduated from Ankara University Faculty of Political Sciences Department of International Relations in 2015. In 2016, she began pursuing her master’s degree at the Caucasus Studies Program at Ankara Yıldırım Beyazıt University Department of International Relations. She is a scholar in residence at Center for Eurasian Studies. Her areas of interest include EU-South Caucasus relations and Turkish-Armenian studies.

Nigar Gozalova is a senior researcher at the Institute of History, Azerbaijan National Academy of Sciences. She gained her doctoral degree from the same institute in 2006. Her recent publications include Место Азербайджана в восточной политике Великобритании в первой трети XIX века (2017) (Azerbaijan in the Eastern Policy of Great Britain in the First Third of the 19th Century) and Azərbaycanın Türk- Müsəlman Əhalisinin Soyqırımı: Britaniya Kitabxanasının Arxiv Sənədlərində (1918-1920) (2017) (The Genocide of the Turkish Muslim Population: Archival Documents in the Library of Britain). Nigar Gozalova’s current research focuses on the history of the South Caucasus with a special emphasis on the Armenian-Azerbaijani war of 1918-1920.

Hazar Ege Gürsoy completed her master’s studies at Middle East Technical University (METU) Eurasian Studies Master’s Program in 2011. She is currently a research assistant at the Eurasian Studies Master’s Program and a Ph.D. candidate at the Doctoral Program in Area Studies at METU. She has been conducting extensive field research in the South Caucasus since 2010. She is currently writing her dissertation on the social identity formation of Georgian IDPs. Hazar Ege Gürsoy’s research interests mostly focus on Georgia, forced migration, ethnic and religious minorities, identity and civil society.

J. Otto Pohl is currently an assistant professor in the Social Sciences Department at the American University of Iraq, Sulaimani. He earned his Ph.D. in History from the School of Oriental and African Studies at the University of London. He is the author of the books titled Ethnic Cleansing in the USSR, 1937-1949 (1999) and The Stalinist Penal System (1997), as well as numerous shorter pieces.