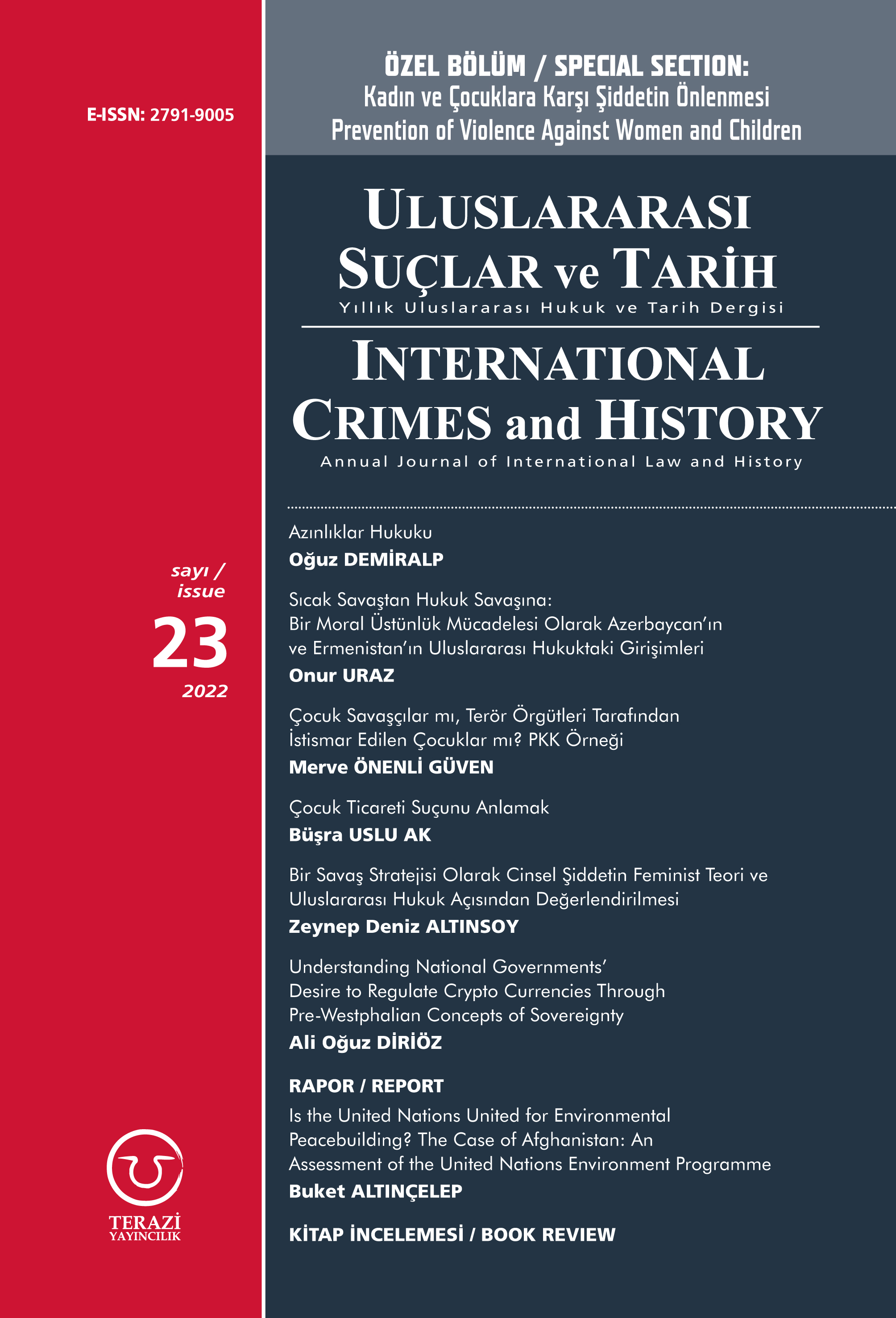 The COVID-19 pandemic is not absolutely over yet. In addition to the problems that COVID-19 has created in every walk of life, in 2022 at the top of the world agenda has been the Russian invasion of Ukraine. The Ukraine crisis has had effects in several fields, including International Law, International Relations, Sociology, Economics, Energy and Science and Technology. In this challenging period, the whole world has tried to adapt to new conditions and changes. During this period drastic changes with sociological, political, and economic implications occurred both internationally and nationally. Separatist tendencies, racism, and problems created by the legacy of history has resurfaced. A surge in migration has created and caused the rebirth of victimizations, particularly of women and children. The current issue of the journal deals with these emerging issues along with its traditional topics.

The commentary penned by Ambassador (R) Oğuz Demiralp is titled “Law of Minorities”. In his commentary, Demiralp concisely tries to put forward the term in the context of its definition and importance in the modern era.

The article in the “The Cases Before International Courts” section titled “War in the Field Transforms into Legal War: Azerbaijan's and Armenia's Initiatives in International Law as a Struggle for Moral Supremacy” Onur Uraz examines the Second Karabakh War that ended in the field which has now been moved to the courtrooms. The article examines the legal proceedings which the parties have started against each other by employing different means.

As part of the expansion, the 23rd issue of the UST/ICH will include a special section entitled “Prevention of Violence against Women and Children.” The aim of this section will be to contribute to the literature of prevention of violence against women and children. This is a special challenge in current international environment where violence has increased in which women and children have especially become particularly vulnerable. It will consist of three articles.

In the special section, the first research article, by Merve Önenli Güven titled, “Child Soldiers or Children Who Are Abused by Terrorist Organizations: The PKK Case” investigates the presence of the children in the terrorist organizations and their human resource profile. It focuses on how the meaning of children recruitment in terrorist organizations should be evaluated and its relations to international law.

The second research article titled “Understanding the Crime of Child Trafficking” by Büşra Uslu Ak deals with Child trafficking. The article focuses on child trafficking, its common causes, its biopsychosocial effects on children and the general profile of its victims and the elements that should be focused on in the fight against child trafficking.

As another part of the expansion of the subject areas, UST/ICH presents, integrated Science and Technology studies and International Law article entitled “Understanding National Governments’ Desire to Regulate Crypto Currencies Through Pre-Westphalian Concepts of Sovereignty” by Ali Oğuz Diriöz. The article deals with Crypto currencies, electronic currencies, and block chain financial technologies (Fintech), and how the national governments are trying to put certain regulations upon them. The article focuses on the Crypto currencies, electronic currencies, block chain financial technologies and the pre-Westphalian notion of the sovereign and independent nation state.

In the Reports section, Buket Altınçelep, in her article titled “Is the United Nations United for Environmental Peacebuilding? The Case of Afghanistan: An Assessment of the United Nations Environment Programme” examines the linkages between environment, security, and conflict. The study analyse the growth, the impacts of environmental problems (such as scarcity, resource curse, etc.) that have begun to be seen to have effects on the peacebuilding processes.

The book review by Ahmet Can Öktem analyzes Hans Barth’s book titled “O Turk, Wake Up”. Öktem in his analysis draws attention to the anti-Turkish British politics, missionary schools, foreign diplomats, foreign press, large-scale propaganda activities against the Ottoman Empire and the role of these activities in the emergence of the “Armenian Question” in the late 1800s.

We hope you will enjoy the 23rd issue of the journal and extend our best wishes for the coming period and year.

Merve Önenli Güven got her bachelor’s degree from International Relations department of Bilkent University in 2003. She took her master’s degree with her thesis “Mirror Images of Terrorist Incidents in the News: News Coverage and Problem-Solving Attitudes Towards Conflicts” from Conflict Analysis and Resolution department of Sabanci University in 2005. Önenli Güven had 16 years work experience in the fields of public, academia, and non-governmental organizations. She obtained her PhD with her thesis “Construction and Re-Construction of Cultural Codes through Political Violence: The Case of Kurdish Nationalism” from the department of Political Science and Public Administration of the Middle East Technical University in 2021. Her research areas focus on social psychology and political psychology based on radicalization, conflict analysis and resolution, terrorism, and counter terrorism. Önenli Güven has been continuing her studies as an independent researcher.

Dr. Ali Oğuz Dirioz is an Assistant Professor of International Relations and Globalization at the Department of International Entrepreneurship at TOBB University of Economics and Technology (TOBB ETU). He is also an Adjunct Professor at the Department of Political Science and International Relations at TOBB ETU, and since 2020 Adjunct Prof. with the TOBB ETU Tashkent, Uzbekistan Branch. Prior to TOBB ETU, he was a lecturer at Bilkent University’s Department of International Relations.Dr. Dirioz was previously a consultant for the World Bank where he worked on the Status of Water Sector Regulation in The Middle East and North Africa (2017). Dr. Dirioz’s interests include globalization, international relations, diplomacy, energy and environment, Turkish politics, and the role of businesses as well as non-state actors in foreign policy. Recent publications include “Addressing climate change through the water–energy–food nexus; Lessons learned from Turkey” (2021), “The Prospects of Natural Gas Organization in the Light of Qatar’s OPEC Exit : Some Critical Reflections The Extractive Industries and Society” (2020), and “Watering Down Tensions: The Role of Securitisation in Water Cooperation” (2020). He is currently Vice President of the Association for International Economic Research and Studies (ECONFO), and is an affiliated academic with the Foreign Policy Institute (FPI). He is fluent in French, English and Turkish (native).