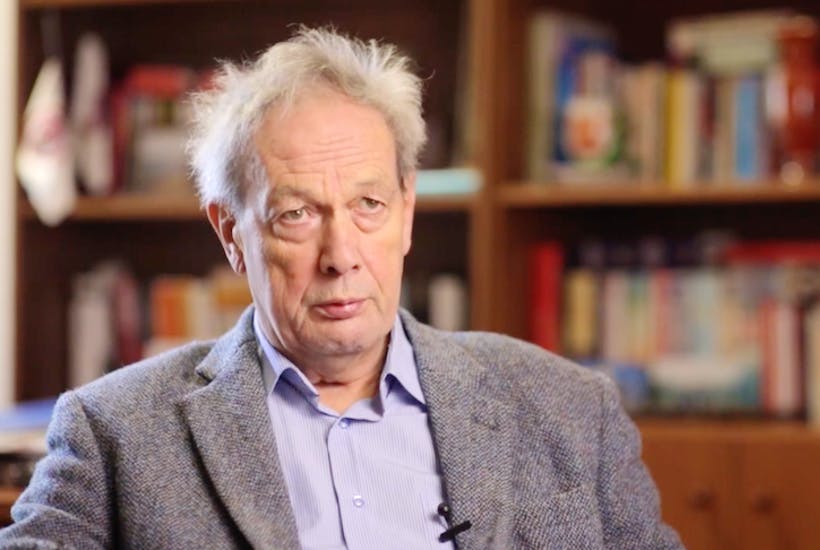 Norman Stone has died at the age of 78. In 2007, Harry Mount paid tribute to the historian and author, republished here:

It’s four in the afternoon in the Garrick Club and Norman Stone is steaming with rage. The steam is not alcohol-fuelled. Professor Stone — historically no flincher from the glass — is on the wagon at the moment but is feeling no undue withdrawal pangs. He is, though, longing for a cigarette, and his beloved Garrick has just outlawed smoking, in line with the new legislation.

‘It’s quite clear that cigarettes calm you down, the opiate of what was once the working classes,’ says Stone once he has lit up and sat himself down on a pavement stool outside a Covent Garden pub. ‘If you take them away and you make booze so cheap, you end up with the Cornmarket [Oxford’s main shopping street] on a Friday night. Awful.’

It was Lenin, Stone tells me, who was responsible for the first non-smoking train in history, the one that took him through Germany to Finland after the Russian Revolution. Like Lenin, Hitler was an anti-smoking fanatic; you knew the moment he’d died because his officers started lighting up in the bunker.

Little details like these are what make Stone’s new book on the first world war a gem, albeit a very little gem — 187 pages, including maps, index and sources — on a big subject. It’s Stone’s first book for over a decade, the first since his decision in 1997 to leave one of the plum jobs of British academia — the Oxford Professorship of Modern History — and head for obscure Bilkent University in Ankara. In Stone’s years as the Oxford Professor he enraged students with his work for Rupert Murdoch as a Sunday Times columnist, and for Margaret Thatcher as a senior foreign policy adviser.

‘I left Oxford under a brilliant retirement scheme under which I was paid quite well to do nothing, rather than being paid badly to do quite a lot.’

For those, like me, who had been invigorated by his teaching, his departure was a sad thing. His methods were unorthodox, to say the least. It was almost impossible to get to hear one of his lectures. ‘Professor Stone is indisposed this morning,’ the porter at the Examination Schools lecture halls would say, his poker face denying you the chance to make a drink-related joke.

As a professor, Stone taught no undergraduates formally from his small rooms in Worcester College. His informal lessons, though, were quite exceptional. I got mine while playing bridge with him late at night in St John’s College in 1993. In between knocking back tumblers of student-grade red wine in one and accompanying his tape of Russian military marching tunes in a haunting Glaswegian bass, he sketched out the origins of the first world war and the reasons for the Balkans war, with a few asides on Thatcher and Murdoch. And he literally never missed a trick, memorising every card.

Countless undergraduates were inspired by his enthusiasm for teaching — unpaid, in voluntary sessions, as often as not in the pub. He taught one friend German from scratch in the Mitre, next to those Examination Schools.

Despite the fond affection in which he is held by many former students, Stone regrets little about his departure from Oxford. His heart lifts every time the plane hits the Istanbul tarmac — where he also teaches, at the city’s Koç University. The Turkish students, he says, are a model to their British counterparts — clever, industrious. ‘And they smell less.’

The modern student’s sanitary habits aren’t the only things that depress Stone about Britain. The educationally aspirant country that Stone knew growing up in Glasgow has gone. He went to the fee-paying Glasgow Academy on a scholarship for the children of dead servicemen — his father, a lawyer, was killed in the war.
‘I come from the same world as Niall Ferguson and Neil MacGregor. The schools were astonishingly decent, even if we were taught by Englishmen. I remember having to translate things into German like, ‘With the oars flashing in the sunlight, the rowlocks glinting, the skiff slipped upriver against a north-east wind,’ — Stone pauses for effect ‘ — Antonia Fraser.’

This little comic masterpiece is delivered deadpan, with Stone only collapsing into conspiratorial laughter once he has delivered the punchline. Like a lot of clever, sensitive people, Stone uses humour to deflect any sign of showing off, dropping in a gag to clear the air when it gets too thick with difficult thought. Just when he’s lost you on the beginnings of the first world war, he’ll drop into alluring anecdote. In 1914, he says, the Russians were so desperate to win that the Tsar licked his own stamps. The masses foreswore vodka, unless foreigners were present. ‘By November 1914, foreigners were much in demand.’

Stone’s features, at the age of 66, reflect this mix of serious sage and Puckish wit. He looks like a cherubic barfly. His thick mass of hair is grey, his face heavily lined. But the Cupid’s bow of his mouth is forever puckered, his eyebrows raised, as if he’s constantly on the verge of a joke. Even when he’s giving a serious opinion on the dumbing down of Britain, he peppers it with playful words and one-liners.

‘When I went up to Caius in November 1958, I was a know-all Scottish blob at one of the last great institutions. The ex-RSM porter came and cleaned your shoes.’

The Sixties did for all that, Stone thinks. ‘It was all from a desire to be fair. Public standards had to fall so that more people can aspire to them. It was utterly misguided egalitarianism; an utterly spoilt decade. A.J.P. Taylor said that all the problems had been solved.’

Even as a schoolboy, Stone had been a conservative. ‘At the 1951 election, I was ten, and my mother said, ‘Think about those poor miners.’

‘Support Churchill,’ I said. She was a bit of a Scottish liberal sentimental Leftie.
And so began a decades-long disappointment with the Tories. ‘The Seventies was a shabby, unthinkable decade. I didn’t think we’d ever get out of it.’

When Heath caved in to the miners, Stone buckled and voted Liberal. And then came Thatcher, whose victory over the miners reinvigorated Stone’s conservatism. He worked for her in the late 1980s, principally in the build-up to German reunification.

‘I wasn’t much more than a spear-carrier. I was late on the scene — a stormy petrel. When Stone hoves into view, you’re sunk.’

Still, he enjoyed the Thatcher years enormously. ‘Oxford was run by the hand of lunacy then. To look on the face of Roy Jenkins in the Thatcher years was a poem — an intelligent but rather unimaginative man in a state of constant but incipient shock.

‘The dons’ snobbery to her was extraordinary. Dame Mary Warnock, born into the long-bottomed knickers purple of Edwardian progressiveness — when she saw Mrs Thatcher, all she could say was, ‘Those hats …’.

‘Do you remember those 364 economists writing to the paper in 1981 saying what a disaster Geoffrey Howe’s policy was? The next day, growth rates went up 25 per cent,’ Stone says, burying his chin in the hollow of his collar bone as he doubles up with laughter.

Despite her brilliance, Mrs Thatcher couldn’t save her old university. ‘There’s certainly some tissue-regeneration but it’s not what it was,’ says Stone of Oxford, where he has kept the house he shares with his second wife and their son, now entering his last year at the university. He has two sons (one the thriller writer, Nick Stone) by his first marriage to the niece of Papa Doc Duvalier’s finance minister; Stone spent two years in Haiti in the 1960s, learning Russian.

‘It whispered the last enchantments of the ancien régime — bridge by the Caribbean.’

Returning to the reasons for Oxford’s downfall, Stone blames co-education as one of the chief culprits. ‘The women became terribly distracted and the men drank a little more when they were admitted into all-male colleges — they can be terrific maenads.

‘And then they settle in together in their rooms, get a microwave and a telly, and play housey-housey.

‘I remember at Jesus in 1972 when they voted on letting women in. Like so often, they said the right thing for the wrong reason. They were swayed by contempt.’

‘I remember a man who lectured on the history of Russian revolutionary film. He said that women shouldn’t be admitted because they wouldn’t be happy to walk on the toast crumbs left by the Boat Club tea.’

‘Toast crumbs!’ Stone booms with glee to the bemused passers-by walking down Garrick Street. Shortly after, he heads off in the same direction, past the Garrick and back to Ankara – Oxford’s loss, Turkey’s gain.