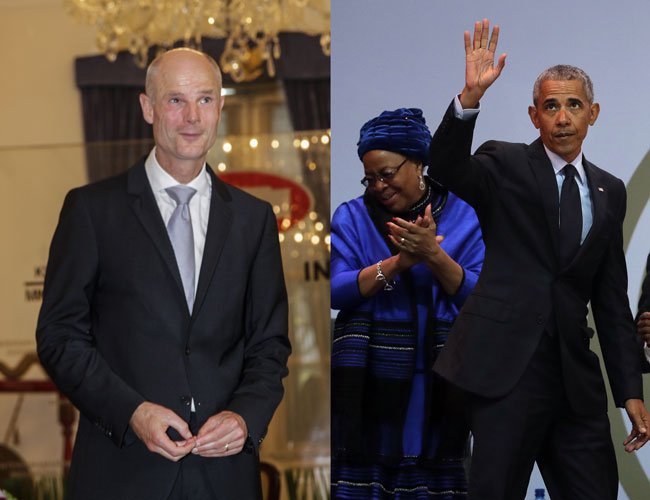 On 18 July, former US President Barrack Obama made a high profile speech in South Africa during the 2018 Nelson Mandela Annual Lecture organized by the Nelson Mandela Foundation. The 2018 Lecture’s theme was “Renewing the Mandela Legacy and Promoting Active Citizenship in a Changing World.” According to the website of the said foundation, the “lecture focused on creating conditions for bridging divides, working across ideological lines, and resisting oppression and inequality.” Obama’s speech was considered by the international press as “his most important speech since leaving office” and mostly deemed to be a “strong rebuke to Donald Trump without once naming the sitting [US] president.”

Obama’s speech involved strong references to racial discrimination, colonialism, and white supremacism. He stated that “most of Africa… was under colonial rule. The dominant European powers… viewed this continent and its people primarily as spoils in a contest for territory and abundant natural resources and cheap labor. And the inferiority of the black race, an indifference towards black culture and interests and aspirations, was a given.” He continued with the assessment that “certain races, certain nations, certain groups were inherently superior, and that violence and coercion is the primary basis for governance, that the strong necessarily exploit the weak…” After analyzing the contradictions of the existing international order, he warned that “we now see much of the world threatening to return to an older, a more dangerous, a more brutal way of doing business” and observed that “…whatever laws may have existed on the books, whatever wonderful pronouncements existed in constitutions, whatever nice words were spoken during these last several decades at international conferences or in the halls of the United Nations, the previous structures of privilege and power and injustice and exploitation never completely went away.”

Obama, in this context, stressed that ethnic and religious differences still determine who gets opportunity and wisely warned that “countries which rely on rabid nationalism and xenophobia and doctrines of tribal, racial or religious superiority as their main organizing principle, the thing that holds people together – eventually those countries find themselves consumed by civil war or external war.” He concluded with the following striking observation: the “plain fact that racial discrimination still exists in both the United States and South Africa.”

In astonishingly remarkable coincidence, at the very same date of the Obama’s speech, the international press reported the following statement by the Minister of Foreign Affairs of the Netherlands Stef Blok during a private meeting with Dutch people who work for international organizations; “give me an example of a multi-ethnic or multicultural society where the original population still lives (...) and where there is a peaceful society. I don't know of one." According to Minister Blok, every society has boundaries when it comes to taking in immigrants. He called it "very nice" to have a Turkish baker around the corner, but added that there can be some “side effects”. He also reportedly said that it is genetically determined that different groups of people cannot get along with each other. He was quoted as saying; "It's probably somewhere deep in our genes that we want to have a well-organized group to hunt with or to maintain a village with. And that we are not able to connect with people unknown to us."

In one of our previous articles, we asserted that “xenophobia involving aggression and violence has now reached extreme levels and has taken the place of old-style racism. Racist forms of discrimination have metamorphosed into publicly-accepted extreme xenophobia.” The words of one of the pivotal ministers of one of the most socially progressive countries serve as a chilling reminder that racism is alive and thriving in the world. The world should pay attention to the wise advices of Obama.