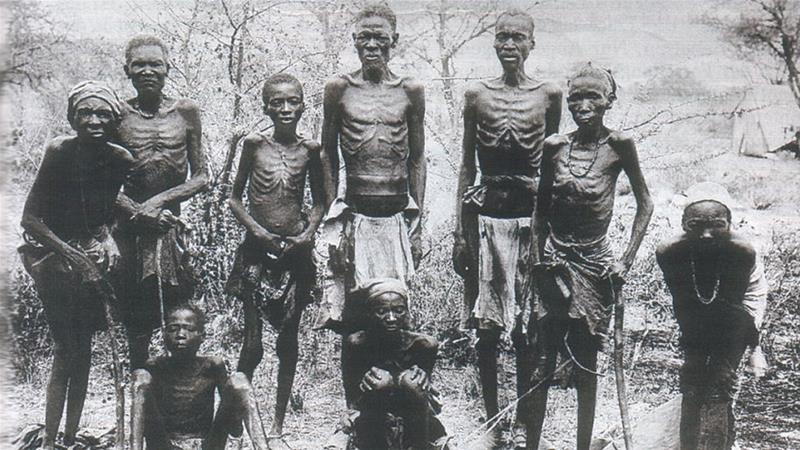 'The Nazis didn't fall out of the sky, there is a deeper racist, xenophobic mindset in German history.'

Mnyaka Sururu Mboro walks through Wedding, a district in the northwest of Berlin, with an expression of disdain. "It makes my stomach turn every time I go down these streets," he says.

He is in the African Quarter, so-called because the streets have been named in commemoration of Germany's imperial leaders and conquests from the end of the 19th century.

One street, Peters Allee, has a particularly negative effect on Tanzanian-born Mboro. It was first named so after Carl Peters, the founder of Germany's colony in South East Africa, and a man glorified by the Nazis. For Mboro, who has been living in Germany since the 1970s after arriving on a scholarship, it represents a period of violence and oppression for his family and motherland.

"As a child growing up in Kilimanjaro, I would often sit outside with my grandmother at night and listen to her tell fairy tales," Mboro recalls. "One night she told me to look at the moon, which was full that night. After some minutes she asked if I could see the shadow on it. Doesn't it look like a person, she said. I looked again.

"That, she said, is a German man called Carl Peters. He was the governor of the Kilimanjaro area and we used to call him Mkono Wa Damu - bloody hands."

Little is known in mainstream German society about figures such as Carl Peters, or the nation's role as a coloniser between the 1880s and the early 20th century. Sociologist Serpil Polat says the topic has remained on the margins of analysis.

"Colonisation has not been the focus of the nation's narrative," Polat, who works at a migration academy linked to Berlin's Jewish Museum, explains. "On the one side, there is a lack of knowledge and if it is talked about, we have a sense of nostalgia mixed with the thinking that what Germany did wasn't as bad as other European colonisers. So a critical approach hasn't really happened so far."

However, recent developments in mainstream and civil society suggest that Germany's understanding of its colonial history may be evolving.

Much of the pressure is coming from a strong anticolonial grassroots movement, including people like Mboro, who have been raising awareness around the issue and campaigning to have the streets in the African Quarter renamed.

Berlin has addressed some of the issues around the renaming of the streets. In the 1980s, Berlin declared that Peters Allee would be named after Hans Peters, an anti-Nazi hero. But activists and campaigners say the city hasn't gone far enough. As the street is still called Peters, the association with Carl Peters remains strong, they say.

Alongside this, the prominent Deutsche Historische Museum in Berlin recently hosted its first large-scale exhibition on German colonisation and is planning a permanent exhibition in the next few years. Outside the capital, Hamburg University set up a research centre two years ago to examine the port city's colonial legacy, mapping the cityscape and the buildings from that era.

Internationally, descendants of Namibians killed during the colonial period are seeking reparations from Germany after it admitted to a genocide that took place in 1904. Germany is refusing to pay reparations and didn't attend the first hearing in the US in March. Namibian activists are now working towards a second hearing date in October.

Germany was an empire for about 30 years after its unification in 1871. But for at least three centuries before, German-speaking predecessor states and private business were profiting from colonial ventures, including the slave trade.

Amid the European scramble for Africa, Germany established the colony of German South East Africa - a region that included present-day Tanzania, Rwanda and Burundi. It also governed German South West Africa, an area comprised of present-day Namibia, Cameroon, Togo and Ghana. It only relinquished these territories after its military defeat in World War I.

The stories of Germany's imperial violence are intertwined with these Berlin streets. Peters Allee, named in 1939 by the Nazis, celebrates a man who subjected locals to forced labour, high taxes and exploitation.

It's a story that 66-year-old Mboro knows well. During colonial rule, his paternal great grandfather was ordered to build a railway line.

Fed up with the inhumane treatment, one day he and a few of his co-workers decided to burn their picks - sururus, in Swahili - to escape work. But they were caught. Mboro, whose middle name is Sururu, says: "My grandfather never met his father as he was killed by the Germans while his mother was pregnant. But he was named Sururu after him. I was never told how the Germans executed my great grandfather but I am very proud to have his name."

In Tanzania, the Maji Maji war, an armed uprising against German rule, was brutally crushed. According to some estimates, 75,000 people were killed by the Germans over the course of two years.

Mboro heads towards Swakopmunder Strasse, named after a town in western Namibia. It was in Namibia that Germany erected its first concentration camps.

In 1904, the local Herero and Nama people rose up against German rule and, during four years of fighting, a reported 65,000 Herero people and 10,000 Nama people were killed or starved to death in the camps. It was the first genocide of the 20th century, the tribes of Namibia insist.

The streets all meet at one main square, Nachtigalplatz, named after Gustav Nachtigal, the founder of Germany's West Africa colony.

What's emerging as the topic of colonisation enters the national psyche is a debate around what it means to be German.

The country's post-war identity has been built around the rejection of Nazism. But more and more, activists and historians are finding evidence that links the Third Reich to the German Empire that preceded it.

They now argue that German society cannot fully reject the racist ideology of the Nazis without looking at its colonial roots.

He explains: "Germany has more or less settled into an understanding that you can't justify the Nazis and what they did, so now the debate is, was this an exception within a good German history, or is it a continuation of German history prior to 1933? Pointing to colonial violence, colonial crimes and human rights violations of the Herero people is a strong argument.

"The Nazis didn't fall out of the sky, there is a deeper racist, xenophobic mindset in German history."

In his 2005 Yale University paper From Africa to Auschwitz, US historian Benjamin Madley outlines some of the links between the empire and the Third Reich.

"Settlers and their advocates rationalised taking African land and wealth by claiming inherent German superiority and martial necessity," he wrote. "Then they supported these stories with force. It was the same simple, brutal logic Hitler employed in Eastern Europe when he wrote of the 'right to possess soil', German racial superiority and acquiring Lebensraum (living space) 'by the sword'."

Berlin-based human rights activist Joshua Kwesi Aikins says: "We could say that Namibia, in important ways, foreshadowed what was to come at Auschwitz.

"This can lead to very heated debates where some people have asked if I am comparing the genocide in Namibia with what the Nazis did. But to compare isn't the same as to equate and it's important to have the category of genocide to understand the depth of the violence," explains Kwesi who is a political scientist at the University of Kassel.

Other links between the Second and Third Reich include some individuals, such as the father of senior Nazi leader Hermann Goering, Heinrich, who was the first governor of colonial Namibia.

Activists say the time has come for the nation to face up to its colonial crimes.

"In German discussions, racism is often limited to intentional, individual acts which you can then morally condemn," Kwesi says.

For Mboro, it's the reality he sees every time he returns to Tanzania that make it an important issue today.

"We know the reasons why Tanzania is in poverty. Germany wants to keep this topic under its hat because they only want to show one side of what happened. But history has happened, and it cannot be changed."