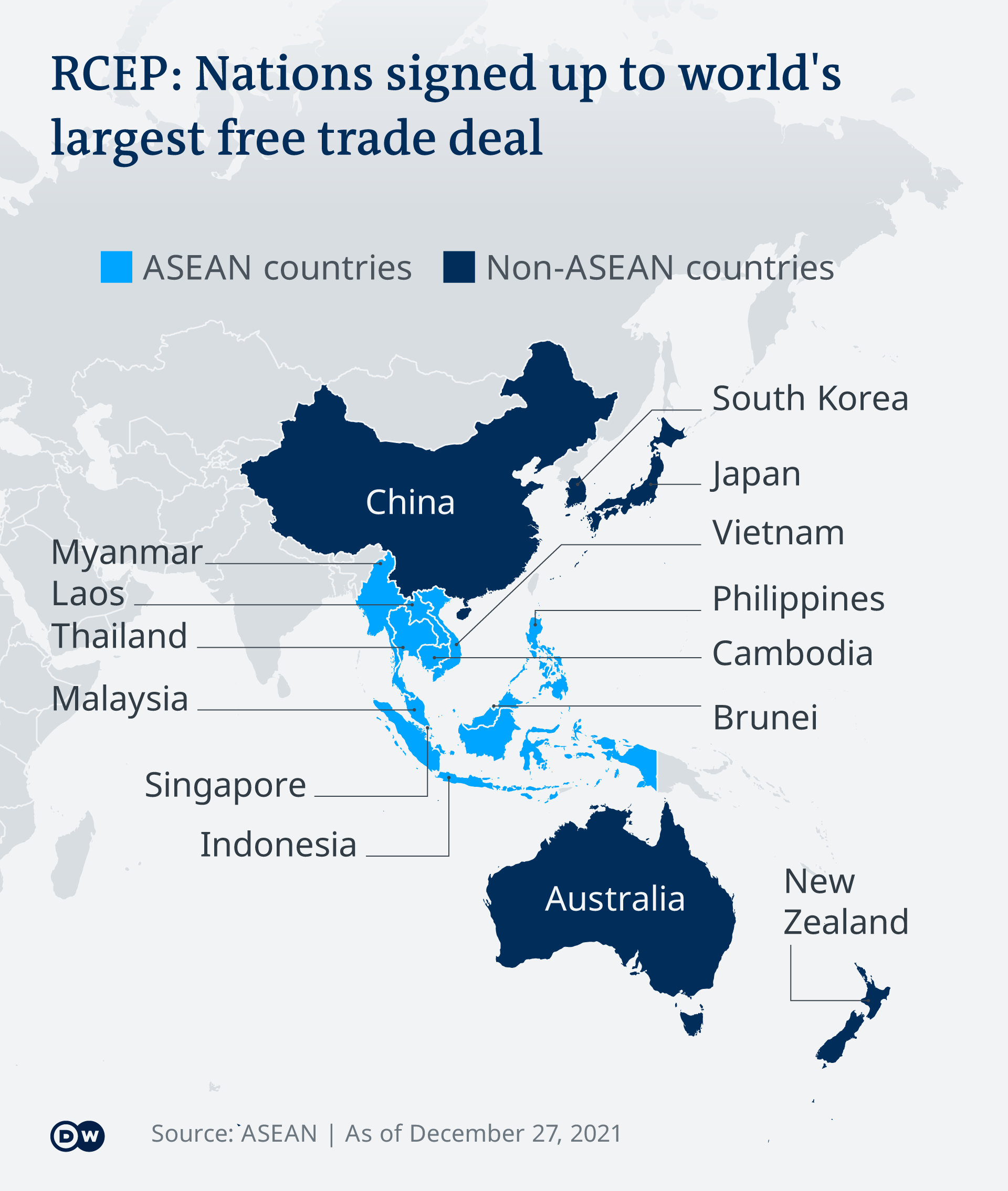 On the first day of 2022, the Regional Comprehensive Economic Partnership (RCEP), which is a trade deal between Asia-Pacific countries, went into effect[1]. With this, the largest trading bloc in the world consisting of 30.5 percent of the global GDP (around 26.2 trillion dollars) and one third of the world economy[2] has formed.

The size of the RCEP can be further understood when compared with the other trade blocs such as the US-Canada-Mexico Agreement (USMCA) and the European Union, comprising 28 percent and 17.9 percent of global GDP[3] respectively. It has been commented that the size of this trade bloc makes the Asia-Pacific region “a center of gravity” for global trade, as RCEP will enhance the region by setting common rules to trade, intellectual property and e-commerce[4].

Composed of 15 countries (China, Japan, South Korea, Australian, New Zealand, and 10 member of Association of Southeast Asian Members (ASEAN))[5], RCEP will bring many advantages to the signatory countries as well as to the world economy. To start with, RCEP aims to eliminate 90 percent of tariffs among its member countries[6]. By this way, it will increase the intra-regional exports as much as 42 billion dollars based on UNCTAD expectations, while other economists have suggested that RCEP can contribute 200 billion dollars to the global GDP[7]. In addition to this, it is estimated that RCEP will create employment to nearly one third of world’s population, which means 2.2 billion laborers[8]. Another advantage of RCEP can be considered the bringing of enhanced regional integration to the Asia-Pacific region[9].

Furthermore, RCEP will provide support for open, free, fair, inclusive, and rules based multilateral trading system as well as helping post-Covid 19 pandemic recovery in the region[10]. It is known that Chinese exports to other countries in Asia has increased by 260 percent between 2016 and 2021[11]. With its unique economic power, China stands as the major market in the region. For this reason, the post-pandemic recovery and its prospects depend highly on Beijing[12].

Finally, it is believed that RCEP will strengthen supply chains in the region and promote the participation of small and middle-sized enterprises to the regional supply chains[13].

However, as well as having economic advantages, RCEP also has potential disadvantages. First, many experts argue that RCEP will bring unequal advantages to the signatory countries. According to the former Vice President of the Kiel Institute for the World Economy (ifw-Kiel) Rolf Langhammer[14], China, which is the largest economic power in the region, will get most of the benefits, together with Japan and South Korea, while the other signatory countries will not get as much benefit[15]. Langhammer has argued that,

“the agreement is tailored to China’s interests, both on the import and export side. RCEP will give China tariff free access to key export markets like Japan and South Korea, while at the same time, securing access to import sourcing markets (ASEAN countries) for its huge manufacturing supply chain[16].”

Langhammer has implied that since the trade pact does not cover major industries, RCEP may bring disadvantages to the smaller countries in the ASEAN[17]. He further declared that, “many of China’s neighbors rely on rice shipments or the export of cheap labor, but neither services of agriculture are covered by this trade deal”.

Moreover, countries which can be classified as the least developed ones in Asia, such as Cambodia, Laos, and Myanmar, now have an interest from inter-ASEAN trade since they profit from it. However, RCEP may distract this trade flow, as Langhammer proposed[18]. To him, for instance, Singapore’s imports from less developed countries of Asia, such as Myanmar, may no longer be needed as Japan will have more trade access to countries in Asia[19].

For this reason, India has preferred not to join this trade pact, and its absence can be considered as a huge loss. India’s abstention from the bloc is reportedly based on the fear that the Indian economy would be hurt by cheap Chinese exports[20].

Besides India, the striking point about RCEP, which has been long criticized by the Western experts, is the lack of United States’ presence in this partnership. Indeed, according to the views of the Atlantic Council, a prominent Western think tank, the absence of the US may allow China to consolidate its role as the main source of economic growth in the region[21]. As a matter of fact, it would not be expected from the US to enter to the RCEP, since the main driver of the RCEP is Beijing, which is the rival of the US.

Meanwhile, another controversial part of RCEP is the membership of countries such as Japan, Australia, and South Korea. The membership of these countries highlights a crucial point; along with many ASEAN member countries, these three countries follow foreign policy closer to the US, which means that their policies are more aligned with the West than with China. In this sense, it would be logical to reassess the RCEP with this perspective, which may lead to the conclusion that the balance of international politics is shifting in favor of China.

To conclude, it can be said that the size and the possible advantages of RCEP makes it a trade pact that will have much influence in the region and in the world. It can be said that RCEP has the power to change the direction of global trade flows. However, it is estimated that this will primarily be influenced by the economic power and trade relations of China. Considering this, the possible outcomes and controversial points must be taken into consideration while analyzing RCEP.

[3] Shehadi, “The winners and losers of the world’s largest trade deal: the RCEP”.

[6] Shehadi, “The winners and losers of the world’s largest trade deal: the RCEP”.

[20] Robin and Reed, “Asia-Pacific countries sign one of the largest free trade deals in history”.