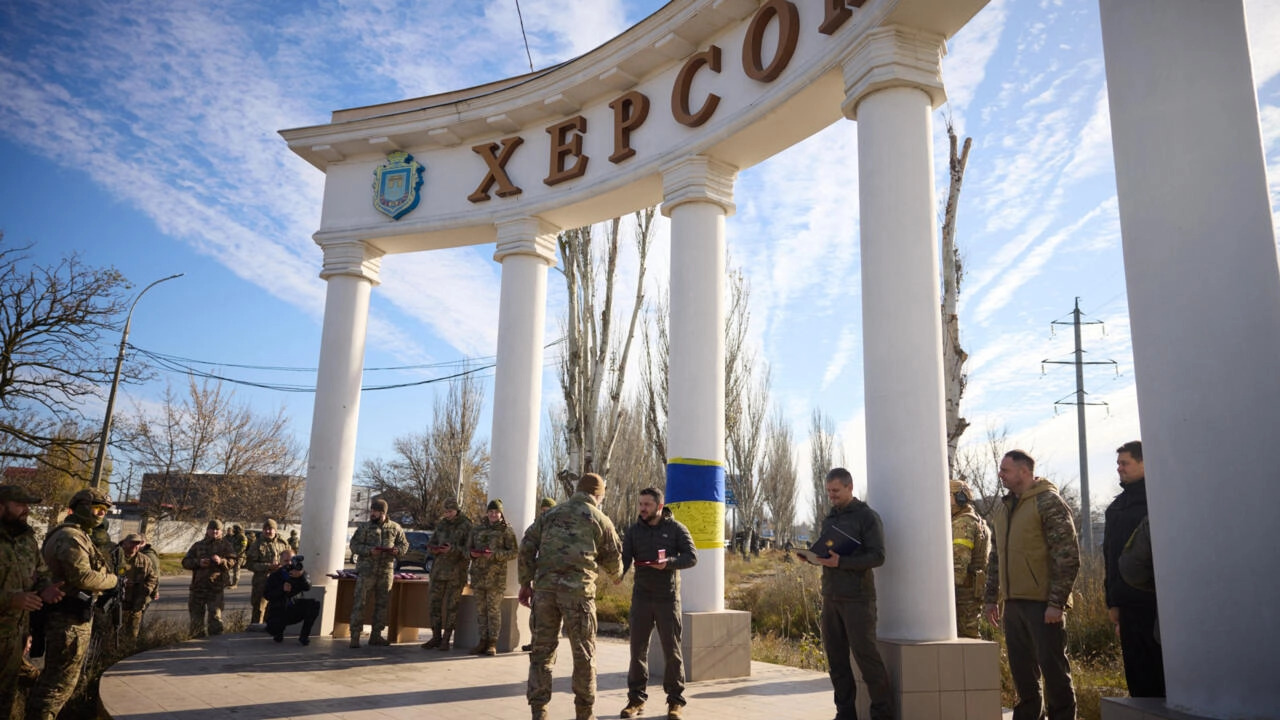 Ukrainian takeover of Kherson and the majority of the Dnepr West Bank constitutes a net military triumph and a strategic turning point in this war. However, its political outcome is far from being ultimately defined and carries certain risks for Kiev.

Russian control over Kherson (which is already a historic not a political fact) had a strong symbolic meaning that justified and legitimized Moscow’s discourse describing the reasons and consequences of this war. For centuries of its uneasy history, Dnepr River was the most evident (physically visible) symbol of a cultural and thus political division of Ukraine into its pro-European West and pro-Russian (or just Russian) East, affirming it to be, what Zbigniew Brzezinski called ‘a divided nation’, or, in Moscow’s interpretation, of not being a nation at all. From the point of view of any objective observer basing its analysis on facts (for example those reflexed in the election results showing repeated massive pro-Russian vote), Russian influence in the more or less all Eastern-bank regions of Ukraine was present and deeply rooted – not accidental and depending on political fluctuations but coming from national, cultural, linguistic and confessional identity – giving Moscow’s arguments (including those used in 2014 to seize Crimea and Donbass as well as those delivered by Russian President Vladimir Putin on the invasion day in February 2022) strong legitimacy.

But the West Bank was different story. If Ukraine was theoretically to be divided between Moscow and the West, Dnepr would be a natural border of supposed zones of influence with political ‘superstructure’ overlapping the cultural and social ‘base’ (to put it synthetically in terms of Marxist cultural theory). Therefore, if Russia passed this symbolic border as it did in February, the message sent to Ukraine and the rest of the world was clear; its strategy consisted not in seeking to stabilize the whole region of Eastern Europe by dividing Ukraine and balancing interests with the West, but to decompose Ukraine as a state and eliminate all non-Russian influence in extenso. That is why this war is very different from the Donbass intervention (that could be considered in terms of balancing interests in the framework of the existing order), and this fact, quite deplorably for Moscow General Staff’s planners, was very quickly understood both in Kiev and in the Western capitals; the difference lies not in the scale of military use but in the very gist of Russian strategic objectives (to devastate the existing order and try to establish a new balance).

In this context, Kherson was (for both sides) a visible proof that Russian strategy could actually work; it was rapidly and almost non-violently taken in the first days of the intervention, demonstrating the fact that neither the local population nor the Ukrainian army dislocated in the region showed any loyalty to Kiev or motivation to follow the rest of Ukraine on the route towards its “European choice”. The betrayal of the Ukrainian army commanders let the Russian Army easily seize the city of Kherson and the majority of the region which in the end turned out to be its major military gain during this war: the only but symbolically a very strong one showing not only Moscow’s determination to go westwards, but also the fact that (if in future the circumstances allow) it may really do it. That is why it was critically important for Kiev to regain Kherson, to wash away the disgust of first day’s treason and to close any discussion about Russia being able to put Ukrainian national integrity and thus its statehood into question (Russia calls Ukraine ‘the Kiev regime’ which stipulates that the ‘Western controlled’ capital has little to do with the ‘pro-Russian’ rest of the country).

With Russian forces out of Kherson and kayaking eastwards through the Dnepr, this symbolic problem may be considered solved, making Ukraine a military champion but nevertheless, leaving it with certain political problems that may turn out to be problematic during the months to come.

In its bilateral relations with Russia, it puts Kiev in a delicate position of being the aggressive side; perverse it may be regarding the fact that Ukraine is fighting on its own territory, the East-West symbolism of Dnepr division is not nullified and works both sides: by withdrawing its forces from the West Bank, Moscow is mirroring the situation presenting Kiev as the one invading the (supposedly Russian) East and thus the expansionist actor. Despite the pathetic tunes of state propaganda and Russian President Putin’s official optimism, Russia is clearly scaling down its operational aims, demonstrating its readiness to start the negotiations process based on the actual territorial status quo; detrimental it can be from the point of view of Ukrainian territorial integrity and the national pride, one cannot but notice that in this process Moscow has at least two non-deniable arguments; first, the acceptance of its conditions will effectively lead to the ceasefire and thus finish the kinetic phase of the war; second, this (the de facto territorial cession) already took place in 2015 (the Minsk Agreement) and nothing really catastrophic happened to Ukraine. The longer Kiev rejects Moscow’s offer, the easier it will be to present it as a non-constructive partner and therefore to blame it for the destruction caused by the war.

In its relations with Western partners Kiev may also start to face a growing wall of misunderstanding, let it be a glass one hidden behind the official declarations of compassion and support. The problem is that Ukraine and the West see this conflict from  very different perspectives; if for Kiev this is the ultimate existential test of statehood with its outcome to determine the very shape of the nation, the West predominantly perceives it through the pragmatic, realistic lens of regional, continental, and global balance of power. And, as after Kherson retreat, it is already obvious that Russian strategy of reversing the international order has definitely collapsed and showed that Moscow is in no state to structurally hamper Western interests in any way, the territorial compromise starts to look – once again, from Berlin, Paris or Washington, not Kiev – a reasonable way to terminate hostilities, relieve global economic turbulences and in the case of the US, to concentrate on China. That is why, being a military victory over Russia, the liberation of Kherson may also be a turning point in another way; a moment marking the start of a diversion of Ukrainian and Western interests that until now converged in the course of this war. And this is not a question of a Western cynical Machiavellianism but a simple example of how any fact of international life may have a different meaning for a small, medium, or a big element of the system.

Finally, there is an internal dimension coming with the liberation of the West Bank that Kiev cannot ignore. One of the objectives of the war that Russia started was to destroy Ukraine as a country – and if it turned out to be impossible politically – by one capital cut from the top – Moscow decided to do it from the bottom by physically devastating the infrastructure indispensable for any existence of population that could be described as ‘normal’ in terms of European standards. In other words, although Ukraine remains to be a functioning state with its president, government, and the military, it may very quickly find itself in being an empty one, theoretical, at least from the point of view of the reality existing in the regions that are either occupied by Russia or may potentially be invaded. And functionally, if not formally, this will mean that Russia acquired its objectives, because no social or economic life will be possible in those places until the threat of becoming a military target remains actual and this general feeling is confirmed by the constant outflow of its inhabitants, both internally and (which has direct influence on post-war potential of the country) abroad. It turned out that Russia has no means to destroy Ukraine as a political reality, but as the war continues, it may deprive it of the big part of its economic, infrastructural and demographic potential, putting Ukrainian President Volodymyr Zelensky before a ‘devil’s alternative’; is it better to be a complete winner with a devastated and depopulated country or choose to be a partial winner with a potential for growth? In other words, is it better to be bigger but poorer or smaller but richer? What is predominant for a future of Ukraine if you have to choose between the two: territory or people? Personally, I will not even try to pretend that I have any kind of answer to this dilemma.

For all those reasons, the enthusiasm accompanying Ukrainian armoured carriers entering the streets of Kherson and being covered by flowers tossed by the visibly happy crowd of inhabitants may very quickly subside to the gloomy deliberation reflecting on the fact that although tactically the winner, Ukraine still has a lot of difficult strategic decisions to make on the tactical and operational levels, and the fact that the human and economic aspect of this war will have as much influence on its future as the military one. In the moments of winning the war, Kiev has good reasons to think about how not to lose the peace.