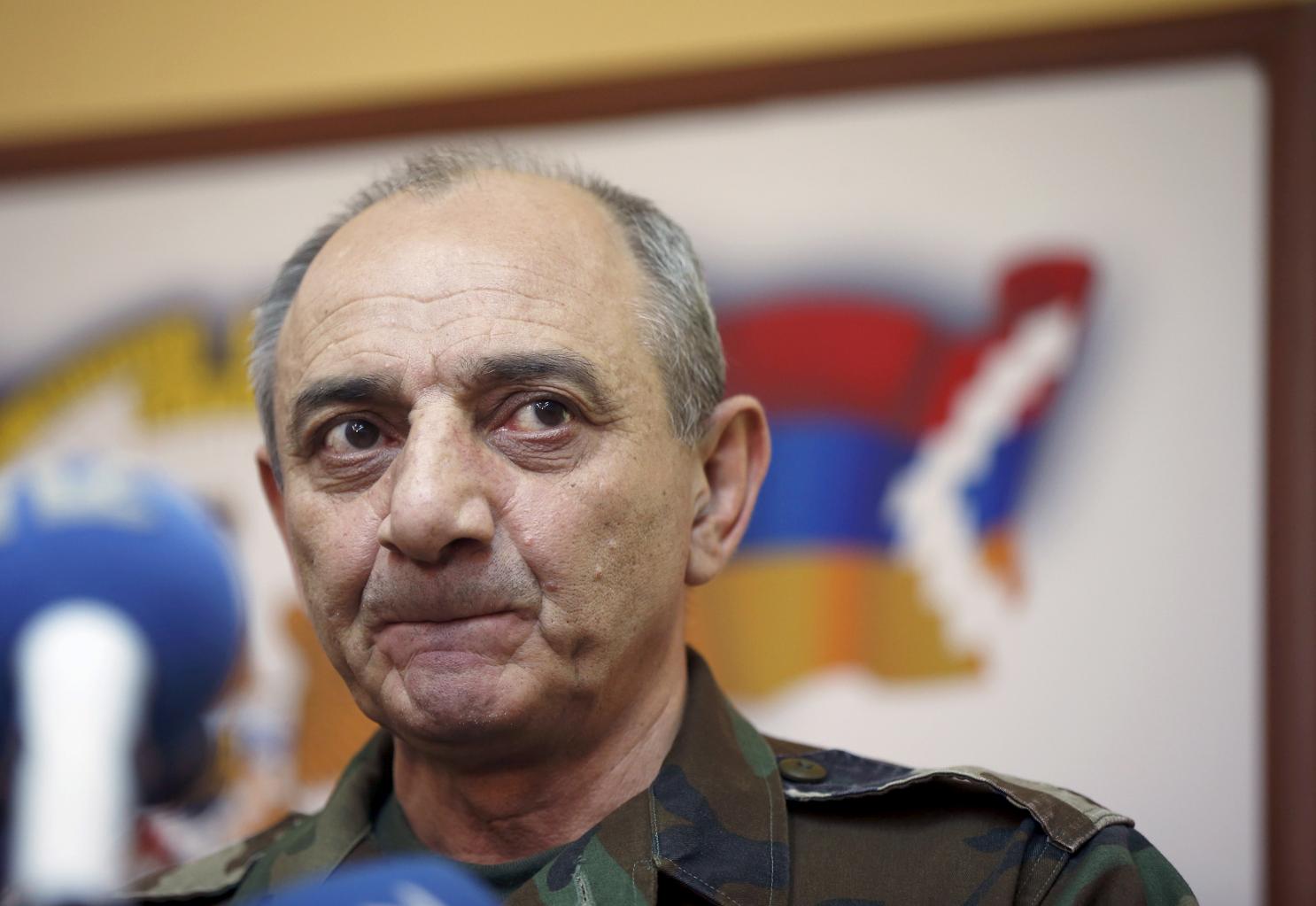 National Security Advisor John Bolton visited the South Caucasus region in October 2018 with an agenda that also included the facilitation of the peace process between Azerbaijan and Armenia. He raised several important issuesabout regional security and expressed his hope for the future. Then, Bolton suggested that the Armenian leader’s victory in the upcoming snap parliamentary elections would be a good opportunity for the government in Yerevan to take “decisive action” on resolving the Karabakh conflict. In response, the prime minister of Armenia, Nikol Pashinyan, blasted the U.S. official’s suggestion, stating that “Bolton, or anyone for that matter, cannot speak on my (Pashinyan’s) behalf.”

Bolton’s message implied that the U.S. government expected and hoped that the new government of Armenia would take more responsible, courageous steps toward resolvingthe Armenian-Azerbaijan Nagorno-Karabakh conflict, which has drained the South Caucasus’ potential for prosperous development and stability over the past three decades. Bolton also made clear that there would be a very little room for the new Armenian government to maintain independent foreign policy, or to maneuver and balance in restricted regional geopolitics, unless the conflict is resolved. Former U.S. ambassador to Armenia Richard Mills suggested before leaving his post that “the harsh reality is that any settlement is going to require the return of some portion of the occupied territories.” He also told the new Armenian government that as long as the issue remained unsolved, there would always be “a special relationship with Russia,” which was cemented in the early 1990s when the decision was made to engage in a military approach to Nagorno-Karabakh.

Mills also noted that “the status quo is no longer in Armenia’s favor—from closed borders to the strain on the country’s material and human resources to corruption risks associated with the conflict. “Corruption didn’t grow because there are evil people here, the ground was pretty fertile for it because you have closed borders and a very small economy, so it’s very easy to control markets.” Acting Prime Minister Pashinyan blasted the comments of the U.S. ambassador, too. In response to these suggestions, Pashinyan, during his visit to Iran, took a selfie with a poster that said “no inch of land” when he met with Armenian community of Iran. The negative reaction to the National Security Advisor’s suggestions were covered by Armenian and Russian media outlets, which heavily publicized news stories about an alleged “Bolton plan for Nagorno-Karabakh” that claimed Washington was increasing its pressure on Yerevan regarding Karabakh in order to obtain support from Baku against Tehran.

An entity that was created in the occupied territories of Azerbaijan, to which Armenia refers as “Nagorno-Karabakh Republic” or “Artsakh Republic,” is just one of the gray zones in Eastern Europe, according to all international documents. The elite of Armenia and the established regime in the occupied territories have been desperately seeking all possible leverages and platforms for recognition and legalization of “Nagorno-Karabakh” or “Artsakh Republic.” These efforts include “diplomatic relations” with other unrecognized states. In May 2019, the foreign minister of Artsakh, Masis Mayilyan, did not conceal his plans to build relations with the self-proclaimed separatist Donetsk and Lugansk People’s Republics in the Eastern Ukraine is to get recognition of Russia. Nagorno-Karabakh’s relationship with two separatist regions of Georgia—and especially activities of Armenians in Abkhazia—have also irritated Tbilisi in the past. All this pushed Georgian president Salome Zourabichvili to voice her dissatisfaction during her recent official visit to Armenia. She said that the visits of representatives from Nagorno-Karabakh to South Ossetia and Abkhazia were a sign of malevolence toward Georgia.

Yerevan’s relationship with the occupied territories of Azerbaijan and Armenia touts the Nagorno-Karabakh Republic as an equal third party. The relationship has always been complicated and murky. On the one hand, Armenia claims it is independent entity, on the other hand, even Yerevan does not recognize it as an independent state. On top of that, the elites of Armenia and Nagorno-Karabakh have become so integrated in recent decades that it is almost impossible to divide them.

The two previous presidents of Armenia originally hailed from Nagorno-Karabakh and started their political career in the war against Azerbaijan outside the internationally recognized boundaries of Armenia. Back in the 1990s, the first president of Armenia, Levon Ter-Petrossian, brought in top officials from Nagorno-Karabakh to serve in his government. This group eventually forced the first president to resign when he warned his people of their intentions in 1998 and openly called for compromises and peace. In the wake of the resignation, the group held its grip on power until 2018, which is when Pashinyan came to power as a result of massive protests. The first president understood there would not be any economic progress and democratic development of Armenia without a conflict resolution with Azerbaijan.

All attempts to change the format of negotiations or to tout the regime in Nagorno-Karabakh as an independent party are nothing more than a waste of time, the manipulation of legal and historical facts on the ground, and a distraction from substantial negotiations. Additionally, the recent op-ed written by Masis Mayilian and his statements on other platforms present inaccurate narratives and are part of this strategy. By claiming that Azerbaijan has violated four UN Security Council Resolutions (822, 853, 874 and 884), Mayilian has distorted and manipulated the open and explicit texts of documents that support the sovereignty and territorial integrity of Azerbaijan unequivocally, and which demand the immediate, complete and unconditional withdrawal of occupying forces from all occupied regions of the Republic of Azerbaijan.

During the recent escalation between two groups, on May 20, at the meeting on the problems of the judicial system, Prime Minister Pashinyan accused representatives of the former regime of trying to use their connections in Karabakh to spread false information about the government and the prime minister of Armenia. He sees this as an effort to provoke military actions, surrender the territories, and shift the responsibility on the Armenian government. He considers this to be an act of treason and will undertake tough methods to eradicate such efforts. The Armenian prime minister’s statement contradicts previous statements he has made about how he cannot speak on behalf of Armenians of Nagorno-Karabakh while at the same time declaring himself as the guarantor of Artsakh’s security.

To this day, Prime Minister Pashinyan refrains from taking any action or making concessions that could hinder his political future. It appears that this perilous period of power transition in the country is obstructing possible negotiations and leaning toward the old dilatory and deflective tactics of Kocharyan/Sargsyan period, which “successfully” prolonged conflict resolution for more than twenty-five years following the 1994 ceasefire. Over the past few months, instead of moving forward with existing format and reinvigorating peace efforts, Prime Minister Pashinyan has repeatedly insisted that the negotiations format be changed so that Karabakh Armenians can officially have a say in them.

It should be noted that ahead of the Vienna meeting in March 2019, the OSCE Minsk Group released a statement rejecting the Armenian prime minister’s proposal and depicting it as a “continuous and direct dialogue [exclusively] between Baku and Yerevan conducted under the auspices of the Co-Chairs remains an essential element in building confidence and advancing the peace process.” In fact, this power problem goes back to the December 1989 decision of the Supreme Council of the Armenian Soviet Socialist Republic (SSR) on illegal “unification” (Miatsum—in Armenian) of Nagorno-Karabakh Autonomous Oblast (of Azerbaijan SSR) and Armenian SSR. It was further addressed on August 23, 1990, in the preamble of the Declaration on Independence of Armenia; the annexation decision of December 1, 1989, on “the unification of Armenia and Nagorno-Karabakh” was confirmed as one of the key principles of Armenian statehood. Thus, the principles of the Declaration on the Independence of Armenia once again were affirmed in the preamble of the Constitution of the Republic of Armenia on July 5, 1995.

In other words, the right of self-determination was not initial appeal of Armenia, it was initially attempt of annexation of the part of territories of Azerbaijan (Miatsum). Later realizing that annexation might create problems for Armenia internationally, they opted for more attractive paradigm of self-determination for international audience and in order to avoid easy labeling as an occupant.

Unfortunately, Armenians are now trapped between two conflicting paradigms—both in international affairs and domestic legislature. And although Armenia has been consistently trying to present Nagorno-Karabakh as an independent entity, Armenian officials have often referred to the annexation decision when dealing with domestic affairs. So, before touting Nagorno-Karabakh as an independent party on par with Azerbaijan and Armenia, Armenia should officially amend all legislature to reflect that it no longer abides by the annexation decision. This may be the only way to put an end to all legal disputes.

Additionally, according to the Armenian Constitution, there is ten-year residence and citizenship requirement. Robert Kocharyan did not meet this requirement since he was not born in the Republic of Armenia and did not apply to become a citizen. During the 2003 presidential election campaigns in Armenia, the court declined the case of six opposition candidates who demanded that it nullify the passport of Robert Kocharyan since he was not a true resident. The opposition candidates also pointed out that both the Constitution of Armenia and Nagorno-Karabakh prohibit dual citizenship. They noted that Robert Kocharyan was legally considered an Azerbaijani citizen, and therefore he could not be a president of Armenia.

At any rate, all eyes and expectations are on Pashinyan. Will he save his nation and rescue the country from the edge of an imminent precipice? Or will he be a disappointment and allow the country to depopulate and die slowly. Obviously, time, as Ambassador Richard Mills noted, is not on the side of the Armenian statehood and people. Azerbaijan has restricted Armenia’s access to all regional energy and transit projects and infrastructures. Additionally, 83 percent of landlocked Armenia’s borders have remained closed for more than twenty years, which has had a devastating effect on the economic and demographic potential of Armenia. Azerbaijan will likely continue this policy until vested parties engage in substantive negotiations.

The one thing that must be made clear to everyone is that so long as there is no resolution about the fate of Nagorno-Karabakh, then there will not be any way for Armenia to be a fully democratic country or achieve any economic progress. Neither the best reform practices nor the greatest Armenian lobby would not be able to help the country. Thus, the Armenian government and Trump administration must push for substantive negotiations and an urgent resolution to the conflict. All parties involved should consider UN Security Council Resolutions as well as international law and territorial integrity issues in the broader region.

Fuad Chiragov is a researcher affiliated with a Baku based independent think tank Center for Analysis of International Relations.