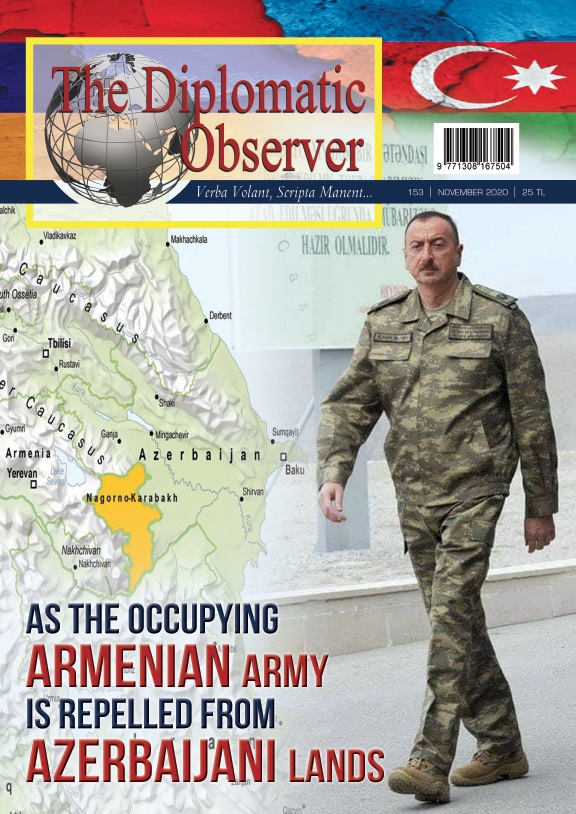 In the article titled “One Hundred Years of Relations between Turkey and Armenia” published in the April 2020 issue of “Diplomatic Observer”, I looked into the hundred years of relations between the two states that started with the Gyumri Treaty that was signed on 3 December 1920. My conclusion indicated that these relations unfortunately were far from the point of reconciliation and normalization. With the developments of the past six months, the relations between the two states have deteriorated to an unprecedented extent, way beyond my pessimistic predictions. On 27 September, the fighting that started in Nagorno-Karabakh[1] turned into a war between Azerbaijan and Armenia. Turkey’s full support for Azerbaijan’s territorial integrity and recuperation of its lands under occupation made Turkey the main target for Armenia. In fact, the narrative of the Armenian government and official declarations has designated Turkey as the main party that Armenia was countering.

Its location in the Southern Caucasus, a key region which constitutes one of the crossroads of an evolving Eurasia, has provided Armenia with additional trump cards not only to sustain but to further invoke the traditional support it has been receiving from Russia and the Christian world in general. The Eurasian developments of global impact, which has brought the region into limelight, has also given Armenia an opportunity to widen its relations, apart from Russia to whom it is dependent in multifaceted ways, with actors such as the European Union, the US, and China. In such a setting, it appears that the political calculations of the new administration of Armenia has come to the conclusion that as things stand in the global conjecture, adversity to Turkey would yield more harvest than cooperation with Turkey.

The adversity towards Turkey and Turks in Armenia, where until a short while ago effort was made to keep it within reasonable limits, has quickly escalated in the recent period and turned into animosity that is no longer being hidden. It is possible to say that an important threshold was crossed in this development with the adoption of pro-Armenian resolutions in both wings of the US Congress, initiated by the militant Armenian lobby in the US and aided by like-minded others. Although the statement published by the US President on 24 April on the occasion of the Remembrance Day for Armenians did not cross the traditional line, the President, Prime Minister and Foreign Minister of Armenia had enough ammunition to exalt their narrative and express their resolve to exploit the issue.

Here below are some concrete examples of Armenia’s hostile and provocative attitude and activities towards Turkey in the last six months. A trilateral front was established with Greece and the Greek Cypriot Administration of Southern Cyprus (GCASC) with the aim of forming a coalition against Turkey. Armenia shined with its excessive and hostile pronouncements against Turkey in this front. The front made a ridiculous but failed attempt to obstruct the Turkish diplomat who was nominated for the UN General Assembly presidency[2]. The commemoration and statements by highest level Armenian authorities made on the hundredth anniversary of the obsolete Sèvres treaty as well as the reiterated “pipe dream” demands[3] were also welcomed by the trilateral front.

This policy of Armenia’s new government against Turkey can be seen as the hopeless effort of the administration of Prime Minister Nikol Pashinyan to cling to power. This administration came to power with the promise of carrying out democratic reforms and introduce Armenia to modern values. However, in a short span of time, disappointing failures and incompetence emerged. Hence, the administration resorted to playing the nationalism card, pinned the blame on foreign enemies and took the easy way out by showing aggression to Azerbaijan and highlighting Turcophobia. In particular, two ministers in the administration, the Defense and the Foreign Affairs have played a major role to this end.

The first signal was given at the Azerbaijan-Armenia border with the skirmishes on 12-13 July in the Tovuz region, near the Georgian border, overlooking the strategic passage of pipelines and routes of transportation[4]. Turkey, which closely follows Armenia’s hostile policy targeting the region’s stability, issued a statement condemning Armenia’s aggression. This staunch support of Turkey to Azerbaijan led to a duel of words which clearly demonstrated Turkey’s discontent with Armenia’s policies.

The fighting which turned into war in Nagorno-Karabakh on 27 September left Armenia, which did not receive the support it was expecting and provoking for, in a difficult situation bringing it to the brink of disaster. The reason behind the weak support for Armenia and its supporters showing no more than verbal, moral encouragement was even more devastating for Armenia. Armenia was clearly reminded that this war was not against Armenia, but a struggle to recover Azerbaijan’s lands under occupation. It was also reminded that an intervention in favor of Armenia would mean supporting illegality, the violation of international law, and the defying of the resolutions of the UN Security Council and General Assembly.

Turkey became the most prominent country in this respect, as she left no place for doubt regarding her unfailing, staunch support for Azerbaijan. This course of events, Armenia not being able to force its presence against Azerbaijan, the inevitable reaction against the deceptive image of Armenia’s diplomatic and military prowess embedded in the public opinion and its repercussions in the domestic politics has caused visible panic in the Armenian administration. For a passable excuse and a way out, the administration further harped on the discourse that Turkey was the real enemy. This claim and arguments are based on three pillars:

One of them is the claim that Turkey has sent jihadist elements from Syria to fight on Azerbaijan’s side. Turkey and Azerbaijan have assuredly refuted this claim without delay. Azerbaijan reminded that she has enough soldiers. It was also emphasized that such dispatching could not remain secret and could be concretely verified as it concerns the border crossings with third countries. While it is clear that this claim was a lie, it was nevertheless widely aired in the media of countries with pro-Armenian sentiments, a blatant use and display of fake news, which also showed who stood where. On the other hand, this propaganda campaign was a suitable diversion tactic for Armenia to conceal the illegal foreign elements it brought to the front.

Secondly, Armenia has once again pulled out its trump card of Christian solidarity, a habit it resorts to every time it is in a tough situation. The photograph of an Armenian Apostolic (Orthodox) priest carrying an assault rifle has called for co-religionists to join the struggle[5]. The war was presented as the struggle of the Christians against the Muslims and as a life-or-death struggle of the Christian people. Armenia was presented as the line of defense against Turkish expansion up to Vienna. Meanwhile the assertion that churches were being deliberately and intentionally destroyed was not omitted.

Lastly, not surprisingly, the genocide narrative, and accusations and claims tied to this narrative were voiced extensively. It was audaciously asserted that the real aim behind this war and Turkey’s support was to subject the Armenian people to genocide.

These developments show Turkey once again that Armenia is able to maintain a propaganda campaign justifying itself and to find supporters especially in the Western-Christian world despite its occupation of Azerbaijan lands that is obviously illegal and dismissive of international law. On the other hand, Turkey’s support for rights of Azerbaijan and rule of law can be sidelined and distorted with suspicions for groundless objectives and aims.

Turkey and Turkish diplomacy have historical depth and profound experience, an accumulation of knowledge and wisdom to be able to understand the inherent differences and common denominators of the region and the long-term interests of the region beyond the current conflicts. The proposals of the "Caucasus Stability Pact" and "Caucasus Stability and Cooperation Platform" that Turkey has introduced in the recent past are reflections of the awareness that the future of the region is bound to have peace, stability, cooperation, and good neighborly relations between the countries of the region. Today, the same belief and forecast uphold their validity despite all the controversies and impediments stated above.