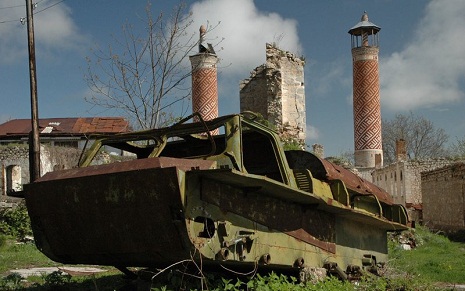 There are several crucial issues that are overlooked when the Karabakh conflict is discussed. But these issues are likely to be brought to the agenda during the conflict resolution process. The report “Illegal Economic and Other Activities in the Occupied Territories of Azerbaijan,” which was presented to the U.N. Security Council by Azerbaijan on Aug. 16 brings up several of these issues. This detailed report, based on the data gathered from more than 500 press reports released by the Armenian press and official sources between the years 2010-2015, is an important document that discloses Armenia’s illegal activities in the occupied territories of Azerbaijan. These include illegal settlement policies, destruction or appropriation of historical and cultural heritage, exploitation of natural resources, illegal trade and economic activities, and violation of private and public property.

Armenia, either directly or via the de facto Armenian administration in Karabakh, has continued its illegal activities in the occupied territories of Azerbaijan with increasing frequency since the 1990s. As mentioned in the report, Armenia-registered companies, as well as foreign businesses, both finance and benefit from these illegal activities. These acts of the Armenian and foreign actors are violations of the “law of occupation” and “international humanitarian law.”

Since the beginning of clashes in 1988, Armenia has carried out a policy of “Armenianization” of the region. As part of this policy, especially since 2010, it has undertaken efforts to settle ethnic Armenians in occupied Azerbaijani territories to gain leverage in future peace talks. The OSCE, in its reports published in 2005 and 2010, confirmed these illegal attempts. The other leg of the “Armenianization” policy is the documented destruction of the Azerbaijani cultural and historical heritage.

These policies are violations of the relevant sections of the 1949 Geneva and 1954 Hague Conventions.

Furthermore, archeological excavations in these territories and the exhibition of historical artefacts in museums in Armenia are also breaches of international conventions such as the 1954 Hague Convention and the 1970 UNESCO Convention.

Strikingly, third-country foreign companies are also involved in such activities via Armenia-registered front companies, thus gaining economic profit from the occupation. Among these are companies registered in the U.S., Germany, France, the Netherlands, Russia and Greek Cyprus. Whether the stances of these countries on the Karabakh conflict are influenced by the economic benefits their companies enjoy in the occupied territories is a curious question.

Notably, the true ownership of a number of these companies is unclear due to their secretive activities. This situation, when the world is haunted by global terrorism, points to larger security issues as a result of the occupation of Azerbaijani territories.

To sum up, Armenia’s economic activities and other activities that aim to change the cultural, demographic and physical structure of the occupied territories of Azerbaijan are criminal acts in terms of the “law of occupation” and “international humanitarian law” as defined in international conventions. In order to achieve a just resolution in the Karabakh conflict, real and corporate entities that commit or are involved in these acts will have to face the legal consequences of their acts. Alas, this aspect of the Karabakh conflict is usually overlooked by experts and the international community.

* Turgut Kerem Tuncel is a Senior Analyst at the Center for Eurasian Studies (Ankara).