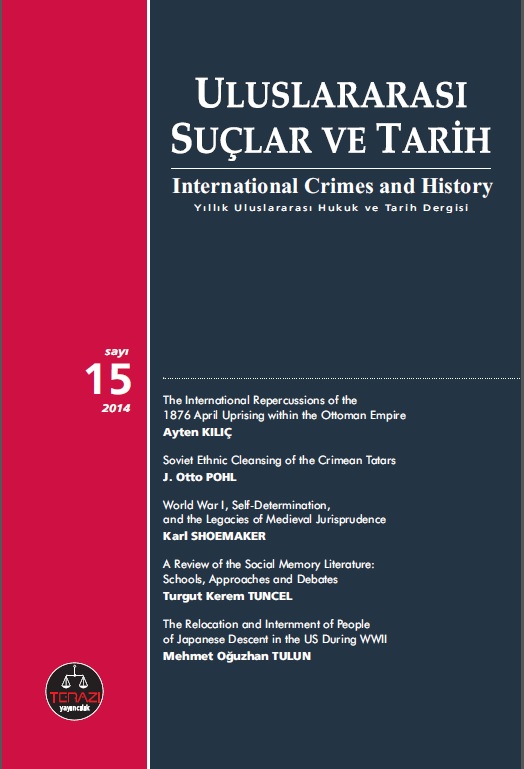 International Crimes and History Journal completes nine years of its presence with this current issue. As it was remarked at the first issue, the research area of the journal is the massacres and atrocities that have occurred in the history, and the scientific investigation of these, especially on the Balkan, the Caucasus and the Middle East countries which constitute the Ottoman geography. All these events are defined as ‘international crimes’ according to theRome Statute dated July 17, 1998.

Our journal extended its area of research and interest by publishing articles not only about history, but also similar recent events occurring outside of the geography we mentioned above. Our journal stands as the only publication which examines international crimes as it had been for the last nine years. We wish this topic to be addressed extensively in our country and appear in other scientific
publications.

As we also mentioned in our previous issue, articles written in English increased in number as a result of English being a language of science. All articles, approved by our referees who examine the articles sent to
us to be published in this issue, are in English, despite being penned by Turkish native speakers. We publish these articles assuming that the people interested in international crimes, which is our journal’s area of
research, know English. We are determined to include articles in Turkish, or at least comprehensive abstracts, in our future issues.

The first of five articles in the current issue of our journal is entitled The International Repercussions of the 1876 April Uprising within the Ottoman Empire written by Ayten Kılıç. As the author states, despite being a failure, this uprising lead to the 1877-78 Ottoman-Russian War and prepared the collapse of the Ottoman Empire through large territorial losses in the Balkans.

Otto Pohl, in his article entitled Soviet Ethnic Cleansing of the Crimean Tatars, describes that the Crimean Tatars, charged of treason, were exiled to Uzbekistan and other regions, and worked under difficult conditions. He tells that tens of thousands of Crimean Tatars died and the survivors were allowed to return to their homelands only after 1989.

In his article entitled World War I, Self-Determination, and the Legacies of Medieval Jurisprudence, Karl Shoemaker indicates that nations’ right of self-determination dates back to the Middle Ages, but was reshaped in 19th and 20th centuries, and it had some effect especially on the Balkans under Ottoman rule during the 19th century and on the 1919 Versailles peace negotiations.

Turgut Kerem Tuncel, in his study entitled A Review of the Social Memory Literature: Schools, Approaches and Debates, addresses social memory on a theoretical level by tracing different schools and approaches, and debates among them.

In his article entitled The Relocation and Internment of People of Japanese Descent in the USA during WWII, Mehmet Oğuzhan Tulun analyzes a lesser known event in our country, the relocation and internment of the Japanese-Americans, despite being innocent, by the US Government during the Second World War, and compares it with the Armenian resettlement.

Dr. Ayten KILIÇ
Dr. Ayten Kılıç studied international relations at Middle East Technical University. She received a M. A. from Bilkent University’s Department of International Relations. Dr. Kılıç completed her doctoral studies in history at the University of Wisconsin-Madison in 2012. She is currently working on a book titled Paved with Good Intentions: The Road to the 1877-78 Russo-Ottoman War; Diplomacy and Great Power Ideology. Her research focuses on the Ottoman Empire, Russia, and the Balkans.
Contact: aytenk@hotmail.com

Assoc. Prof. J. Otto POHL
J. Otto Pohl is a Lecturer in the Department of History at the University of Ghana, where he teaches Modern European and World History. From 2007 to 2010, he served as an Associate Professor of International and Comparative Politics at American University of Central Asia in Bishkek. He earned a B.A. (1992) in history from Grinnell College and an M.A. (2002) and Ph.D. (2004) in history from the School of Oriental and African Studies, University of London. He is the author of two books; The Stalinist Penal System and Ethnic Cleansing in the USSR, 1937–1949. He has also written a number of shorter pieces on the subject of national deportations in the USSR.
Contact: j.ottopohl@gmail.com

Assoc. Prof. Karl SHOEMAKER
Karl Shoemaker is an Associate Professor of History and Law at the University of Wisconsin-Madison. He earned a Ph.D. from the University of California, Berkeley. He was also a member of the Institute for Advanced Studies, Princeton. Professor Shoemaker is an interdisciplinary legal scholar whose research focuses on medieval legal history. He has a strong interest in historical and philosophical developments in criminal law and punishment. He is the author of Sanctuary and Crime in the Middle Ages, 400-1500.
Contact: kbshoemaker@wisc.edu

Dr. Turgut Kerem TUNCEL
Turgut Kerem Tuncel is a specialist at the Center for Eurasian Studies (AVİM). He completed his undergraduate degree in 2001 at Middle East Technical University with a major in psychology and a minor in sociology. He holds a M.A. in political science from Bilkent University. Dr. Tuncel earned his Ph.D. degree in Sociology and Social Research from Università degli Studi di Trento in 2014. His research interests include diasporas, digital culture, social memory, society and politics in the Caucasus, Armenian diaspora, society and politics in Armenia, and Armenia-Turkey relations. Dr. Tuncel is the author of the book Armenian Diaspora: Diaspora, State and the Imagination of the Republic of Armenia.
Contact: tuncel@avim.org.tr

Mehmet Oğuzhan TULUN
Mehmet Oğuzhan Tulun is a specialist at the Center for Eurasian Studies (AVİM). He studied political science, international relations and history at McGill University. In 2012 he completed his M.A. on the European Union at Başkent University Institute of European Union and International Relations. He is currently a Ph.D. student at Ankara University Faculty of Political Science. International politics, history, and crimes, with a particular focus on the Balkans, Eastern Europe and the Caucasus are Mr. Tulun’s research interests.
Contact: motulun@avim.org.tr