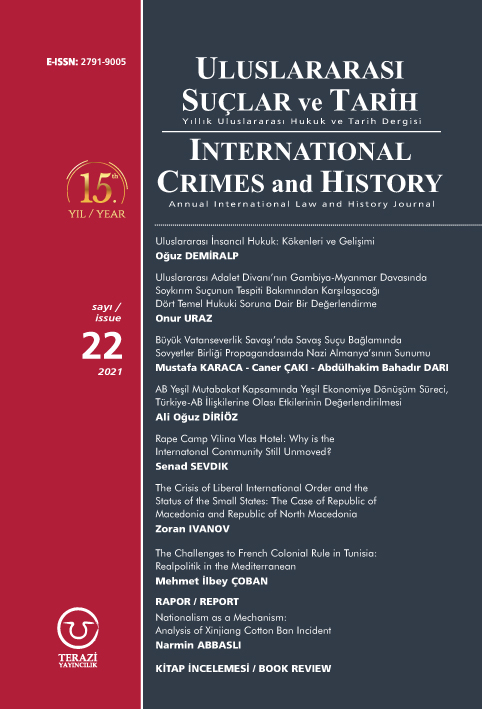 Uluslararası Suçlar ve Tarih / International Crimes and History (UST/ICH) has reached its 15th year of publication with its current 22nd issue. UST/ICH, in line with its rich publication heritage, has continued to expand its article types and topics in the current issue. In that regard, the 22nd issue of UST/ICH covers the fields of International Law, History, International Relations, and Sociology.

Ambassador (R) Gündüz Aktan, in his editorial published in the first issue of the UST/ICH,  had described the area of study of the UST/ICH as the massacres and atrocities that took place in history, and the international crimes mentioned in the Rome Statute of 17 July 1998. Following publication in this context for a long time, UST/ICH  decided two years ago to expand its research topics and thus new article sections were added to the journal. On this occasion, we commemorate with respect Ambassador (R) Aktan, who penned the first editorial of the journal and contributed greatly to its publication.

The COVID-19 pandemic continued to be at the top of the world agenda in 2021. In this challenging period, the whole world tried  to adapt to new conditions and changes. While changes with sociological, political and economic implications occur both internationally and nationally and the pandemic environment creates unusual difficulties, old troubles of the past such as separatist tendencies, racism, and problems created by the legacy of colonialism continue to remain on the agenda. The current issue of the journal gives the message that life continues as before in the pandemic environment and also emphasizes the importance of the uninterrupted continuation of the journal’s studies.

As part of the expansion of the subject areas, the 22nd issue of the UST/ICH consists of one commentary, five research articles, one “Cases Before International Courts” section article, one report, and one book review.

The article in the “The Cases Before International Courts” section titled “An Evaluation Of The Four Main Legal Problems That The International Court Of Justice Will Likely Face In Assessing The Crime Of Genocide In Gambiya – Myanmar Case” Onur Uraz examines four fundamental legal problems that the International Court of Justice (ICJ) will likely face in Gambia v. Myanmar case and analyses in detail whether the crime of genocide was committed against the Rohingya People of Myanmar. The article argues that the real challenge of the case is to establish whether these acts are committed with “genocidal intent” and, if so, whether Myanmar can be considered as the perpetrator as such.

The first research article by Mustafa Karaca, Caner Çakı, and Abdülhakim Bahadır Darı titled “The Presentation Of The Nazi Germany In The Soviet Union Propaganda In The Context Of The War Crime In Great Patriotic War” investigates the discourses that the Soviet Union used against Nazi Germany during the The Great Patriotic War and World War II. The article focuses especially on the messages that the USSR gave to its people about the Nazis for propaganda purposes.

The second research article titled “Transition Towards Green Economy Within EU Green Deal, The Evaluation Of Possible Impacts On Relations Between Turkey And The EU” by Ali Oğuz Diriöz deals with environmental problems in the face of natural disasters that have been experienced frequently in Turkey and in the world, especially in recent years. The article focuses on the relations with the European Union, without ignoring the critical importance of Turkey's adaptation to the Green Deal for future generations.

The third research article titled “Rape Camp Vilina Vlas Hotel: Why Is The Internatonal Community Still Unmoved?” by Senad Sevdik investigates the agonizing realities  regarding Vilina Vlas hotel in Visegrad city of Bosnia and Herzegovina, which is a building that was used as a camp for raping, torturing, beating, and killing innocent civilians, mostly Bosnian Muslim women. The article investigates the ethical issues surrounding the operation of this former camp as a touristic place and proposes solutions to this shameful situation.

The fifth research article titled “The Challenges To French Colonial Rule In Tunisia: Realpolitik In The Mediterranean” by Mehmet İlbey Çoban investigates the dynamics behind the impediments that French colonial rule faced in Tunisia in the context of International Relations discipline. The article explains the notion of anarchy and argues that this notion is helpful in explaining the dynamics of the region in which Tunisia situated.

In the Reports section, Narmin Abbaslı, in her article titled “Nationalism As A Mechanism: Analysis Of Xinjiang Cotton Ban Incident” investigates the aftermath of the sanctions imposed by Canada and the European Union on current and former Chinese officials and of the  increasing pressure on China for alleged abuses in China’s Xinjiang Uyghur Autonomous Region province. The study also analyses the government’s ability to manage nationalism and public opinion during the period of increased international pressure.

The book review by Ceylin Özyurt analyzes Rustam Atadjanov’s book titled “Humanness As A Protected Legal Interest Of Crimes Against Humanity: Conceptual And Normative Aspects”. Özyurt in her analysis draws attention to the point that the book describes the protective scope of one particular type of core crimes under international law and underlines that the explanations regarding this concept need to answer both conceptual and normative questions.

We hope you enjoy the journal and extend our best wishes for the coming year.

Mustafa Karaca was born in Kayseri. He completed his primary, secondary and high school education in Kayseri. He graduated from Faculty of Economics and Administrative Sciences, Department of Business Administration of Erciyes University (Kayseri/Turkey). He completed his master's degree in Business Administration and his doctorate in Management and Organization in the same university, respectively, by defending his thesis titled "Personality Traits Determining Entrepreneurship". He continued his academic life in Erciyes, Ahi Evran, İnönü and Sakarya Universities, respectively. He has been working as a faculty member at Faculty of Economics and Administrative Sciences of Anadolu University. During his career, he served as head of the department, member of the faculty board, Director of the ınstitute of social sciences, member of the senate and member of the university board of directors. He has published around 40 national/international articles, around 50 national/international papers, and around 10 national/international books in the fields of communication, management, propaganda and entrepreneurship. He received support from Tübitak with his article published in the Review of Managerial Science (SSCI) in 2019. In 2020, he was awarded the publication incentive of Anadolu University with his book titled Handbook of Leadership published by Cambridge Publishing House. He wrote and directed many projects funded by European Union Framework Programs, IPARD, Bilateral Cooperation Programs, Central Finance Contracting Unit, Development Agencies and Turkish National Agency. He attaches importance to interdisciplinary and multidisciplinary studies and studies in this direction. He is the founder and editor of Anadolu Academy Journal of Social Sciences and International Journal of Social Sciences.

Caner Çakı was born in 1989 in Bafra. He graduated from Department of Public Relations and Advertising of Communication Faculty of the Karadeniz Technical University (Trabzon/Turkey) in 2012. He completed his master’s in Department of Communication Sciences of Inonu University (Malatya/Turkey) in 2016. Then he completed his doctorate in the Department of Communication Sciences Faculty of Erciyes University (Kayseri/Turkey) in 2021. He has worked as a research assistant at Inonu University between 2015-2021. His interest areas are propaganda, political communication, social media and public relations. He has studies on the propaganda activities in Nazi Germany, the Soviet Union and the People's Republic of China. He published studies on propaganda activities in certain national and international journals. He is editor of three books titled "Propaganda and Communication", "Propaganda Music in Turkish Political Life" and "Propaganda Studies in Turkish Political Life".

Dr. Ali Oğuz Dirioz is an Assistant Professor of International Relations and Globalization at the Department of International Entrepreneurship at TOBB University of Economics and Technology (TOBB ETU). He is also an Adjunct Professor at the Department of Political Science and International Relations at TOBB ETU, and since 2020 Adjunct Prof. with the TOBB ETU Tashkent, Uzbekistan Branch. Prior to TOBB ETU, he was a lecturer at Bilkent University’s Department of International Relations.Dr. Dirioz was previously a consultant for the World Bank where he worked on the Status of Water Sector Regulation in The Middle East and North Africa (2017). Dr. Dirioz’s interests include globalization, international relations, diplomacy, energy and environment, Turkish politics, and the role of businesses as well as non-state actors in foreign policy. Recent publications include “Addressing climate change through the water–energy–food nexus; Lessons learned from Turkey” (2021), “The Prospects of Natural Gas Organization in the Light of Qatar’s OPEC Exit : Some Critical Reflections The Extractive Industries and Society” (2020), and “Watering Down Tensions: The Role of Securitisation in Water Cooperation” (2020). He is currently Vice President of the Association for International Economic Research and Studies (ECONFO), and is an affiliated academic with the Foreign Policy Institute (FPI). He is fluent in French, English and Turkish (native).

Senad Sevdik graduated from Sabancı University, Faculty of Arts and Social Sciences, Department of Economics in 2019. Following his undergraduate degree, he completed his master's program with a thesis on Bosnia and Herzegovina at the Department of International Relations at Groningen University in 2020. In 2018, he took courses in economics at the undergraduate level at Maastricht University as part of the Erasmus program. During his undergraduate education, he did an internship at the Istanbul Policy Center in January 2019 and contributed to the "Youth Work Local Cooperation in Turkey" project. He also completed another internship at the Foreign Policy Institute and wrote articles on the Balkans and the South Caucasus. Since the beginning of January 2021, he has been writing articles on the Balkans in the Center for Eurasian Studies.

Dr. Zoran Ivanov is an assistant professor at TOBB Economics and Technology University in Ankara. He graduated from Military Academy in Skopje, R. Macedonia. His education continued in Command and General Staff College, where he graduated with a Master’s of Military Arts and Science in security studies. In 2014 he got his Ph.D. from the Institute of National History in Balkan security studies. He served in the Macedonian Army from 1999 until 2019 on different positions and deployments. In 2010, he was transferred to work within the government in the defense and security field. He was in a leadership position for over 18 years, leading military and government large and midsize organizations through restructuring and reorganizations in the field of security and intelligence. His primary expertise is terrorism, hybrid warfare, security, leading changes, and national security policy. In parallel, he was visiting lecturer and keynote speaker in a few domestic and foreign Universities and other international schools and centers. Dr. Ivanov has numerous publications and is co-author of many articles in many professional Journals and Magazines.

Narmin Abbasli is a second-year master’s degree student at Fudan University in China. Her major is International Politics with a focus on Chinese Politics and Diplomacy. Her main research interests include modern political developments in Chinese domestic politics and foreign relations. She is currently conducting research on Sino-Russia relations.

Ceylin Özyurt graduated from Middle East Technical University with a major of Sociology and was the student grading first of the Sociology Class '17. Following her graduation, she graduated from MSc Sociology Program of the same university on September, 2021 with her thesis focusing on normalcy, stigma and disability. During her graduate education, Özyurt contributed as a researcher to projects on gender, violence against women, migration, disability and social protection mechanisms regarding impoverished populations. She continues her graduate education as a Ph.D. student at METU Sociology as of October, 2021 and has been working at Social Sciences University of Ankara as of February, 2021.