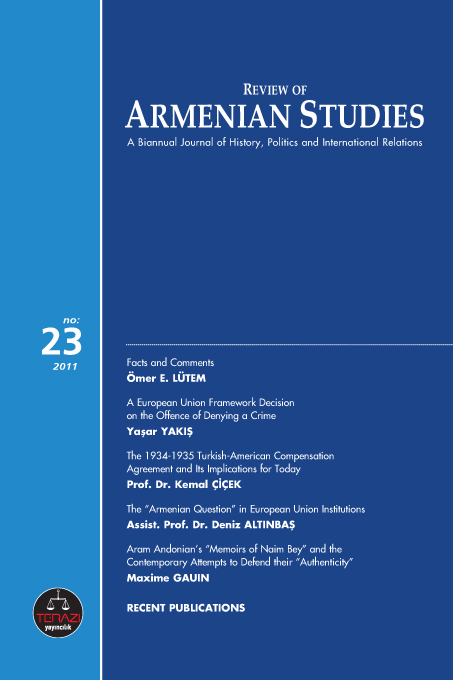 Turkey-Armenia relations continue to be frozen and even became worse when President Sarkisian suggested that it’s up to the younger generation to make efforts that Western Armenia (Eastern Turkey) to join with Armenia. Words that Prime Minister Erdoğan found provocative and does not suit to a statesman. Facts and Comments, the first article of this issue also deals -other than Turkey-Armenia relations- with the French Senate finding unconstitutional a draft law penalizing those who don’t believe that an Armenian genocide took place, draft resolutions against Turkey submitted to U.S. Congress by the supporters of Greek and Armenian interests and the commemorations events in Armenia and in Turkey of the 24th of April as well as the statement of President Obama concerning this day.

Prof. Dr. Kemal Çiçek in his Article titled “The 1934-1935 Turkish-American Compensation Agreement and Its Implications for Today” explains that the two countries have in thirties settled the question of compensation to be paid for the properties that the American citizens left in Turkey. This agreement should and would be the main evidence for the pending compensation cases that the Armenians filed in California.

Turkish former Foreign Minister Ambassador Yaşar Yakış in his article “A European Union Framework Decision On The Offence Of Denying A Crime” taking into consideration that the EU Framework Decision on Combating Certain Forms and Expressions of Racism and Xenophobia, the competence on that matter is entrusted to the national courts of the EU Member States, instead of international criminal courts, focuses on the discussion of whether the authorities designated by the Framework Decision are appropriate and competent for this specific task. These questions being particularly important as the crimes of the denials include also genocide.

Assist. Prof. Dr. Deniz Altınbaş in her article “The ‘Armenian Question’ In European Union Institutions” analyses EU institutions and its major members’ approach to the “Armenian Question” and especially to the genocide allegations by addressing the European Parliaments resolutions, discussions and statements in the Parliament, the approach of some European politicians and reports of the EU institutions on that subject. The article also studies the stance of some countries and political groups which have supported Armenian theses.

Up to early eighties the main “documents” that the proponents of the Armenian genocide thesis were based on was the telegrams attributed to Talat Pasha who supposedly gave orders to kill the Armenians. These telegrams were published in a 1920 book by Aram Andonian titled shortly as “The Memoirs of Naim Bey.” In 1983 two Turkish scholars, Şinasi Orel and Süreyya Yüce proved beyond doubt that these telegrams are fake. Afterwards in Armenian genocide literature references to Andonian book diminished without disappearing completely and at the same time some attempts are made in order to prove that these documents are almost certainly authentic. Maxime Gauin, in his article entitled “Forgeries vs. Historical Research”, analyses for the first time in Turkey those attempts in detail by referring mainly to the works of Vakhan Dadrian and Ives Ternon. Needless to say, these efforts to “save” the Andonian documents are in vain and the telegrams attributed to Talat Pasha are unmistakably fake.