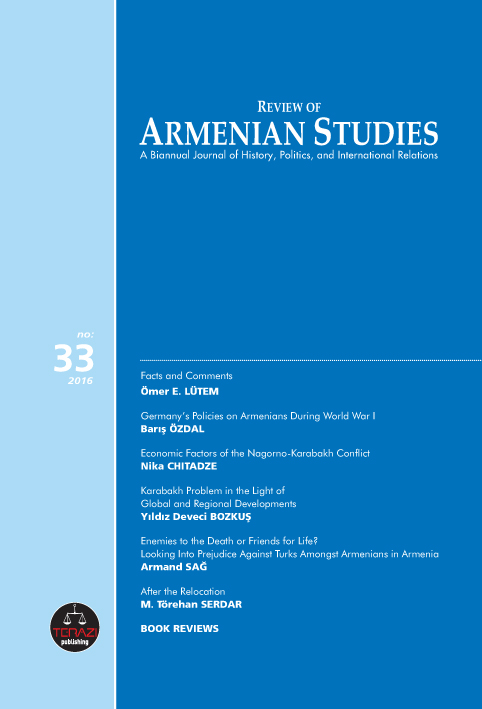 We are starting the 33rd issue of our journal with “Facts and Comments”, which analyzes Turkish-Armenian relations and some countries stances regarding the genocide allegations in the first half of the 2016. While there a state of (what can be called) negative calm in Turkish-Armenian relations, there were efforts to continue some ceremonies and activities related to the centenary of the Armenian relocation in 2016 as well. Meanwhile, the German Federal Assembly’s adoption of a resolution recognizing the genocide allegations created a serious problem between Turkey and Germany, and Pope Francis’ unnecessary reference to the genocide allegations during his visit to Armenia delayed the normalization in the Vatican-Turkey relations. Unlike this, however, the French National Assembly’s adoption of the bill penalizing war crimes, crimes against humanity and the crime of genocide at the least, so far, not created problems between France and Turkey, since the bill does not contain statements about the “Armenian genocide” and is yet to be approved by the French Senate. Although the downing of a Russian warplane very much negatively affected Russia and Turkey’s relations, however, this matter did not change Russia’s stance towards the Armenian genocide allegations.

The German Empire’s stance on the Armenian relocation and resettlement during World War I has been an attention-grabbing matter for a very long time. While some put forth that the relocation and resettlement was suggested to the Ottoman government by Germany, others criticize the German government of not having prevented the Armenian relocation. As a matter of fact, the resolution adopted by the German Federal Assembly mentioned above contains this matter as well. Although this matter is being brought up more and more to the agenda, it is seen that this matter is not being analyzed sufficiently. In this respect, the article titled “German Policies on Armenians During World War I” by Barış Özdal is being published in a timely manner.

Nika Chitadze, in his article titled “Economic Factors of the Nagorno-Karabakh Conflict”, touches upon an aspect of the Karabakh conflict that is not discussed much; the economic aspect. The author indicates that the Karabakh conflict is one of the main reasons for the instability in the Caucasus.

In the article titled “Enemies to the death or friends for life? Looking into Proejudice Against Turks Amongst Armenians in Armenia”, Armand Sağ tries to explain how Armenia sees itself in relation to Turks and Turkey, and also in this regard, addresses a possible Turkish-Armenian conciliation and Turkish-Armenian relations.

100th anniversary of the relocation has resulted in many publications being made in Armenia and the Diaspora. On the other hand, publications regarding this anniversary in Turkey are low in number and it is hard to say that there is a publication that has shined out and earned the appreciation of everyone. Published in 2015, the book titled Turks and Armenians: Nationalism and Conflict in the Ottoman Empire by Justin McCarthy has filled this gap. McCarthy explicitly explains his ideas on the historical development of the Armenian issue and how to interpret this development. His book is of such quality that; it would be enough for one to only read this book to scientifically learn what Armenian issue is about.

Such a book is as important for Turkish readers as it is non-Turkish readers, and for this reason, we believe that this book should be translated to Turkish as soon as possible. But due to the fact that this cannot happen immediately, the staff of AVIM, especially the director of the AVIM, (R) Ambassador Alev Kılıç, have prepared a summary of this book. We are publishing the English version of this summary on this issue of our journal. We have already published the Turkish version of this summary in the 52nd issue of our “Ermeni Araştırmaları” journal.

The second book analysis in this issue is about the book titled There Was and There Was Not by Armenian writer Meline Toumani that focuses on the attitude of Armenian Diaspora. The analysis of this book was prepared by Şakire Furtun.