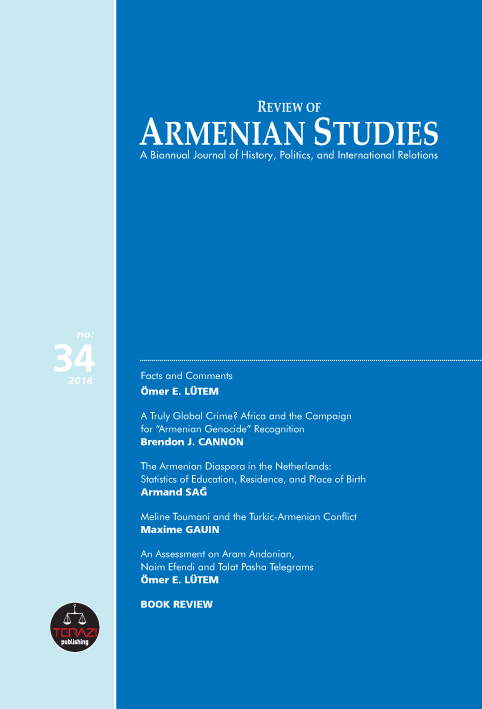 In the article titled “A Truly Global Crime? Africa and The Campaign For “Armenian Genocide” Recognition”, Brendon J. Cannon analyzes the campaigns carried out by Armenian groups for the 1915 events to be recognized as genocide, determines that Asia and especially Africa are ignored in these campaigns even though one would expect such campaigns to be carried out globally, and examines why Africa is ignored. The article also indicates that these campaigns carry anti-Turkish and anti-Muslim characteristics and reflect 19th century-style racist approaches.

Armand Sağ’s article titled “The Armenian Diaspora in the Netherlands: Statistics of Education, Residence, and Place of Birth” indicates Armenia’s and diaspora Armenians’ practice of the creation of the “other” and the formation of a defensive Armenian identity within the process of Armenian nation-building. As can be predicted, the “other” in Armenians’ identity formation is the Turk. Sağ also analyzes an interesting survey on the Armenian community living in the Netherlands that, among other things, reveals Armenians’ defensive identity formation against the Turks. According to Sağ, the survey reveals that Armenians of the Netherlands compare themselves not with the local Dutch people, but with the Turks living in that country.

Maxime Gauin, in his article titled “Meline Toumani and the Turkic-Armenian Conflict”, reveals that Meline Toumani’s book titled There Was and There Was Not: A Journey Through Hate and Possibility in Turkey, Armenia, and Beyond is constituted of unacademic information and interviews conducted with certain individuals, but that it is a special source of reference for the culture of hate developed by Armenians living in North America.

In 1920, Aram Andonian’s published a book titled The Memoirs of Naim Bey that he alleged to contain telegrams sent to certain governors that had Ottoman Minister of Interior Talat Bey’s (Pasha’s) orders to massacre Armenians. For many years, Andonian’s book was shown as the proof of the “Armenian genocide”. However, by publishing the book titled The Talat Pasha Telegrams: Historical Fact or Armenian Fiction? in 1983, the archivists Şinasi Orel and Süreyya Yüca demonstrated that the telegrams within Andonian’s book are fake. Afterwards, the reference made to Andonian’s book by writings and books on Armenian genocide allegations decreased greatly, and after a while, nearly disappeared altogether.

In his book titled Naim Efendi’nin Hatıratı ve Talat Paşa Telgrafları ve Krikor Gergeryan Arşivi (En. The Memoirs of Naim Efendi and Talat Pasha Telegrams) that he published in 2016, Taner Akçam attempts to prove that the “Andonian documents” are in fact authentic. The article titled “An Assessment on Aram Andonian, Naim Efendi And Talat Pasha Telegrams” reveals in a detailed manner that Akçam’s assertions are based on distortions and are thus invalid.

What is the purpose of putting in the effort to prove the authenticity of so-called documents that are clearly fake? It appears that there is a need to boost Armenian genocide allegations’ public standing, badly damaged due to the European Court of Human Rights’ (ECtHR) Bosnia-Herzegovina and Doğu Perinçek rulings, by introducing to the public some official-looking documents. It can be understood that this was the purpose of publishing Akçam’s book that attempts to prove the authenticity of documents that are in fact fake.

Lastly, the 34th issue of journal contains Osman Gün’s review of the book authored by Jordis Tezel Gorgas titled Le mouvement kurde de Turquie en exil: continuités et discontinuités du nationalisme kurde sous le mandat français en Syrie et au Liban (1925-1946) (En. The Kurdish Movement of Turkey in Exile: Continuities and Discontinuities in Kurdish Nationalism during the French Mandate in Syria and Lebanon (1925-1946)). This book explains the “Kurdish-Armenian Federation” that the Kurdish Hoybun Union and the Armenian Dashnak Party in Syria and Lebanon during the French Mandate tried establish in 1925-1946 against Turkey. It is known that extremist Kurdish nationalists and some Armenian groups who view Turkey as the common enemy are in an attempt today to establish an alliance and to move in unison against Turkey. Jordis Tejel Gorgas’ book carries importance in regards to it documenting the history of such efforts.