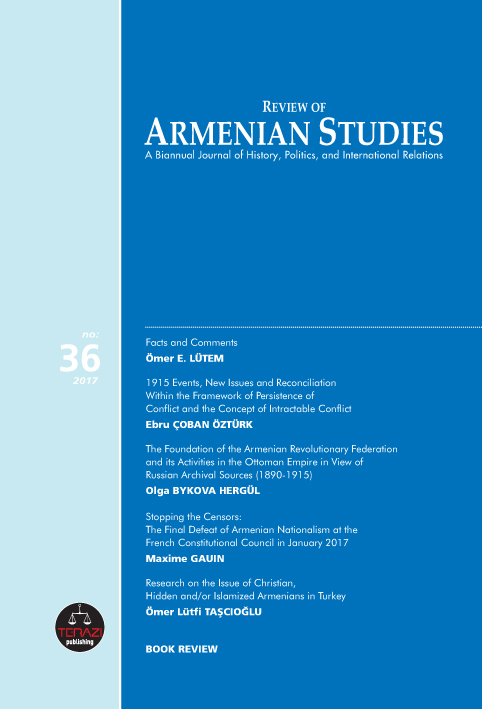 As always, the first article in the 36th issue of our journal is “Facts and Comments”. This article considers Turkish-Armenian relations and the developments regarding the 1915 events in the second half of 2017. Noteworthy developments in this period covered by the article include: the speeches delivered by President of Armenia Serzh Sargsyan in the 6th Pan-Armenian Armenia-Diaspora Conference and the UN General Assembly, Armenia’s initiation of a search for a new strategy for the recognition of its allegations regarding the 1915 events, Armenian Catholicosate of Cilicia’s (located in Lebanon/Antelias) demand from Turkey to receive a piece of real estate that it had abandoned and its subsequent application to the European Court of Human Rights regarding this issue, and Germany’s (which pursues a state policy in support of the Armenian genocide allegations) negotiation process with the Namibian government concerning the Herero and Nama genocide allegations.

The article titled “1915 Events, New Issues and Reconciliation within the Framework of Persistence of Conflict and the Concept of Intractable Conflict”, prepared by Ebru Çoban Öztürk, addresses the Turkish-Armenian controversy continuing for more than a century now in the framework of the concept of “intractable conflicts,” which points to a special category of conflict. In this respect, the author emphasizes the need for the analysis of the socio-psychological repertoire of the Turkish-Armenian controversy.

In the article titled “The Foundation of the Armenian Revolutionary Federation and Its Activities in the Ottoman Empire in View of Russian Archival Sources (1890-1915)”, Olga Bykova Hergül, using Russian archival material as a starting point, examines how the Armenian Revolutionary Federation (ARF - Dashnaktsutyun) began to develop itself after its foundation and how it came to differ from other Armenian organizations. Bykova states that a serious internal security problem emerged due to ARF’s reckless activities and that the people to suffer most damage from these activities were the Armenians, meaning ARF’s own kinsmen.

Maxime Gauin, in his article titled “Stopping the Censors: The Final Defeat of Armenian Nationalism at the French Constitutional Council in January 2017” explains the efforts of the Armenian diaspora in France to have the rejection of their genocide allegations outlawed, and how these efforts were affected by the decision of the Constitutional Council. According to Gauin, the decision taken by the Council on January 2017 has legally put an end to the diaspora’s efforts that been sustained for the last twenty three years. This new situation has, according to Gauin, created a new and positive environment for the discussion 1915 events.

In the 1970s and 1980s, a high number of Turkish diplomats, personnel, and their family members lost their lives as a result of the attacks carried out by Armenian terrorist organizations such as ASALA and the Justice Commandos, which all used the genocide allegations as a pretext for their attacks. These terrorist attacks have left deep scars in Turkish society. The extremeness of these attacks against Turkish targets have had effects beyond Turkish society, as well. For example, David Minier, the American prosecutor who took part in the trial of Gourgen Yanikian, who murdered the Turkish Consul General of Los Angeles Mehmet Baydar and Consul Bahadır Demir in 1973, wrote a novel inspired by the activities of Armenian terrorist organizations. Christopher Gunn evaluates Minier’s above-mentioned book titled The Ararat Illusion, and indicates some inferences can be drawn from such works regarding the Cold War and the terrorist organizations that were active during this period.