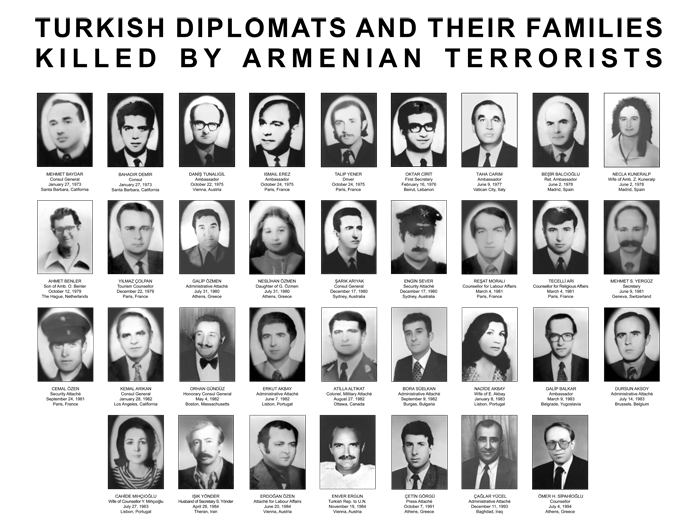 ATAA, On January 27, 1973, Armenian American extremist, Gourgen Yanikian, assassinated the Los Angeles Turkish Consul General Mehmet Baydar and Vice Consul Bahadir Demir, after inviting the Turkish diplomats to his hotel suite to present the Turkish Government with "gifts." The supposed gifts were a bank note and a painting stolen from the Ottoman Topkapi Palace. After greeting the diplomats, exchanging niceties, and offering tea, Yanikian left for his bedroom, retrieved his loaded weapon, entered the reception suite, and emptied nine rounds into the bodies of Messrs. Baydar and Demir. Yanikian shot two additional rounds into the heads of both men who already lay dead in a pool of blood.

Yanikian then put down his weapon, called the concierge, admitted to the killings, and waited for the police to come and arrest him. That day, Armenian papers published a letter from Yanikian urging Armenians to wage war on people of Turkish heritage.

Yanikian was tried in the Superior Court of the State of California for the County of Santa Barbara, convicted of first degree murder, and sentenced to life imprisonment on July 2, 1973. However, California's Armenian American Governor, George Deukmejian, ordered the release of Yanikian on parole on January 31, 1984. Please click here to read the trial transcripts.

The bodies of Messrs. Baydar and Demir were returned to Turkey for family funerals. Mr. Baydar left behind a widow and two daughters. Mr. Demir, who was newly married, was on his first foreign assignment.

Yanikian died soon after his release from prison. Hundreds of Armenian Americans attended the funeral of Yanikian. Many kissed his hands in the open coffin ceremony.

The Yanikian murders were the start of modern day Armenian terrorism by the Armenian terrorist organizations, Marxist ASALA and neo-fascist JCAG. To date, ASALA and JCAG, have carried out over 300 terror attacks, mostly bombings in public areas, and hate crimes against people of Turkish heritage. ASALA and JCAG have claimed responsibility for the deaths of more than 77 people, including Americans; woundings of over 700 people, mostly non-Turks; and billions of dollars of property damage worldwide. In the 1980s, Turkish and Israeli intelligence cooperated to uproot Armenian terrorists in Lebanon's Syrian-occupied Bekaa Valley.

The Assembly of Turkish American Associations (ATAA) is dedicated to seeking justice for victims of Armenian terrorism and hate crimes. ATAA submitted a Victims Impact Statement at the Criminal Sentencing Hearing of Mourad Topalian, former JCAG terror cell chief and former Chairman of the Armenian National Committee of America (ANCA). ATAA systematically appeared at the Parole Hearings of Hampig Sassounian, the sole remaining Armenian terrorist of the JCAG, who is serving a life sentence for the January 28, 1982 murder of Turkish Consul General Kemal Arikan. On June 29, 2018, as a result of tremendous efforts and campaigns by the Turkish American community and Turkish American organizations, the California Department of Corrections Parole Board denied Sassounian's release on parole. This was Sassounian's fifth parole denial in twelve years. Sassounian will not be eligible for parole suitability hearing until June 2021.