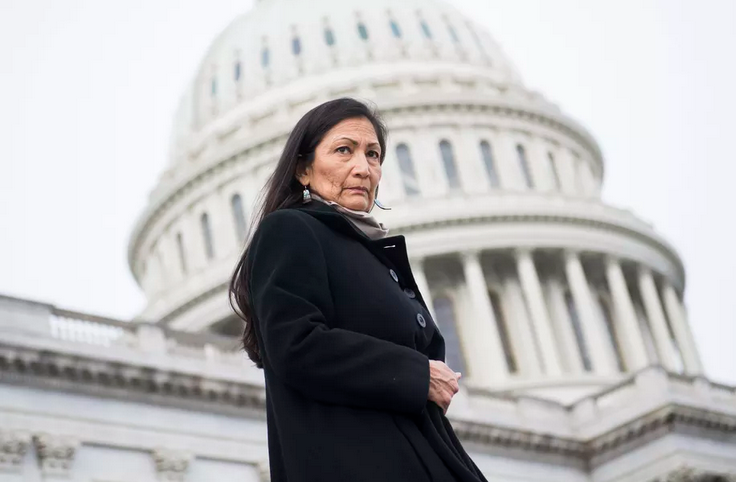 The new US President Joe Biden’s nomination of Deb Haaland, member of the House of Representatives as candidate to the Secretary of the Interior in the context of the efforts to form the new Cabinet received significant reactions. The reason behind this is the fact that Haaland is of Native American descent and for the first time in US political history, a woman is nominated as candidate to a federal post such as internal affairs, which is instrumental and influential on affairs regarding indigenous people.

The leaders of indigenous tribes, groups supporting the rights of Native Americans and many members of the Democratic Party greatly welcomed this candidacy, saying that “The American society will see the reality that a native people is also living in this country”. However, it is also being indicated that Haaland’s nomination to the Department of the Interior may negatively affect the highly critical majority that the Democratic Party holds in the US House of Representatives and may constitute an obstacle regarding Haaland’s candidacy.

Haaland is 60 years old and has been elected to the House of Representatives from the state of New Mexico situated in the mid-western region of the country. In case her candidacy is approved, Haaland will become the highest-level official for overseeing subjects such as the affairs regarding the officially recognized 600 indigenous tribes, state lands, water channels, wildlife, national parks, subterranean resources, all of which fall under the Department of the Interior’s area of responsibility.

As indicated in the article titled “A Human Tragedy: The Tragic Story of the North American Indians” published in the 21st issue of the International Crimes and History journal, the encounter of the European immigrants with the Native Americans represents a most striking period in the history of humanity, and with the events that followed, a most dramatic period. In the time from the American continent’s discovery by the Europeans in 1492 up to today, describing what the Native Americans have gone through is still a subject of debate today. The American people, when indigenous people are mentioned, on the scale of general public opinion, is observed to prefer remaining indifferent to the subject and displaying a reflex of wanting the past events to be forgotten.

The crucial point is the issue of whether the actions of the Europeans and European Americans targeting the indigenous people and the policies they implemented to the indigenous population causing its rapid decline after 1492 can be defined as genocide. The population of the indigenous people, which was 60 million in 1492 according to the most realistic estimates, dropped down to 270,000 by the end of the 19th century.

When the Native Americans, who are the original inhabitants of North America are the case, the term of genocide was not used until the mid-1970’s. Until events such as the occupations of Alcatraz Island in 1969 and the Wounded Knee in 1973, activists preferred to present to the US public opinion events inflicted on the Native Americans through terms such as massacres, unimplemented agreements, and racial discrimination. During this time, the genocide term was rarely used.[1]

An early use of the genocide term, in addition to the themes of sovereignty and unimplemented agreements, was included in the 1974 “Declaration of Continuing Independence” which was approved at the First International Indian Treaty Council meeting.[2]

Not long after, a few academics began using this term. Among them, Jack Norton, in his book titled “Genocide in Northwestern California: When Our worlds Cried” published in 1979, used the term in relation to some tribes being “annihilated as a people and as a culture” when considering the overall situation.

In 1992, which was the 500th anniversary of America’s discovery by Christopher Columbus, the case of Native Americans came high on the agenda.

Two books, David E. Stannard’s “American Holocaust: The Conquest of the New World”[3] and Ward Churchill’s “A Little Matter of Genocide: Holocaust and Denials in the Americas 1492 to Present” sparked much interest.

Haaland expressed that “climate change, tribal consultation and a green economic recovery” will be in the forefront of her priorities. These are aspects that will necessitate a very significant economic change after the period of former US President Donald Trump.[4]

Haaland stated her wish to increase the influence of the indigenous tribes in state politics and saving them from the marginality that they feel.

As part of the environment-friendly economy, Haaland has set a national objective of preserving 30% of the US territories and oceans until the year 2030.[5]

In the time frame from the discovery of the American continent by the Europeans in 1492 to the present, in the final analysis, the conflict that occurred between the European immigrants and the Native Americans almost brought the end of the indigenous population. The indigenous population, which was estimated as 60 million during the time of discovery of the continent by the Europeans, dropped down to 270,000 by the end of the 19th century. It is accepted that a large portion of the deaths occurred due to infectious diseases that were foreign to the immune systems of the indigenous people such as smallpox, measles brought by the European immigrants. The remainder was brought down by force in various ways, their land was taken away, and the Native Americans were eventually removed from the fertile land they lived and were placed into camps called “reservations”. Today, the population of Native Americans living in the US is stated to be 5-6 million. Their ratio to the general population is 2%.

In the later years, claims were made that these practices constituted genocide. Hence, according to the “genocide” definition of the Convention on the Prevention and Punishment of the Crime of Genocide approved by the UN in 1948, it was concluded that the action of the American authorities towards the Native Americans can be defined as genocide.

As a result, it is possible to state that the indigenous people have an issue with the US administration that remains unsettled today. It is observed that there is negligence and a lack of interest in American society when the Native Americans are involved. Despite isolated statements that emerge from time to time, it is known that the US has not made a genuine effort to confront its Native American past.

From this angle and from a general viewpoint, a female politician of Native American descent being nominated as a candidate to the Secretary of the Interior is a significant development regarding US internal politics. It is understood that the new US President Joe Biden is willing to form a government that will represent all layers of the society.

This appointment is expected to be helpful in better understanding the living conditions imposed on the Native Americans by the European immigrants that can be characterized as oppression that dates back to the discovery of the American continent by Christopher Columbus in 1492 and especially the US gaining independence in 1776.

***This is the English translation of a Turkish-language article that was published by AVİM on 12 January 2021. To view the original article, please click: https://www.avim.org.tr/Blog/AMERIKAN-YERLISI-KOKENLI-DEB-HAALAND-IN-ABD-ICISLERI-BAKANLIGINA-ADAY-GOSTERILMESI-08-01-2021

[4] Nina Lakhani, “‘I’ll Be Fierce for All of Us’: Deb Haaland on Climate, Native Rights and Biden”, The Guardian, 27 December 2020, https://www.theguardian.com/environment/2020/dec/27/deb-haaland-interview-interior-secretary-native-americans.