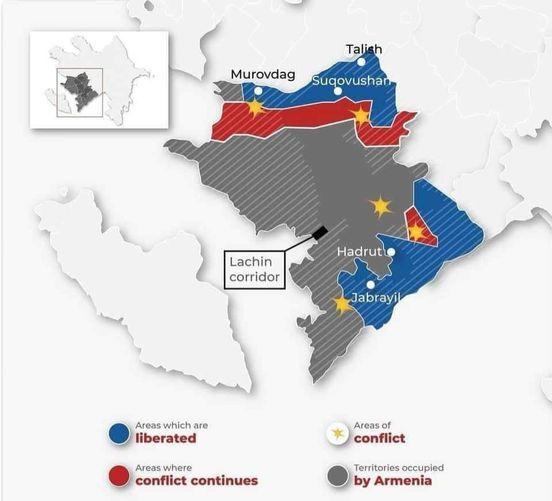 On Friday night it was announced, after 12 hours of meetings in Moscow, that “a humanitarian ceasefire” has been agreed to between Armenia and Azerbaijani in Karabakh. After the Saturday 12.00 start of the ceasefire, as the Azerbaijani forces stood down, it appears there were further Armenian artillery barrages and attacks, perhaps aimed at recovering lost ground. These were successfully repulsed and the ceasefire appears to be fragile at the time of writing.

Up to the cessation of the hostilities the Azerbaijani army had made a steady advance in liberating parts of its country occupied by Armenia since 1994. The Armenians, who had been obstructing negotiations for 26 years, suddenly became very keen on a ceasefire and peace. They were losing substantial amounts of territory and being driven back on the battlefield by a superior army. Their attempts to goad the Azeris into retaliating against Armenia proper, by firing missiles at the cities and towns of Azerbaijan, failed.

The Armenians also found their efforts to expand the war for Karabakh into a regional conflict thwarted. Mr. Putin told them during the week that Azerbaijan was not attacking Armenia, so they had no right to expect Russian assistance. It was clear that Armenia’s Prime Minister, Pashinyan, had made a miscalculation and overplayed his hand. He had provoked a war and his occupation forces were paying a heavy price in both blood and territory for his actions. The news of the negative battlefield situation has been kept from Armenians.

Many Azerbaijanis will be disappointed with the news of the ceasefire. It is not that they are warmongers and wished for a prolongation of conflict. However, they do want a final resolution of the conflict that has blighted their lives for a generation. They do not want future generations to face the burden and sacrifice that future conflict will entail. The steady erosion of the occupation of Azerbaijani territory by the Azerbaijani army’s successful military operations promised the possibility of a final resolution of the problem, perhaps once and for all. They will be concerned that the pause will give the Armenians a breathing space in which to organise more substantial resistance than they have been so far able to mount. And they will be concerned that they could be cheated at the conference table of the fruits of the hard won victories of the Azerbaijani forces on the battlefield. Transitions from war to politics are very problematic.

To read the rest of the article, please click: https://drpatwalsh.com/2020/10/10/an-end-to-the-armenian-occupation-of-karabakh-is-the-only-hope-for-peace-and-stability-in-the-region/