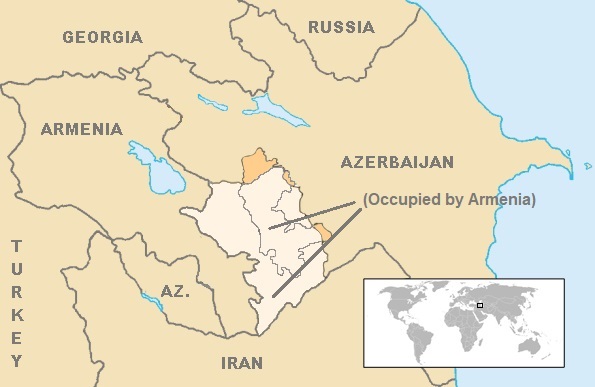 Illegal settlements of Lebanese and Syrian Armenians are taking place in the occupied territory of Azerbaijan, in Nagorno-Karabakh, in Zangilan, in Qubadli, in Lachin, in Kelbajar, in five villages in Agdam and in one village in Fizuli. These illegal settlements are replacing the displaced Azerbaijanis who were ethnically cleansed by Armenian terror squads. Many of these Azerbaijanis have died without an opportunity to be reunited with their homes; or in the mountains of Karabakh, choosing to be frozen than being killed or tortured by the Armenian terrorists. I request you to become the voices of those children who grew up into their adulthood as refugees or IDPs, who still dream of returning where they once played and enjoyed their lives before the terror came to take away their childhood forever.

More than 800,000 Azerbaijanis were forcibly removed out of their homes and their land as a result of this occupation. 20% of Azerbaijani territory today is occupied by Armenia, with the international community recognising Azerbaijan's territorial sovereignty and condemning Armenia’s military invasion. Four UN Security Council resolutions (822, 853, 874, 884) and the UN General Assembly Resolution A.RES/62/243 have demanded Armenia’s immediate, complete and unconditional withdrawal from Azerbaijan’s territory, to no avail. Please do consider the 613 Azerbaijani civilians – women, men and children – ruthlessly murdered in the town of Khojaly in 1992 by the Armenian military, upon their invasion of the town.

The Armenian government is now using the vulnerability of Lebanese Armenians who went through the tragedy of losing everything they had after the explosion of 4th August 2020 in Beirut. Armenia should not be allowed to settle the citizens of third countries on the territories which are internationally recognised as an integral part of Azerbaijan. Azerbaijan has sent $1 million in financial aid to Lebanon to help eliminate the damage caused by the explosion. However, they will not let Armenian occupants help Lebanese Armenians at the cost of taking away the very last thing that Azerbaijani IDPs have - their hope to return to their homes.

Armenia has every opportunity to settle Lebanese Armenians within Armenia itself, the density of population in Armenia is not high in comparison to its territory. The fact that they have decided to relocate Lebanese Armenians on the occupied territories of Azerbaijan only proves how undermining, destabilising and aggressive the policy of Armenian officials is. The Tufenkian Foundation, which is based in the United States, finances and builds these settlements.

There is a place only for one kind of peace - a just peace, achieved around the conference table. According to the rules of International Law, Azerbaijan territories should be immediately returned and all the IDPs should be allowed back safely to their homes.

Armenia should be prevented from pursuing its current policy of provoking a regional war that would greatly destabilize the region and endanger Europe's energy supplies. It is attempting to goad Azerbaijan (and potentially Turkey) into military action against Armenia to present itself in the role of victim, when it is very much the aggressor.

Please help to publicize this gross injustice by sharing this post.