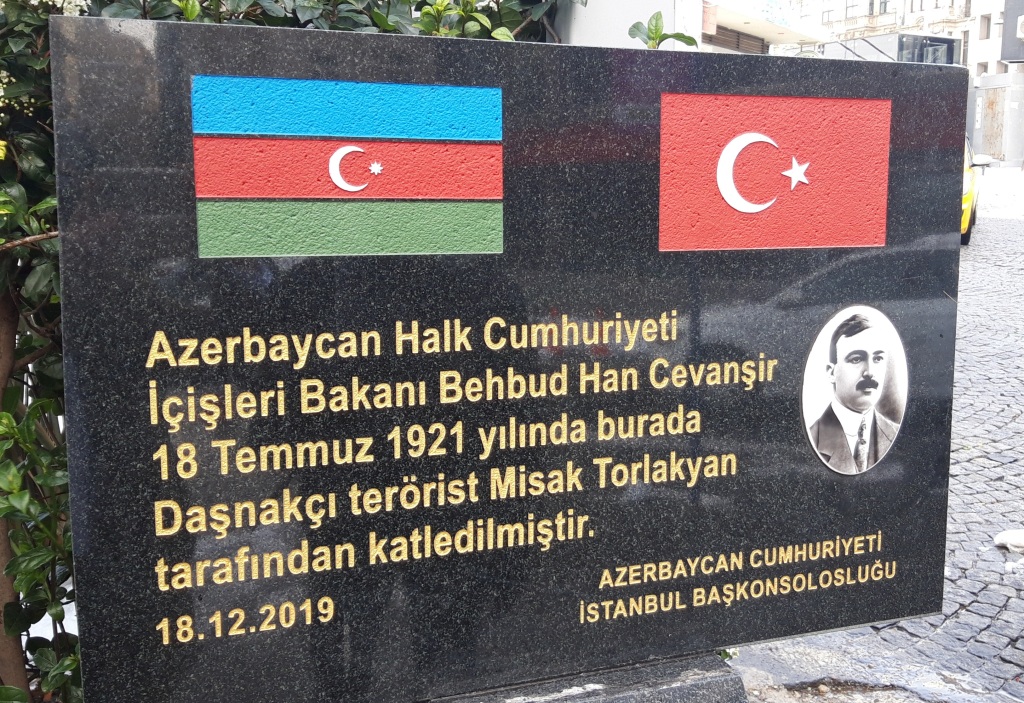 One hundred years ago, on 18th July 1921, a Dashnaksutyun terrorist, Misak Torlakian, assassinated the Azerbaijani statesman, Behbud Khan Javanshir, outside the Pera Palace Hotel in Istanbul.

Behbud Khan Javanshir was born in 1877 in the village of Azad Qaraqoyunlu, which was situated in the Javanshir Uyezd of the Elisabethpol Governorate. His father Azad Khan Javanshir was the great-grandson of the founder of the Karabakh Khanate, Panah Ali Khan, which was dissolved by the Russian occupation in the 1830s. Behbud Khan was a learned man, skilled in languages, including German, English, French, Russian, Georgian and Armenian. From 1890 to 1898, he attended the Realny School in Tiflis where he studied German. In 1902, he enrolled in the Freiberg University of Mining and Technology, the first-ever technical college, graduating in 1906. He was the first ever Azerbaijani to graduate from this important institution. He moved to London afterwards and quickly learned English.

Behbud Khan joined the Difai Party, founded secretly by Ahmad Bey Aghayev in 1905. This included such notables as Garay Bey Garaybeyov, Mammad Hasan Hajinski, Isa Bey Ashurbeyov and Niftali Bey Behbudov. Difai was established as a consequence of the 1905-6 troubles, to provide Azerbaijanis with the necessary political and military organisation to defend themselves against the well-organized and militarized Armenians who were aggressively asserting themselves against the poorly organised and unmilitarised Caucasian Muslims at the time. Difai aimed to develop the national consciousness of the Azerbaijani masses – something that was necessary to save them from the threat of eradication from the Dashnaksutyun. Behbud Khan was a member of its Central Committee and helped found the Difai party in Shusha, in August 1906.

Upon returning to Azerbaijan, Behbud Khan was employed as a senior engineer in the Baku oil industry, working in the Shibayev fields. He was a member of a charitable society which distributed aid to the poor and also a participant in the Nijat educational society. After a visit to Germany, Behbud Khan brought German wheat to Karabakh which was afterwards acclimatized by local farmers and is still grown today. He worked on improving roads in Karabakh and developing the science of cattle breeding there.

Later on, during the Russian February Revolution of 1917 he was elected a member of the Interim Executive Committee of the National Muslim Council. On June 17th 1918 Behbud Khan Javanshir was appointed Minister of Internal Affairs to the Azerbaijan Democratic Republic, a member of the second cabinet. It operated in Ganja at that time, having moved from Tiflis. Baku was still held by the Bolsheviks under Stephan Shaumyan, who had cleared out most of the surviving Azerbaijani population after a great massacre at the end of March 1918 and smashed the Musavat, its main political expression.

Please click to read the rest the article: https://drpatwalsh.com/2021/07/26/on-the-centenary-of-the-assassination-of-behbud-khan-javanshir/