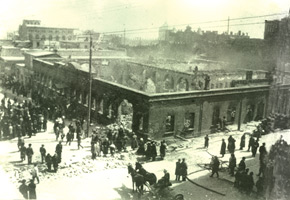 A genocide begins with the killing of one man – not for what he has done, but because of who he is," Nobel laureate Kofi Annan once said in a speech.

Armenian extremists have long been feeding the fabricated illusion of establishing a "Greater Armenia" from the Mediterranean Sea to the Caspian Sea. Inspired by the materialization of this mythical idea, they intermittently committed widespread bloodshed against the Turkic-Muslim population in different spots of this geography – particularly in the Caucasus and Anatolia. Likewise, Azerbaijan was no exception.

Between March and April 1918 armed Armenian formations mercilessly killed tens of thousands of innocent civilians based on their ethnic and religious affiliations, destroyed hundreds of Azerbaijani towns and villages and ravaged numerous cultural monuments, mosques and cemeteries. In that period, only in Baku, extremist Armenian armed units murdered and tortured about 30,000 Azerbaijani civilians, including women, children and elderly. Mass graves found in Baku were full of corpses of Azerbaijani women with ears and noses cut off and bellies torn open. The city hospital where 2,000 people had sought shelter was burned as well. The brutality of the armed Armenian thugs was also reflected in the reports of foreign diplomats and military officials posted in the Caucasus.

Within a short period of time, the massacres spread to Shamakhy, Guba, Irevan, Zengezur, Karabakh, Nakhchivan and Kars. For instance, more than 16,000 people were killed with the utmost barbarity in Guba province in 1918. The discovery of mass graves in the Guba region of Azerbaijan in 2007 reasserts a glimpse of the extent of inhumanity against Azerbaijanis. Fortunately, the arrival of the Islamic Army of the Caucasus in the summer of 1918 was able to stave off the further spread of the atrocities against Azerbaijanis.

The March-April events of 1918 became the focus following the proclamation of the Azerbaijan Democratic Republic (ADR). The ADR established the Extraordinary Investigation Commission (EIC) on July 15, 1918 to investigate the violence against the Azerbaijani population. This commission was comprised of the best lawyers of the time representing different ethnicities – Russians, Jewish, Polish, Georgians and even Armenians. Although the commission collected ample evidence, the collapse of the Azerbaijan Democratic Republic as a result of Soviet occupation made it impossible to complete the judicial investigation. However, Azerbaijan's late president, Haydar Aliyev, provided political recognition of the events with a decree on March 26, 1998 to announce the atrocities committed against Azerbaijanis to the world and by doing so, he immortalized the lives of the victims of the genocide.

Regretfully, the international community also failed to denounce the atrocities and prevent further wrongdoings by Armenia. Consequently, the indifference of the international community and a century-long impunity gave free rein to Armenia to renew its wanton destruction against Azerbaijanis in a much more systematic and organized way starting in 1988.

As a result, Armenia occupied 20 percent of Azerbaijan's territory – including the Nagorno-Karabakh region and seven surrounding districts, egregiously killed 20,000 individuals, expelled about 1 million people from their homeland and expunged everything affiliated with them by creating ghost towns like Aghdam. Extremist Armenian barbarity reached its apex in Khojaly on Feb. 25-26, 1992 when they recommitted genocide against Azerbaijanis in the small town. A total of 613 people from Khojaly, including 106 women, 63 children and 70 elderly, were tortured to death, 487 were left disabled and 1,275 were taken prisoner and subjected to persecution and insults.

Ongoing Armenian aggression against Azerbaijan, as well as the Khojaly genocide, demonstrates that Armenia is still obsessed with the consummation of their mythical agenda of the fabricated "Great Armenia." This path will only lead to disaster.

Their hate, brutality and lies relying on brute force have never benefitted anyone. It is our hope, humanity and truth with reliance on overwhelming power that will benefit all.