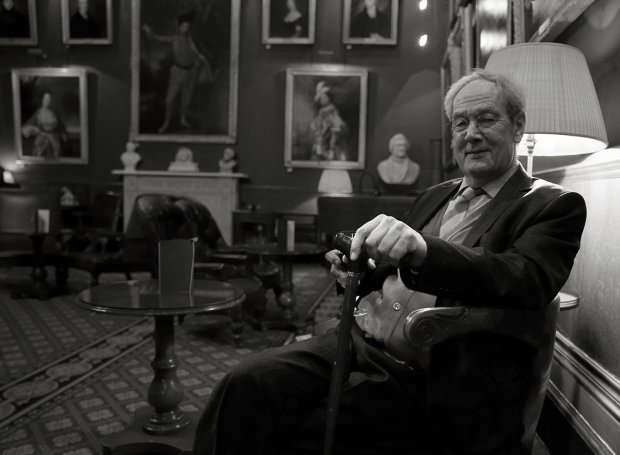 If Norman Stone and Professor Ali Doğramacı, then rector of Bilkent University, had not shared a flash of inspiration during an international conference in Ankara in 1995, the love affair between the country and its most famous international academic friend might never have begun. Norman was in Ankara, at a conference on Bosnia, not too happy with his life as a professor at Oxford, and what he saw of Bilkent appealed to him. Why not work there?

It was a sort of intellectual quantum leap. The disillusioned Oxford professor vanished, to be replaced for two decades until 2017 by a far happier professor of international relations at Bilkent.

In the mid-1990s Norman was already a national celebrity in the UK. Born in Scotland, trained at Cambridge, his first book, The Eastern Front 1914-1917, propelled him instantly to the front rank of the historical profession. In the UK this meant becoming a star public intellectual. But when Norman swapped a fellowship at Cambridge (which he always loved) for a full professorship at Oxford, things started to go wrong – despite a very happy family life in a huge Victorian mansion in north Oxford.

The professorship was marginal to the life of the history faculty. At Cambridge Norman had taught a succession of brilliant students destined to become famous figures in academia and politics. Somehow that did not happen at Oxford, though there were exceptions, such as Victor Orban, the present prime minister of Hungary.

Norman’s Oxford years saw a long gap in his book production while he poured his energies into journalism, writing a daily stream of coruscating and unconventional newspaper articles. Norman loved to shock, but he also knew how to avoid putting a foot seriously wrong, no matter how greatly he infuriated his adversaries. His articles made him a household name with British readers, loved by many, particularly on the political right, but they also triggered hostility, in many cases downright jealousy, among the Oxford dons.

At Bilkent, Norman’s early career as an inspired teacher and colleague resumed, despite a few sour faces in some parts of the Ankara academic establishment initially. Turks were impressed by his ability to speak 12 languages and make rapid progress in acquiring good Turkish late in life, as well as the mixture of mischievous conversation and mimicry, learning, jokes and affectionate anecdotes about friends. Karl Marx, Max Weber, and international relations theory and social theory generally, were out; The Struggle for Mastery in Europe, Marcel Proust and Trinity College Cambridge were in.

Given the population statistics, there are as many first-class minds in Turkey’s top universities as there are in the UK – maybe more – and Norman drew them to him, not just in the seminar room but also at nightly gatherings in the bars and restaurants of Ankara. These were occasions when good food, and especially drink, flowed freely.

My first meeting with Norman was a leisurely dinner in an ancient konak in Ankara castle. The conversation was of course learned, amusing and exhilarating, but I was sadly unable to keep pace with his consumption of rakı and had to be ferried home ignominiously, returning next day to settle the bill with waiters still muttering incredulously: “He drinks rakı like water.”

In his articles and broadcasts Norman began to tell the world of his life in Turkey and the new talent he was discovering. It was a revelation. Turkey had not had such a prominent or outspoken advocate before.

Turkey in the late 1990s was much less familiar to both the British public and its intellectuals than it is today, after several decades of digital media. There was a strong anti-Turkish lobby, springing ultimately from Turkey’s post-Ottoman Mediterranean adversaries. I remember sitting in a London club around that date and hearing some of its members denouncing Norman for moving to Turkey. If attitudes have shifted at least somewhat since then, a good deal of the credit belongs to Norman and Bilkent.

Norman brought his historian’s mind to bear on the great controversies of Ottoman history. He rejected the slick (and in terms of authentic historical evidence, actually rather weak) hard-line Armenian propaganda onslaughts against Turkey – and was repaid by a smear about this at the top of his Wikipedia entry, as if denialism was a key feature of his academic work. This was ironic, for Norman had played a prominent part in combating a writer in the UK who denied that Hitler’s genocide had happened, and he had come to Turkey because of humanitarian concern over Bosnia. But controversy never bothered him and he let the jibe stand.

At Bilkent his career as a writer was rekindled after a long gap. Though he never (as he admitted) quite regained the compelling scholarship and narrative of The Eastern Front, a succession of books aimed at the general reader emerged, on topics ranging from the world of the Atlantic Alliance after World War II, to brief histories of Turkey and Hungary, and of the two World Wars. Witty, even jokey in parts, all were commercial successes. Eight years on, at Blackwell’s, the UK’s top academic bookshop, there are still more copies of his history of Turkey on sale than any other book on the country. His tends to be the book people turn to – and its main theme is the way the country has been deliberately isolated from the international mainstream.

Not everyone loves Ankara, and Norman, too, flirted with the attractions of Istanbul. He certainly enjoyed life in the city’s Beyoğlu district, where for a while he owned a flat beside Galata Tower with a panoramic view over the Bosphorus and Old City, while teaching at Koç University. But after a couple of years he returned to Bilkent, a sort of alma mater to him, and one with which he retained links even after his retirement.

In the last decade Norman moved his home from Ankara to Budapest, though he returned regularly, partly for medical treatment (he admired Turkish medicine greatly) and partly to see friends. He was in Ankara only a week ago, guest of honour at a party thrown by Bilkent friends and former pupils. The thriving Russian Studies Centre which he founded at Bilkent is his legacy to his adopted home.

Most retirement jobs are a period of tranquil obscurity. Norman’s decades in Turkey were a kind of legendary epoch, bringing the country and its people to far wider attention, as well as helping to groom a rising new generation of academics. But there is one supreme quality of Norman’s which is far harder to convey. His company was a constant source of humour laced with erudition and surprise, bubbling with fun and irreverence. Those who had the good luck to know him will be sadly conscious that they will never enjoy conversation like his again.