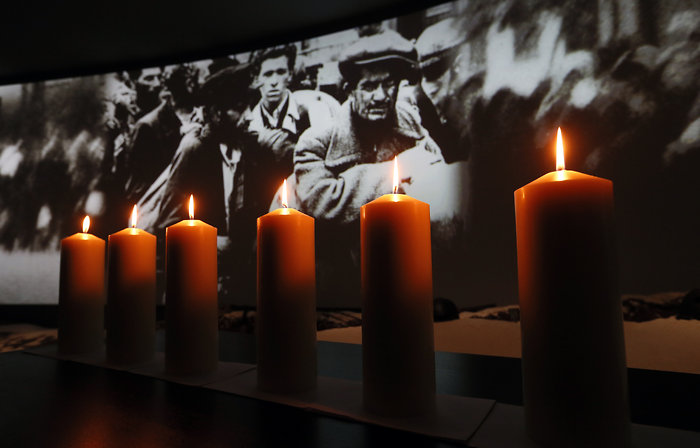 Reverend Chief Rabbi and Distinguished Head of the Turkish Jewish Community and Members,

Esteemed Ambassadors and the Members of Corps Diplomatique,

The “Holocaust” one of the worst tragedies in human history, is an appalling atrocity that should not happen again in any circumstances. 10 million people, including particularly the Jews, as well as the Roma people, the disabled, homosexuals and dissidents, were systematically exterminated in the concentration camps set up by the Nazis during the years of the World War II. They even attempted to develop efficient methods to kill more people at the same time. Holocaust is such an unprecedented horror.

The Holocaust is a manifestation of vengeance, hatred and fear against diversity. Disasters triggered by phenomena such as anti-Semitism, racism and extremism which significantly affected Europe at that time are still  in our memories. Regrettably, as history is full of so many disasters caused by racism and hatred against diversity; anti-Semitism, racism and xenophobia, as well as Islamophobia and anti-Christianism are on the rise again.

For this reason, our part is to fight fiercly against these phenomena, remember the Holocaust, take lessons from history and share these experiences with the future generations in order to ensure that such an atrocity will never happen again.

With this understanding, the United Nations adopted the Resolution declaring January 27th as “the International Holocaust Remembrance Day” in 2005, marking the day of liberation of the largest concentration camp, Auschwitz-Birkenau of the period of World War II, Turkey co-sponsored this Resolution. Accordingly, Turkey has been participating in the activities of the “International Holocaust Remembrance Alliance”, abbreviated as IHRA, as an observer country since 2008.

The purposes of IHRA, formed according to the fundamental principles of the Stockholm Declaration adopted in 1998 and working principles of which were determined duly, are specified as follows: to bring out all the truth related to this issue, researching the Holocaust in every aspect, to commemorate the victims of the Holocaust and to prevent recurrence of such an atrocity by explicating the Holocaust to future generations. We exert efforts to fulfil our responsibility to this end. Cognizant of the fact that this responsibility must be fulfilled through education, our universities host the 27 January International Holocaust Remembrance Day ceremonies held in Turkey for the last 6 years. Commemorating the victims of the Holocaust, we aim to create more awareness and raise curiosity of this matter among young people.

We deem our efforts on the Holocaust as a historical responsibility beyond our obligations within the IHRA and as a consequence of a principled approach.

Within the scope of our principled approach, in the last two years, commemoration ceremonies for those who lost their lives in the “Struma disaster”, one of the most dramatic events during the years of the Holocaust, are being held in Turkey, which was neither the perpetrator nor the victim of the Holocaust. The ship “Struma” was heading for Palestine with over 700 passengers, embarking in Port of Constantza in Romania on 24 February 1942. After waiting for 70 days offshore in Istanbul, it was torpedoed by a Soviet submarine. I do believe that these commemoration ceremonies for those who lost their lives in this incident are remarkable examples of our principled stance in facing history.

Moreover, we also contribute to the international fund created by the Auschwitz-Birkenau Foundation to this end. We are also cooperating with organizations such as the Project Aladdin, the Anne Frank House, Yad Vashem, as well as with umbrella organizations affiliated with the Holocaust and anti-Semitism.

We should also provide as much support as possible in the research activities on the Holocaust. Undoubtedly, the documentary "Turkish Passport" constitutes one of the most striking examples of this support.

On this occasion, I respectfully commemorate our senior diplomats who risked their lives to save our Jewish citizens in several European countries during the World War II and would like to thank them for this honourable and righteous inheritance they have left us. Among them, one got on and stop the train heading for the concentration camp to rescue our Jewish citizens; one lost his pregnant wife when his residence was bombed by the Nazis, just because he enabled our Jewish citizens to be transferred to Turkey with "Turkish Passports", symbolizing life and hope for dozens of people at that time. We will always remember with respect our diplomats and many more like them and their heroic deeds.

I would like to emphasize that Turkey will resolutely continue its efforts to raise awareness of the Holocaust and to prevent recurrence of such tragedy and never give up its struggle with phenomena such as anti-Semitism, racism, xenophobia, Islamophobia, which led to such a disaster and unfortunately still exist today. We can only eradicate such diseases by raising peaceful and tolerant youth who regards all kinds of diversity as a richness.

Before concluding my speech, I would like to point out that Ankara University has a privileged position in that upon the invitation of our great leader Ataturk, it opened its doors to the Jewish scientists who had been unjustly treated by the Nazi administration during the Holocaust, and enabled these scientists to provide contributions to Turkey. Therefore, I express my gratitude to Ankara University for hosting this meaningful ceremony as it did last year.

I would like to commemorate all victims of the Holocaust in your presence and wish that such sufferings will never occur again.