69TH ISSUE OF ERMENİ ARASTIRMALARI JOURNAL HAS BEEN PUBLISHED
Share : 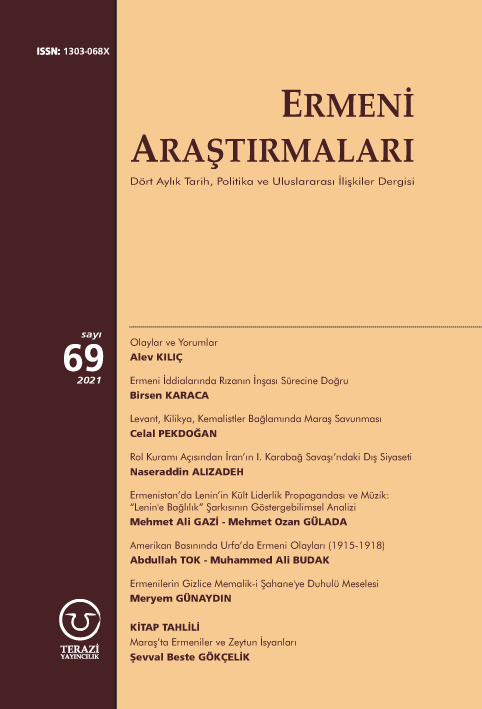 The 69th issue of the Ermeni Araştırmaları Journal contains an editorial, 6 research articles and a book review. As always the editorial written by Alev Kılıç titled “Olaylar ve Yorumlar” (Facts and Comments) covers Turkey-Armenia relations as well as domestic and international developments of Armenia in the period of April to August 2021. Early elections were held in Armenia which has been through a turbulent period after the Karabakh War and the Moscow ceasefire agreement, and a new political conjecture emerged after election results. Prime Minister Pashinyan’s agile and successful balance policy between Russia on one hand and the EU and U.S. on the other brought him a victory in the elections.  However new challenges have been waiting for Pashinyan who achieved success as a populist leader. Kılıç evaluated these developments in detail.

The first research article in the 69th issue is the article titled “Ermeni İddialarında Rızanın İnşası Sürecine Doğru” (Towards the Process of Manufacturing Consent in Armenian Allegations) by Birsen Karaca. Karaca highlighted the transformation of Armenian allegations in the light of breaking points of Armenian cultural history. She studied the process to impose these allegations as a historical fact which is called “Manufacturing Consent”.

The second research article in this issue Levant, Kilikya, Kemalistler Bağlamında Maraş Savunması” (The Defense of Marash in the Context of Levant, Cilicia, Kemalists) written by Celal Pekdoğan. In this article, based on the French military sources and Ottoman archive, the French army which came to occupy Marash, and the contribution of Armenian separatist units to them were evaluated.

The third article titled “Rol Kuramı Açısından İran’ın I. Karabağ Savaşı’ndaki Dış Siyaseti” (Iran’s foreign policy in the first Karabakh war from the Perspective of Role Theory)is written by Naseraddin Alizadeh. Evaluating Iran's political stance on the Karabakh problem within the framework of role theory, Alizadeh highlighted Iran's Caucasian policy and its perception towards Turkey and Russia. This evaluation, based on the memories of Ali Ekber Rafsanjani, who was the President during the First Karabakh War, also sheds light on Iran's political stance in the Second Karabakh War and its perceptions of the outside world.

The fourth research article of the 69th issue is the article written by Mehmet Ali Gazi and Mehmet Ozan Gülada titled “Ermenistanʼda Leninʼin Kült Liderlik Propagandası ve Müzik: “Lenin'e Bağlılık” Şarkısının Göstergebilimsel Analizi” (Lenin's Cult Leadership Propaganda and Music in Armenia: Semiotic Analysis of the Song of "Dedication to Lenin). This work of Gazi and Gülada enlighten the Sovietization policy that Armenia was exposed to during the Soviet Union period.

The fifth article in the 69th issue is study by Abdullah Tok and Mehmet Ali Budak titled “Amerikan Basınında Urfaʼda Ermeni Olayları (1915-1918)” (Reflections in the US Press of Events of Armenians in Urfa (1915-1918)). Tok and Budak conducted a study pointing out how the events in Anatolia were told unilaterally in the newspapers published in the USA in 1915-1918.

The last research article in the 69th issue is the article titled “Ermenilerin Gizlice Memalik-i Şahane'ye Duhulü Meselesi” (The Issue of Armenians Secretly Entrance to the Ottoman Lands) by Meryem Günaydın. Günaydın conducts a study entirely based on the Ottoman archives, and evaluates the secret return of Armenian committee members and ethnic separatists who went to other countries from the Ottoman lands, based on the archive records of that period.