72ND ISSUE OF ERMENI ARAŞTIRMALARI JOURNAL HAS BEEN PUBLISHED
Share : 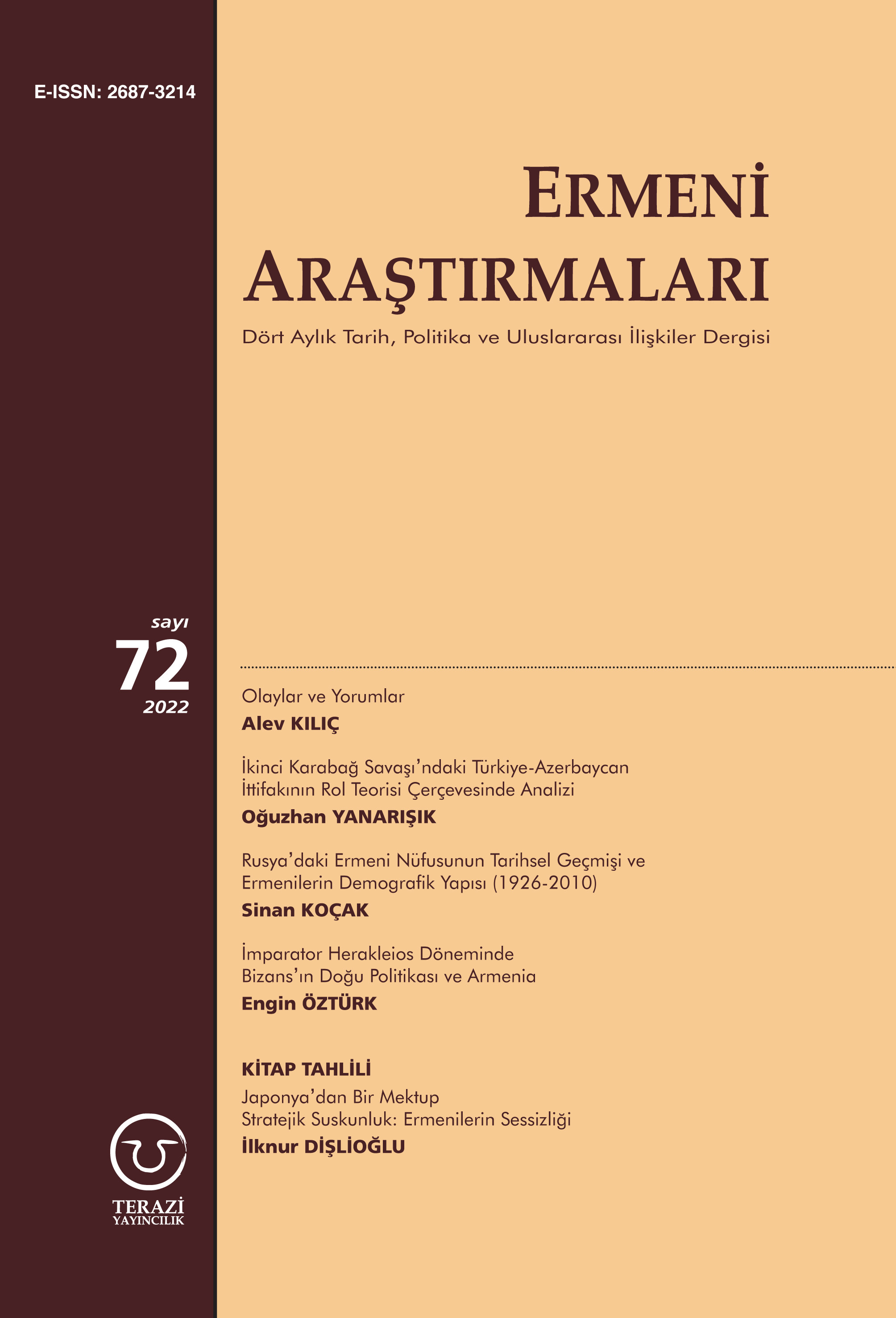 The 72nd issue of the Ermeni Araştırmaları journal contains one editorial, three research articles, and a book review.

In the editorial titled “Olaylar ve Yorumlar” (Facts and Comment) the developments in Armenia between May-November 2022 are evaluated by Ambassador (R) Alev Kılıç. He also considers the peace agreement process with Azerbaijan after the 44-day war of 2020 and the external dynamics affected by Turkey-Armenia relations. Although two years have passed since the end of the war and the ceasefire agreement, signed by the parties with the participation of Russia in Moscow, the peace agreement could not be signed yet. The article examines the attempts of Armenia to contact different interest groups in this process.

The first research article in our 72nd issue is Sinan Koçak's study titled "Rusyaʼdaki Ermeni Nüfusunun Tarihsel Geçmişi ve Ermenilerin Demografik Yapısı (1926-2010)" (Historical Background of the Armenian Population in Russia and the Demographic Structure of Armenians (1926-2010)). In his article, Koçak evaluates the demographic situation of Armenians living in Russia based on the censuses conducted during the Soviet and Russian Federation periods.

The second research article is titled "İkinci Karabağ Savaşıʼndaki Türkiye-Azerbaycan İttifakının Rol Teorisi Çerçevesinde Analizi" (Analysis of the Turkey-Azerbaijan Alliance in the Second Karabakh War in the Framework of Role Theory) by Oğuzhan Yanarışık. Yanarışık's article is based on role theory, which focuses on the role of leaders and decision-makers in international relations and evaluates them within the discourse analysis framework. Based on this, Yanarışık analysis the speeches of Turkish and Azerbaijani leaders and evaluates the effects of these discourses on the relations between these two countries.

The third one is by Engin Öztürk's article titled "İmparator Herakleios Döneminde Bizansʼın Doğu Politikası ve Armenia" (Byzantine Eastern Policy and Armenia in the Period of Emperor Heraclius). In this study, Öztürk focuses on Armenian-Byzantine relations during the Byzantine period, which has not been studied much in the literature.

The book review of the 72nd issue is by İlknur Dişlioğlu concerning the book titled “Japonyaʼdan Bir Mektup Stratejik Suskunluk: Ermenilerin Sessizliği" (A Letter From Japan - Strategically Mum: The Silence of the Armenians), which consists of letters written by Iver Torkian and published by AVİM last year.

You can reach the 72nd issue from here.