THE 46TH ISSUE OF THE REVIEW OF ARMENIAN STUDIES JOURNAL HAS BEEN PUBLISHED
Share : 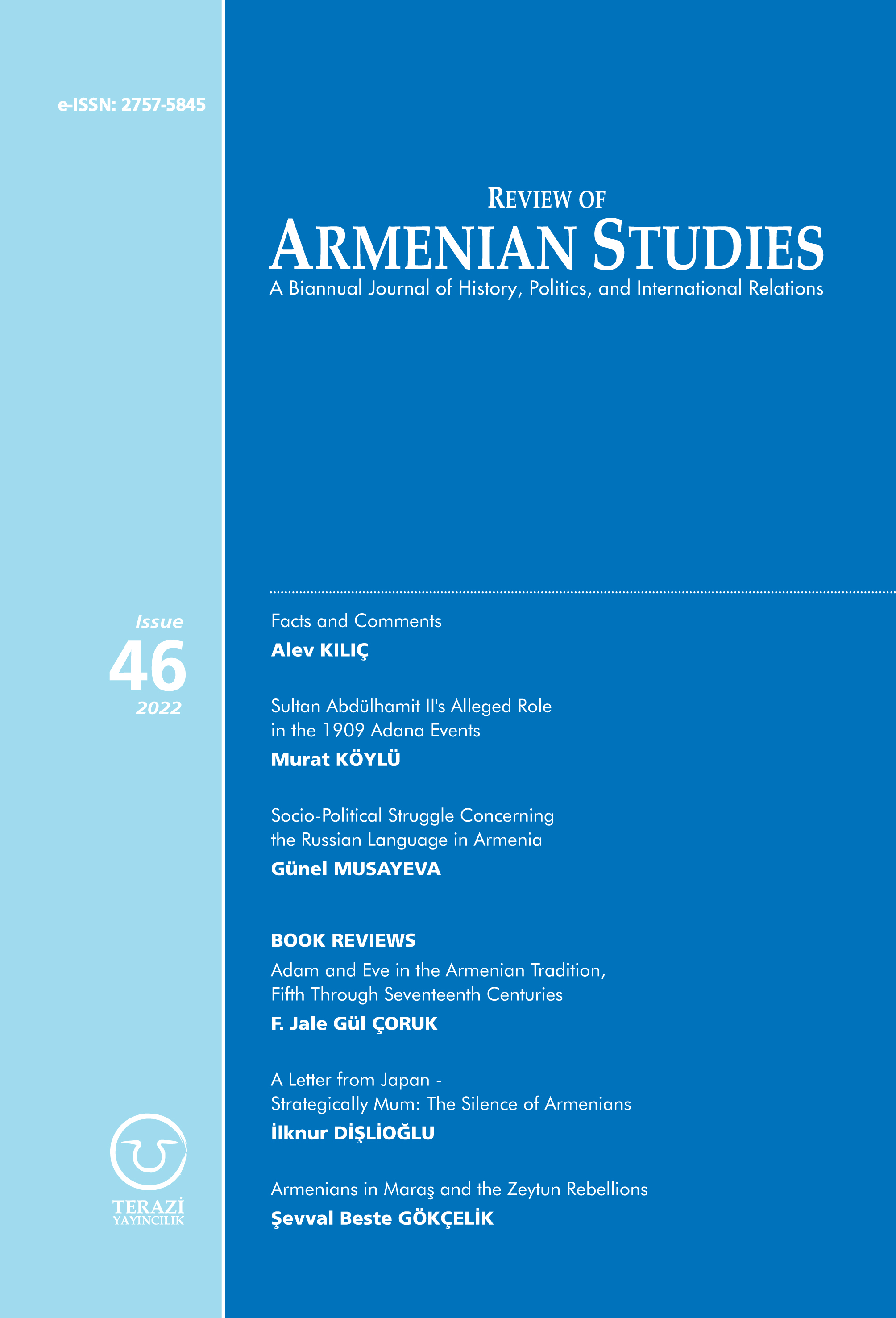 The first article in the 46th issue, titled “Facts and Comments” and authored by Ambassador (R) Alev Kılıç, covers the domestic and international developments of Armenia, the process for concluding the peace agreement with Azerbaijan following the 2020 Karabakh War, and Türkiye-Armenia relations in the period of June-November 2022. Two full years have elapsed since the end of the war and the cease-fire agreement signed by the leaders of Azerbaijan and Armenia in Moscow with the participation of the Russian President. It is possible to explain this lapse with the efforts of Armenia using delaying tactics as it appeals to third states with own interests in the region, to minimize its losses and make some gains. There is an active resistance to the peace agreement initiatives of the government also by a radical-militant group in the Diaspora and an opposition in the country. The most serious challenge before the peace agreement is the issue of delimitation and demarcation of the borders as it would lead to the acknowledgement of Karabakh to be within the boundaries of Azerbaijan. In foreign policy, the efforts to shift to the West without drawing the ire of Russia is being carried out with the re-fashioned concept of multi-vector foreign policy. Relations with Türkiye are moving forward in a step-by-step approach within the process of normalization. On the other hand, the long-established anti-Turk and anti-Türkiye stand of Armenia does not seem to be restrained despite this process.

In his article titled “Sultan Abdülhamit II`s Alleged Role in the 1909 Adana Events”, Assoc. Prof. Dr. Murat Köylü analyzes the circumstances surrounding the highly controversial Adana Events of 1909 that claimed the lives of many Ottoman Muslims and Armenians and the allegations that the Ottoman Sultan Abdülhamit II had orchestrated these events. To carry out such an analysis, he narrates the personality and deeds of Abdülhamit II, the formation of the Armenian national movement, the importance of Adana for the Armenian national cause, the events leading up to the flare up of the Adana events, the details of the events themselves, and the domestic and foreign reporting on these events. Based on the accounts of the kind of person Abdülhamit II was and the available evidence concerning the 1909 Adana Events, he argues that it is simply not possible to lay the sole blame of the events on Abdülhamit II, since a variety of factors had come together that led to the said events. Köylü adds that Armenian nationalists and Western media nevertheless blamed Abdülhamit II based on hearsay and exaggerated accounts, contributing to Abdülhamit II’s unwarranted notoriety in the Western world.

The three book reviews of the 46th issue are as follows:

The first review is by F. Jale Gül Çoruk on the book titled “Adam and Eve in the Armenian Tradition, Fifth Through Seventeenth Centuries”. The book is heavy on theology, but is important for those conducting research on Armenian studies because it reveals aspects of the historical trajectory of Armenian culture and Armenian’s conception on morality informed by their religious beliefs. The book also contains a useful biography section on many Armenian authors throughout history.

The second review is by İlknur Dişlioğlu on the book titled “A Letter from Japan - Strategically Mum: The Silence of Armenians”, a fascinating collection of letters by Iver Torikian, an Armenian American scholar living and working in Japan. Torikian gives an account of his family and life that stretches from Türkiye to the US and Japan, and expresses his frustration at the state of Turkish-Armenian relations. He argues that his own people and the Western world exclusively focus on the plight of the Armenians concerning controversial historical events to the detriment of the Turkish side, and that many Armenian authors writing about such subjects are either distorting facts or withholding them to suit their own narrative.

The third and final review is by Şevval Beste Gökçelik on the Turkish language book titled “Maraş’ta Ermeniler Ve Zeytun İsyanları” (“Armenians in Maraş and the Zeytun Rebellions”). This book gives a detailed account of Ottoman society and inter-communal relations between the Turks and the Armenians by focusing on Zeytun in specific and Maraş in general. The book argues that the position of Zeytun and its various features made it a suitable place for the occurrence of frequent Armenian rebellions. It adds that the inflammatory activities of Western-Christian missionaries and Armenian revolutionary committees, and the resulting Armenian rebellions in the region severely damaged the trust in Turkish-Armenians relations and dragged them to a breaking point.