THE 70TH ISSUE OF THE ERMENİ ARAŞTIRMALARI JOURNAL HAS BEEN PUBLISHED
Share : 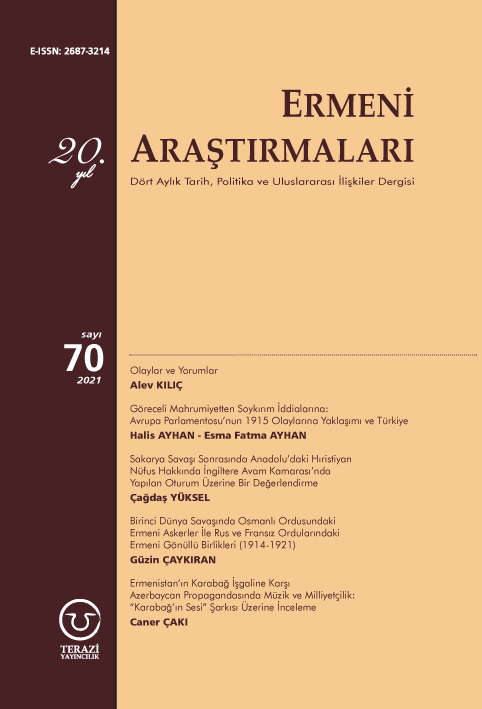 Alev Kılıç evaluates the developments in Armenia between August-December 2021 in his editorial titled “Olaylar ve Yorumlar” (Facts and Comments). After the 44-days War and 9 November Ceasefire Declaration in Moscow, it has become necessary for the Armenian Prime Minister to put populist politics aside and take steps befitting a statesman. Unfortunately, the initial indications in the period under review of Armenia’s policy towards Turkey appears to be following a centuries-long practised traditional pattern of submitting allegiance to rising powers and expecting moral and material rewards for availing itself to the service of those in adversity with Turkey.

The first research article in the 70th issue is the “Göreceli Mahrumiyetten Soykırım İddialarına: Avrupa Parlamentosu’nun 1915 Olaylarına Yaklaşımı ve Türkiye” (From Relative Deprivation to Genocide Assertions: European Parliament's Approach Against the 1915 Events and Turkey) written by Halis Ayhan and Esma Fatma Ayhan. In this article which is produced from the master thesis of Esma Ayhan, it has been tried to explain why the so-called genocide narrative has been so emphasized by the diaspora in the eyes of European countries within the framework of the theory of relative deprivation. In this context, the repercussions of the Armenian theses ‘defenders’ relative deprivation discourse within the EP and the effects on relations between Turkey and the EU were discussed, especially through questions with written answers.

The second research article is titled “Sakarya Savaşı Sonrasında Anadolu’daki Hıristiyan Nüfus Hakkında İngiltere Avam Kamarası’nda Yapılan Oturum Üzerine Bir Değerlendirme” (An Evaluation of a Session in The House of Commons of Great Britain on the Christian Population in Asia Minor after the Battle of Sakarya) by Çağdaş Yüksel. In his article, Yüksel analyses British politicians perspectives against the Christian minorities and Turks in Anatolia through the speeches given in the House of Commons.

The third article in the 70th issue is the article titled “Birinci Dünya Savaşında Osmanlı Ordusundaki Ermeni Askerler İle Rus-Fransız Ordularında Ermeni Gönüllü Birlikleri (1914-1921)” (Armenian Soldiers in the Ottoman Army and Armenian volunteer Units in the Russian and French Armies during the First World War (1914-1921)) written by Güzin Çaykıran. Based on her research in the ATASE and Presidency archives, Çaykıran deals with the process of joining the Armenian Volunteer Units in the Russian Caucasian Army and then the Eastern Legion of the Armenian soldiers.

Finally, the fourth research article in this issue is Çaner Çakı's article titled “Ermenistan’ın Karabağ İşgaline Karşı Azerbaycan Propagandasında Müzik ve Milliyetçilik: “Karabağ’ın Sesi” Şarkısı Üzerine İnceleme” (The Music snd Nationalism in Azerbaijan Propaganda Against Armenia's Invasion of Karabakh: An Evaluation of the “Voice of Karabakh” Song). In the study, the music video called “The Voice of Karabakh”, which introduces the Karabakh struggle of Azerbaijan in 2020 was examined, and it was tried to reveal how Azerbaijan reflected the occupation of Nagorno-Karabakh by the Armenian forces in both national and international public opinion and what messages it gave to the Azerbaijani public about Nagorno-Karabakh.

You can find the online version of our journal here.