ARTICLE TITLED: “THE RELATIVITY OF SELF-DETERMINATION CONCEPTIONS REGARDING THE NAGORNO-KARABAKH CONFLICT"
Share : 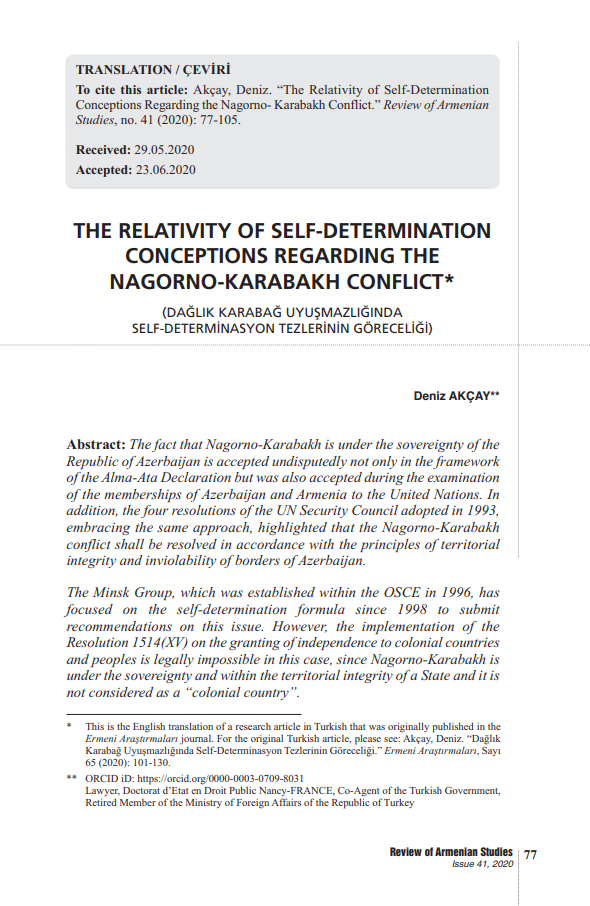 The fact that Nagorno-Karabakh is under the sovereignty of the Republic of Azerbaijan is accepted undisputedly not only in the framework of the Alma-Ata Declaration but was also accepted during the examination of the memberships of Azerbaijan and Armenia to the United Nations. In addition, the four resolutions of the UN Security Council adopted in 1993, embracing the same approach, highlighted that the Nagorno-Karabakh conflict shall be resolved in accordance with the principles of territorial integrity and inviolability of borders of Azerbaijan. The Minsk Group, which was established within the OSCE in 1996, has focused on the self-determination formula since 1998 to submit recommendations on this issue. However, the implementation of the Resolution 1514(XV) on the granting of independence to colonial countries and peoples is legally impossible in this case, since Nagorno-Karabakh is under the sovereignty and within the territorial integrity of a State and it is not considered as a “colonial country”. Moreover, it is also impossible to implement the articles of the UN General Assembly Resolution 2625(XXV) regarding the self-determination in case of the non-existence of widespread human rights violations and oppressions. On the other hand, the Chiragov judgement of the ECHR established that selfdetermination cannot not be introduced as a realistic settlement formula with regards to Nagorno-Karabakh, which is under the military, political, and economic influence of Armenia.