IMPLEMENTATION OF THE EU’S NORMATIVE POWER IN ARMENIA: TRANSFORMATION OR TOLERATION?*
Share : 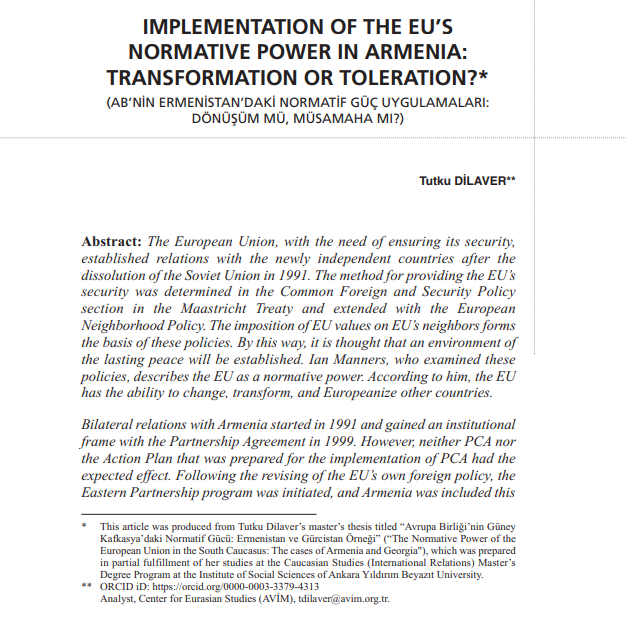 The European Union, with the need of ensuring its security, established relations with the newly independent countries after the dissolution of the Soviet Union in 1991. The method for providing the EU’s security was determined in the Common Foreign and Security Policy section in the Maastricht Treaty and extended with the European Neighborhood Policy. The imposition of EU values on EU’s neighbors forms the basis of these policies. By this way, it is thought that an environment of lasting peace will be established. Ian Manners, who examined these policies, describes the EU as a normative power. According to him, the EU has the ability to change, transform, and Europeanize other countries.

Bilateral relations with Armenia started in 1991 and gained an institutional frame with the Partnership Agreement in 1999. However, neither PCA nor the Action Plan that was prepared for the implementation of PCA had the expected effect. Following the revising of the EU’s own foreign policy, the Eastern Partnership program was initiated, and Armenia was included this program. In 2017, the Comprehensive and Enhanced Partnership Agreement was signed. With this Agreement, the EU got a chance to act as a normative power in Armenia. The purpose of this article is to evaluate the effectiveness of the EU as a normative power in Armenia. For this purpose, the 1999 Association Agreement, the Action Plan, the Country Progress Reports, the Comprehensive and Enhanced Partnership Agreement and finally the implementation reports of this agreement will be examined.