THE STRATEGIC THINKING OF CHINA’S “BELT AND ROAD” INITIATIVE (BRI), MIDDLE CORRIDOR AND THE BRI
Share : 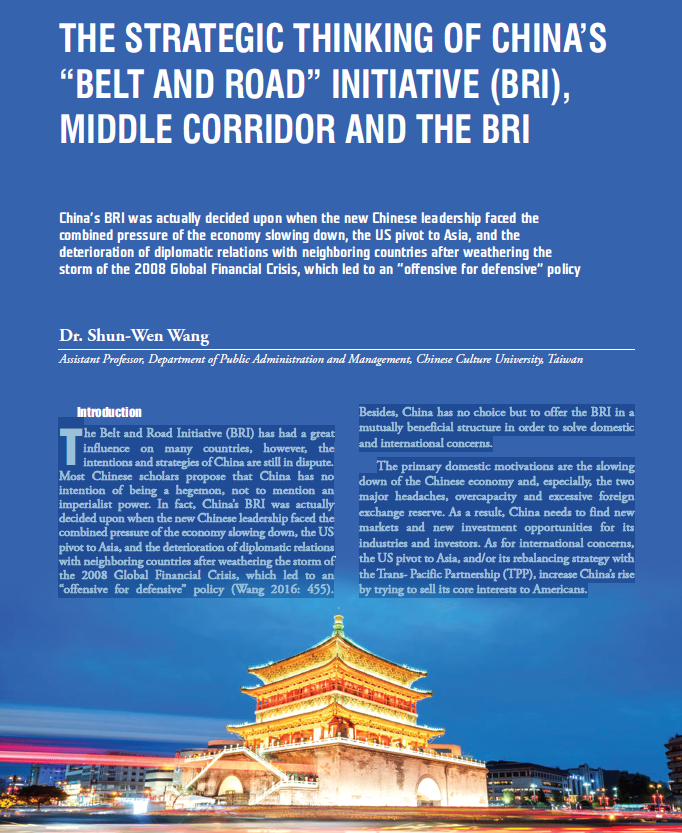 The Belt and Road Initiative (BRI) has had a great influence on many countries, however, the intentions and strategies of China are still in dispute. Most Chinese scholars propose that China has no intention of being a hegemon, not to mention an imperialist power. In fact, China’s BRI was actually decided upon when the new Chinese leadership faced the combined pressure of the economy slowing down, the US pivot to Asia, and the deterioration of diplomatic relations with neighboring countries after weathering the storm of the 2008 Global Financial Crisis, which led to an “offensive for defensive” policy (Wang 2016: 455). Besides, China has no choice but to offer the BRI in a mutually beneficial structure in order to solve domestic and international concerns.

The primary domestic motivations are the slowing down of the Chinese economy and, especially, the two major headaches, overcapacity and excessive foreign exchange reserve. As a result, China needs to find new markets and new investment opportunities for its industries and investors. As for international concerns, the US pivot to Asia, and/or its rebalancing strategy with the Trans-Pacific Partnership (TPP), increase China’s rise by trying to sell its core interests to Americans.