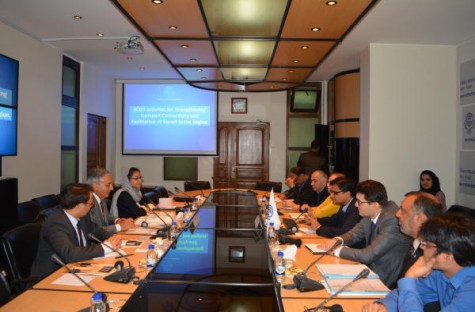 On 14-15 September, AVIM (Center for Eurasian Studies) delegation as the invitee of the Tehran-based Institute for Political and International Studies (IPIS) attended several meetings with the representatives of think tanks and academic circles in Tehran.

In the first meeting with the experts of the IPIS and several other institutions on September 14th, AVIM delegation discussed the current state of affairs in the South Caucasus and the Turkey-Iran relations with their Iranian counterparts. During this meeting, the prospective developments that the new Silk Road project would bring about were also debated.

On September 15th, AVIM’s director Ambassador (R) Alev Kılıç made a presentation in the workshop at the Caucasus Studies Institute that was attended by the researchers of this institute and masters and PhD students from different universities. In this workshop, AVIM experts Dr. Kerem Turgut Tuncel and Özge Nur Öğütçü also delivered speeches on Turkey-Iran relations within the context of the recent developments in Central Asia and South Caucasus. The workshop was concluded by a Q&A session.

After this workshop, AVIM delegation paid a visit to the Political Science and Law Faculty at Tehran University. There, AVIM experts held a meeting with the Head of Central Eurasia Research Department Prof. Dr. Elaheh Koolaee and exchanged their views on the possibilities of enhancing communication and cooperation between AVIM and Tehran University.