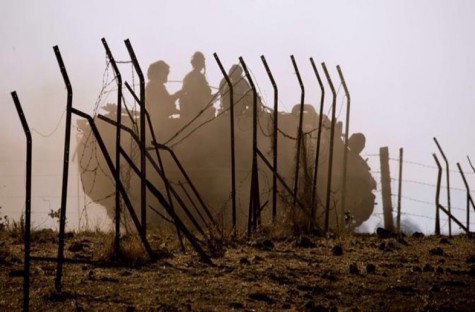 (Reuters) - Israel attacked several Syrian military sites on Wednesday in retaliation for a roadside bombing that wounded four of its troops on the occupied Golan Heights on Tuesday, the Israeli military said.


It said targets included a Syrian military headquarters, a training facility and artillery batteries. Aircraft carried out the overnight strike, said Lieutenant-Colonel Peter Lerner, an Israeli military spokesman. He described targets as military facilities on the Syrian-held side of the Golan.


Israel captured the Golan from Syria in the 1967 war and annexed it in a move not recognized abroad. Tuesday's wounding of the soldiers as they patrolled the separation line on the strategic plateau marked Israel's worst casualties there since an insurgency erupted in Syria more than three years ago.


Israeli Defence Minister Moshe Yaalon said in a statement that the Syrian army had aided and abetted Tuesday's attack.


"We hold the Assad regime responsible for what happens in its territory and if it continues to collaborate with terrorists striving to hurt Israel then we will keep on exacting a heavy price from it and make it regret its actions," Yaalon said.


Parts of the Syrian-held side of the Golan are controlled by rebels fighting to topple President Bashar al-Assad, including al Qaeda-inspired militants hostile to the Jewish state. Israel says Lebanese Hezbollah guerrillas helping Assad battle the insurgency also have a presence on the Golan.


Spillover violence on the Golan from the Syrian civil war has often drawn Israeli return fire against Syrian positions, ending what had previously been a stable, decades-old stand-off between the foes.


Israel is believed to have struck inside Syria several times since 2013, against advanced weapons it believed were intended for Hezbollah, attacks it has neither confirmed nor denied.


Hezbollah accused Israel of carrying out an air strike on one of its bases on the Lebanon-Syria border last month and vowed to respond. Israel said it would hold the Beirut government responsible if Hezbollah attacked it from Lebanese territory.