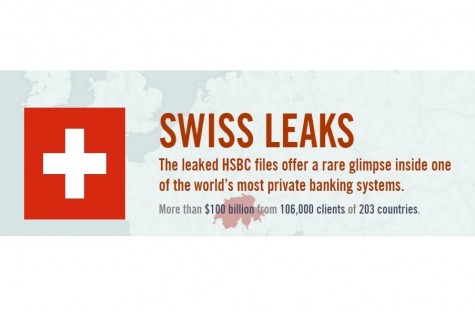 The International Consortium of Investigative Journalists (ICIJ) has begun publishing “Swiss Leaks”; a series of leaked files from the HSBC’s (world’s second largest bank) branch in Switzerland. These files are related to 106,000 clients from 203 countries, and the accounts contain more than 100 billion dollars in total.[i] The journalists who have carried out investigations on this issue allege that HSBC, via its branch in Switzerland (well known for its confidential banking system), helped many of its clients to engage in tax evasion and to conceal their money.[ii]

One of the clients of the Switzerland branch who has been exposed via these leaks is Catholicos Karekin II, head of the Mother See of Holy Etchmiadzin and the spiritual leader of all Orthodox Armenians. Leaked documents reveal the following about Karekin II:

“HSBC internal files first listed Karekin II among its clients in 2000. He was connected to an account named “His Holiness Karekin II Nersis” that listed one bank account and held as much as $1.1 million in 2006/2007. The leaked files do not specify the exact role that Karekin II had in relation to the account.”[iii]

The existence of a Swiss bank account under Karekin II’s name, however, does not automatically mean that Karekin II is engaging in illicit activities. Regarding this, ICIJ’s Swiss Leaks website states the following:

“There are legitimate uses for Swiss bank accounts and trusts. We do not intend to suggest or imply that any persons, companies or other entities included in the ICIJ Swiss Leaks interactive application have broken the law or otherwise acted improperly. If you find an error in the database please get in touch with us.”[iv]

Karekin II has not remained silent on this issue.[v] His spokesperson has stated to the ICIJ that the account was actually opened by Karekin II’s predecessor and that it was transferred to Karekin II upon his predecessor’s death. The spokesperson has also stated that the account is used for church related services and activities, and that both the Mother See of Holy Etchmiadzin (as a national religious institution) and its Catholicos Karekin II are immune from taxation. In this way, Karekin II has argued that he has no need to engage in tax evasion.

However, in the past, Karekin II has been accused of being obsessed with money and of engaging in fraudulent financial activities. Just a couple of months ago Patriarch Nourhan Manougian, head of the Armenian Patriarchate of Jerusalem, harshly criticized Karekin II for this reason, among others.[vi] The fact that there is a secretive Swiss bank account with substantial money under Karekin II’s name is apt to serve to enflame disputes regarding Karekin II’s character and conduct.