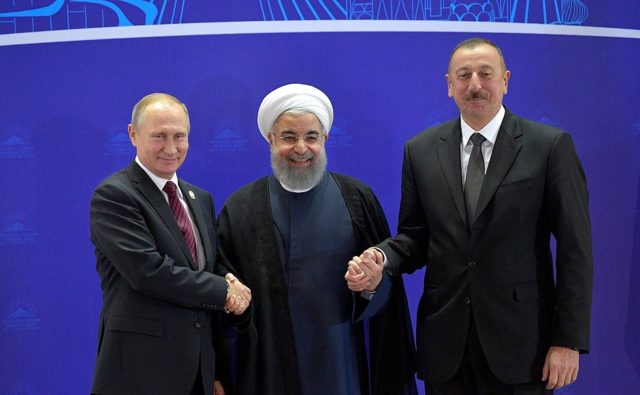 The President of Azerbaijan Ilham Aliyev recently described 2017 as a year of recovery from the economic crisis for his country (President.az, January 10). Yet, at the same time, Azerbaijan, along with the other states of the South Caucasus, Georgia and Armenia, spent the past year trying to ward off multiple potential threats linked to an unstable, volatile and increasingly dangerous international environment that impacted their region. Indeed, concerns about those negative developments and their possible acceleration were also voiced by President Aliyev in his speech devoted to the results of Azerbaijan’s socio-economic development during 2017 and the country’s objectives for the future (President.az, January 10).

Although Azerbaijan was not a key actor or even an active playground for the complicated international power politics that defined last year, it nevertheless was affected by negative spillover effects from the great power rivalry and confrontation in the Middle East and Eastern Europe as well as the volatile and unpredictable relations in the Russia-West-Turkey triangle.

In light of this difficult international environment, Azerbaijan in 2017 continued to pursue a pragmatic and realpolitik foreign policy. Specifically, Baku sought to maintain balanced, normal and cooperative relations with regional neighboring powers and global power centers. The development of new trans-regional transit corridors across the South Caucasus was at the center of Azerbaijan’s foreign policy. And this focus on transit routes continued to be an important sphere of regional competition over the past year (see EDM, April 13, 2016). Both Azerbaijan and its main adversary, Armenia, have sought to launch competing north–south transit routes across their territories. Last fall’s decision by Russia, Iran and Azerbaijan to progress with the North–South Transport Corridor (NSTC) in essence further isolated Yerevan regionally by undermining the rationale for constructing the rival Armenian-Iranian rail link, also known as the South Armenian Railway (see EDM, November 9, 2017).

Additionally, Azerbaijan’s successes last year in developing east–west transit routes effectively contributed further to isolating Armenia regionally. On October 30, 2017, Baku hosted the long-awaited opening ceremony of the Baku–Tbilisi–Kars (BTK) railroad (Golos-ameriki.ru, October 30, 2017), which will serve as a strategically important link in China’s trans-Eurasian Silk Road Initiative connecting East Asia and Europe (Sam.az, 2017; see EDM, November 30, 2017). Two days later, on November 1, the president of Azerbaijan visited Tehran to attend a trilateral summit with his counterparts from Russia and Iran (Echo, November 2, 2017). In addition to its geo-strategic and economic significance, the Azerbaijani-Russian-Iranian meeting had symbolic and historic importance: Specifically, the two regional powers that in the 19th century had fought over the territories of modern-day Azerbaijan explicitly reaffirmed Baku’s independence during the summit.

Probably the most important event of 2017 for Azerbaijan was the extension of the contract for the offshore Azeri–Chirag–Gunashli oil field until 2050. On September 14, the Azerbaijani government and the State Oil Company of the Republic of Azerbaijan (SOCAR), together with BP, Chevron, INPEX, Statoil, ExxonMobil, TP, ITOCHU and ONGC Videsh, signed an amended joint development agreement and a production sharing agreement (PSA) for the Azeri and Chirag fields as well as the deep-water portion of the Gunashli Field in the Azerbaijan sector of the Caspian Sea (Bp.com, September 14, 2017). Baku’s share of the oil profits on this contract amount to 75 percent, so the adoption of this deal means billions of dollars in additional revenues over the coming decades.

According to Aliyev, last year 99 percent of the Shah Deniz II offshore gas field project was realized. Furthermore, 93 percent of the pipeline connecting Azerbaijan and Georgia within the Southern Gas Corridor (which will link Azerbaijan’s Caspian natural gas fields with customers in Southeastern Europe) was finalized, and 90 percent of the Trans-Anatolian Gas Pipeline (TANAP—the longest pipeline link within the Southern Gas Corridor) was constructed. In the coming years, gas will be another major source of revenue for Azerbaijan (President.az, January 10).

The past year was also marked by news that the five Caspian littoral states (Azerbaijan, Russia, Kazakhstan, Turkmenistan and Iran) were close to reaching an agreement on the final delimitation of the Caspian Sea. The document will be signed during an upcoming meeting of the five countries’ presidents (Azernews, July 17, 2017; EDM, May 8, 2017). The resolution of the final status of the Caspian Sea might open new prospects for constructing a Trans-Caspian pipeline, which could bring vast amounts natural gas to European consumers from Turkmenistan, Kazakhstan and Uzbekistan (Oilgas, January 16, 2018; Azernews.az, December 27, 2017; Contact, December 24, 2017).

Meanwhile, the complicated international environment distracted mediators last year from coming any closer to reaching a resolution of the Karabakh conflict. After the deadly skirmishes that broke out along the Line of Contact in April 2016 (see EDM, April 6, 2016; May 6, 2016), the frontline between Azerbaijan and Armenia was relatively quiet over the course of 2017, with fewer casualties. Meetings of the presidents of Azerbaijan and Armenia and multiple rounds of negotiations during the last 12 months did not yield any substantial outcomes.

Indeed, 2017 was not the right time for the leadership in Armenia to put forth compromises or concessions; rather, the government in Yerevan needed to look tough and hardline since the country was approaching perhaps the most sensitive period since its independence. For Armenia, 2018 will be a year of institutional and constitutional transition from a semi-presidential system to a parliamentary system, in which the prime minister will take over from the president the role of commander in chief of the Armed Forces and the main center of executive power and foreign policy. Armenian President Serzh Sargsyan’s apparent desire to continue to rule his country as prime minister following the constitutional change was met by some resistance domestically. After the April 2016 skirmishes along the frontline, possible scenarios for comprise over Karabakh inspired political instability and the revolt of obdurate nationalist radicals in Armenia calling themselves the Sasna Dzres (Daredevils of Sassoun) (RFE/RL, July 18, 2016; Civilnet, July 15, 2016; Al Jazeera, July 21, 2016). Undoubtedly, the trajectory of the political developments in Armenia will significantly impact the resolution of the conflict with Azerbaijan; therefore, they are carefully observed in Baku.

Lack of diplomatic movement on the Karabakh conflict notwithstanding, Azerbaijan nevertheless demonstrated its determination last year to press forward on various lower-level issues. The government restored 150 houses in the village of Jojug Marjanli, recaptured from occupying Armenian forces in the April 2016 battles. The internally displaced persons (IDP) were then allowed to return to their home village (Azernews.az, accessed January 23, 2018; President.az, June 14, 2017). Furthermore, the international community’s wide rejection of the independence referendums in Iraqi Kurdistan and Spanish Catalonia in 2017 increased hopes in Baku that Azerbaijan’s foreign partners will show similar resolute commitment to its territorial sovereignty.

The year 2018 will mark the centenary anniversary of the first republic of Azerbaijan (Commonspace.eu, January 15). In 1918, the Azerbaijan Democratic Republic declared its independence in a particularly difficult international and regional environment, only to lose its statehood two year later after being absorbed by the Soviet Union. One hundred years later, it is still not easy for a small landlocked country to survive and remain independent. Indeed, 2018, which Baku has coined the year of the First Republic (1918–1920), will undoubtedly present its own challenges.