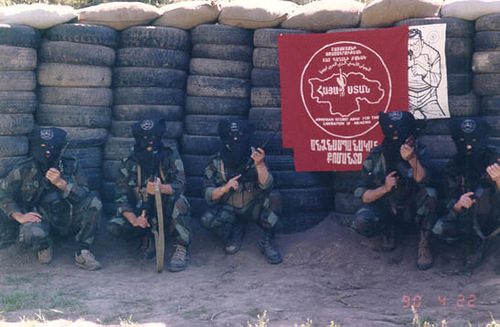 On January 27, 1973, Turkish Consul General to Los Angeles Mehmet Baydar and Vice Consul Bahadir Demir were murdered by Armenian terrorist Gourgen Yanikian at the Biltmore Hotel in Santa Barbara. Yanikian was convicted of first degree murder and sentenced to life imprisonment. On October 26, 1973, a group calling itself, “The Yanikian Commandos” planted a bomb outside the Turkish Information Office in New York and demand the release of Yanikian. On October 4, 1977, Armenian terrorists bombed the home of Professor Stanford Shaw, a renowned Jewish American scholar of Ottoman history at the University of California in Los Angeles (UCLA).

On October 6, 1980 the home of Turkish Consul General to Los Angeles Kemal Arikan was firebombed. Eventually Harout Sassounian would be caught and convicted of the crime. On October 12, 1980 a travel agency owned by a Turkish American in Los Angeles is bombed, nearly killing a British tourist who was driving by at that moment. The Justice Commandos of the Armenian Genocide (JCAG) claimed responsibility.

Then, as if to mark the anniversary of Yanikian’s crimes, on January 28, 1982, two Armenian terrorists Hampig Sassounian, Harout’s younger brother, and Krikor “Koko” Saliba murdered Kemal Arikan as he was waiting at a busy intersection in his car. The JCAG confirmed that Sassounian and Saliba are members. Saliba escaped to Lebanon and evaded justice. His partner, Hampig Sassounian, would face trial for the murder.

On May 4, 1982, a gunman murdered Turkish Honorary Consul General Orhan Gunduz in Boston, while he was waiting in his automobile in rush-hour traffic. JCAG claimed responsibility.

On January 4, 1984, a California jury convicted Hampig Sassounian of first-degree murder and sentenced him to life imprisonment. Just two weeks later, California Governor, George Deukmejian, also of Armenian descent, ordered the release of Gourgen Yanikian, who had only served 11 years of his life sentence When Yanikian died shortly afterward, several hundred Armenian Americans attended his funeral and erected a memorial in his honor. The Armenian American community’s embrace of Yanikian’s brutal act set the stage for a dozen more years of terrorism.

The terror campaign of Armenian organizations worldwide continued until 1995 with a total of 239 acts of terror carried out in 38 cities and 21 countries. Of the 239 terrorist attacks, 71 were conducted by Armenian Americans, and 30 occurred on American soil. According to the FBI, between 1980-1986, Armenian terrorism accounted for the second highest number of terrorist incidents in the United States. 70 people, mainly Turkish diplomats and their family members, were murdered, over 500 were wounded in these attacks. The Armenian terrorist bombing campaign caused 160 incidents of property destruction, totaling several hundred million dollars in property damage in the United States, Europe, Middle East and Australia.

A shocking connection between Armenian American leaders and the terror groups was unraveled in 1999, when Mourad Topalian, the then chairman of the Armenian National Committee of America (ANCA), was indicted by a grand jury in Ohio on charges of participating in the October 10, 1980 bombing of the Turkish Mission in New York. Topalian was sentenced in 2001 to 37 months in prison for storing stolen explosives near a child care center and owning illegal machine guns. When the federal charges were filed, Topalian resigned from his post at the ANCA, but continued to receive support from Armenian Americans nationwide for his legal defense fund. He is now an active ANCA member, though without a title. He has since moved to southern California and has been absorbed into the local Armenian community. Topalian continues to attend meetings with the members of local government and appears to have no shame or remorse over his criminal past.

On December 14, 2016, the California Board of Parole Hearings offered parole to Hampig Sassounian. However, on May 12, 2017, in response to an education campaign carried out by the Turkish American community and the Turkish government, California Governor Jerry Brown reversed the parole decision citing the continued risk to public safety posed by Sassounian. Sassounian remains in prison in San Quentin, CA.