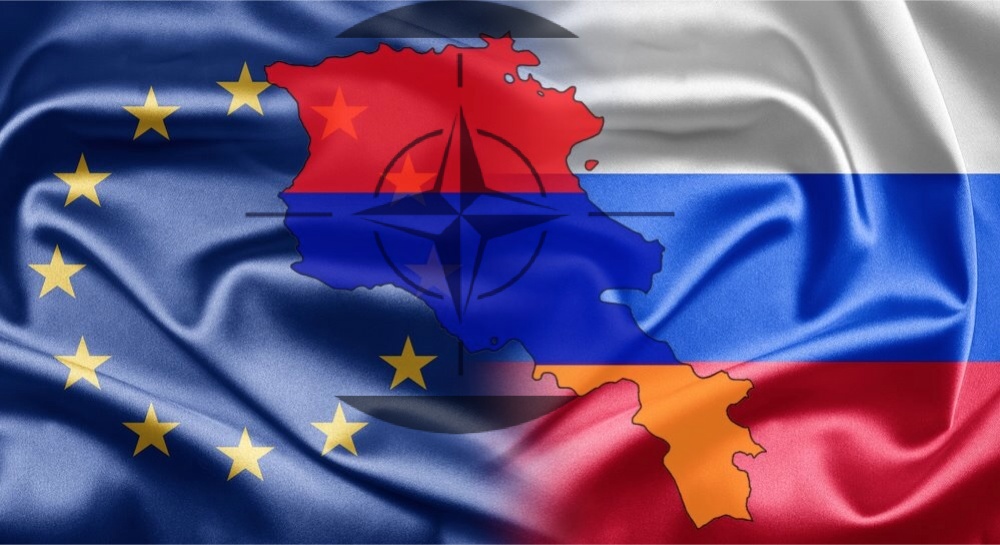 The "April Revolution" in Armenia which took place in April still continues to be relevant due to its outcomes. Nikol Pashinyan’s administration, which came to power after the revolution, seems to be repositioning itself in the international area on one hand while trying to deal with old regime on the other hand. Despite the statements often made by Pashinian that “the classical foreign policy of Armenia will be maintained,” it can be noticed that he wishes to establish good relations with the West.

As it is known, Pashinian was very-well known with his anti-Russian ideas in the years he spent in the opposition before coming to power. Pashinian, who frequently criticized the Sargsyan administration for being pro-Russian, did not display a keen attitude towards Russia during and after the April Revolution. He even expressed his support to move the friendship and cooperation between the two countries to the next step. These statements of Pashinian also indicate his efforts to establish balance of power.

Russia's attitude, which continued its close relations with Armenia after the dissolution of the Soviet Union, seemed consistent with Pashinian’s statements. Pashinian met with Putin on May 14th and the strength of the relations between Armenia and Russia was pointed out once again.[1] The future of the relations between the two countries during the Pashinian administration is still closely followed by many actors. In this context, it is necessary to evaluate the last 4 months of Armenia-Russia relations.

Pashinian made a statement shortly after his election as prime minister that he wanted to deepen relations with the European Union and Russia.[2] The EU stated that Armenia would be actively supported in the elections to be held and in corruption investigations.[3] The developments between Armenia and the West were closely followed by Russian leaders. It is noteworthy that Russia, who reacted harshly to the revolutions in Ukraine and Georgia, follows a more cautious policy against the process in Armenia.

On the other hand, one of the main issues that forms the dynamics of the Russia-Armenia relations is the Nagorno-Karabakh conflict. During this period when Armenia entered into rapproachment with the West, a delegation composed of Russian political scientist Aleksandr Dugin, who is also one of the Putin’s advisors, and Russia's prominent politicians went to Azerbaijan.[4] They attended a conference titled “Russia’s Only Ally in the South Caucasus.” Dugin called for the end of the illegal occupation of Nagorno-Karabakh by Armenia at the conference. He said that Nagorno-Karabakh is the land of Azerbaijan, and that this opinion is also shared by the President of Russia. The Russian Foreign Ministry spokeswoman Maria Zakharova said during her visit to Azerbaijan on July 31st that Dugin's statements did not express the official standing of Russian Foreign Ministry.[5] Nonetheless, it is noteworthy that those statements were made during a critical period for the bilateral relations.

With Pashinian's decision to participate in the NATO summit to be held on July 11-12, the opinions that there is a fracture in the foreign policy of Armenia have begun to be expressed.[6] Pashinian stated that he expects more assistance from the EU and NATO officials during his visit to Brussels. He stated that they carried out successful operations with NATO as partners in Afghanistan and Kosovo. He also added that “Armenia is a democratic state that contributes to the international peace”.[7] He expressed his opinion during his interview with Euronews on July 12th that NATO might give a powerful message to resolve the Nagorno-Karabakh conflict. Also he accused Azerbaijan of not abiding by the international decisions and the peace process. He considered the Nagorno-Karabakh issue as a struggle between "authoritarianism and democracy" and stressed that Armenia is a western country.[8]

A paragraph that stated “support for the territorial integrity of South Caucasus states”[9] in the final resolution of NATO summit was exactly the opposite of Armenia’s expectations. Pashinian, who desired to deepen his relations with the West through NATO, did not attain the expected results. The claim that Armenia is a country that contributes to international peace has once again been unfounded through the final resolution of NATO.

On the other hand, Russian troops carried out a military exercise in the Panik village of the Gyumri town of Armenia on July 17th, shortly after the visit of Pashinian to Brussels.[10] As it is known, the 102nd Russian Military Base is located in this village. This exercise, which the Russian army conducted without informing the Armenian officials, caused uneasiness that led to panic among the locals. After the exercise, the 102nd Base Commanders visited the Armenian officials and told them that they would investigate this event and then inform the public by organizing a press conference.[11] The timing of this exercise and the fact that such an incident had not been experienced from the deployment of the base in Armenia except for the events in 2015 is noteworthy. It is once again seen that Russia is an actor that should not be excluded after Armenia's moves on NATO and the West. As a matter of fact, Pashinian's statement about the presence of the Russian base in Armenia after this exercise confirms this view. Pashinian stated that the 102nd Russian Military Base plays a very important role in the security of Armenia and they are grateful to them.[12]

Another tension between Russia and Armenia has been rising in CSTO which is a security organization like NATO. CSTO secretary Yuri Khachaturov has been accused in the context of the ongoing corruption operations in Armenia. Armenia stated that Khachaturov might be dismissed from his duty.[13] Following this situation that lead to tension with the Russian offices, Russian Foreign Minister Sergei Lavrov said that they were following the developments in Armenia with concern. According to Russian experts, Lavrov’s reaction is one of the most important indicators of tension in the bilateral relations.[14]

While these developments were occuring within CSTO, Armenia has taken a low level of participation decision in the Noble exercise NATO has organized in Georgia.[15] Armenia, which had withdrawn its decision of participating in the exercise with the same name in 2017 at the last minute[16], attended the exercise this year and once again showed the importance it attaches to NATO partnership.

All these developments show that Armenia is working on real-politik that balances Russia and the West. Armenia, which does not want to feel a possible Russian pressure, develops rhetoric that is not anti-Russian while trying to approach the West through NATO and the EU. The effects of this axis shift in Armenian foreign policy seems like it will cause significant consequences for the countries in the South Caucasus. These developments, which can affect the attitude of Russia in particular to the Nagorno-Karabakh problem, should be followed closely.

[16] “Why did Armenia drop out of NATO exercises at last minute,” Vestnik Kavkaza, September 06, 2017. http://vestnikkavkaza.net/analysis/Why-did-Armenia-drop-out-of-NATO-exercises-at-last-minute.html.