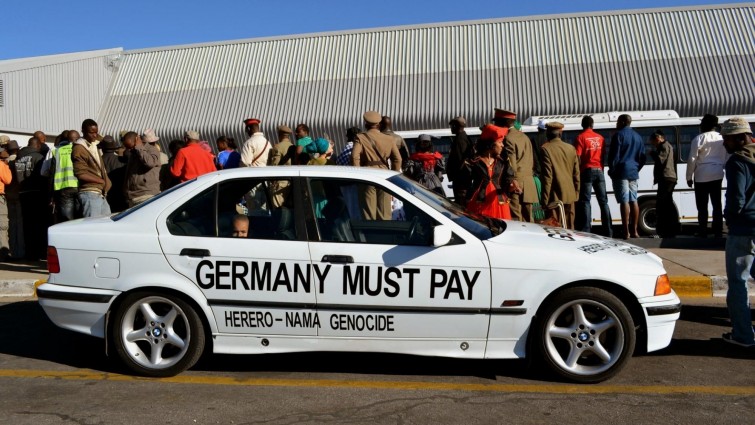 There has been news that Germany and Namibia have discreetly organized a meeting in Berlin at the end of September regarding the 1904-1908 Herero and Nama genocide accusation made against Germany. The conduct Germany has displayed during the negotiation process it has been conducting with Namibia clearly shows the double standard it has been using in the genocide debates for the sake of its own interests. We have a previously published an article on this subject,[1] but it will be useful to touch upon this subject again.

The international reaction to the Holocaust carried out by Germany against the Jews during World War Two became the main foundation for the signing of the 1948 United Nations Convention on the Prevention and Punishment of the Crime of Genocide. However, many years before Germany carried out the Holocaust, which is universally classified as a genocide, it perpetrated another systematic extermination campaign. Between the years 1904-1908, in the lands belonging to today’s Namibia, an extermination order (Ger. Vernichtungsbefehl)[2] was issued against the Herero and Nama tribes that had rebelled against the German colonial administration. Accordingly, these tribes were subjected to a systematic extermination campaign.

Oddly, except for one source,[4] there was almost no mention of this meeting in the German media. The said single source explained that the German government did not want to make any statements regarding this negotiation process to the public. To the German government’s discontent, information on the meeting was shared with the public by the Namibian delegation.[5]

For Germany, who is deeply ashamed of the Holocaust, the genocide accusation from Namibia is very disturbing. This is so because Germany’s history is already stained by genocide, and it is now in danger of being stained once again by Namibia’s accusation. Beyond the shame aspect, the amount of reparation demanded is also worrying Germany. The amount demanded is stated to be 400 billion Namibia Dollars (25 billion Euros or 30 billion US Dollars).[6] For these reasons, Germany is trying to keep the issue as hidden as possible, carrying out meetings with Namibia without informing the outside world, and aiming to end these accusations by giving very significant developmental aid to Namibia (instead of paying reparations). Thus, Germany is the country that has provided the most amount of developmental aid to Namibia and has supplied aid worth 800 million Euros up until now.[7] Recently in September, the Namibian press has stated that Germany will provide aid worth 133,5 million Euros to Namibia as a part of “technical and financial cooperation projects and programs.”[8]

However, putting all these developmental aids aside, the conduct exhibited by Germany regarding the genocide accusation is causing to the negotiations between the two countries to bear no results. Germany states that calling the 1904-1908 events a genocide will only have a political quality and that such a move would not be legally binding since the 1948 Genocide Convention cannot be applied retrospectively. In this framework, Germany states that it is not possible for it to officially recognize these events as a genocide and accordingly pay reparations.[9] Even though Namibia had sent its negotiation position paper regarding recognition, apology, and reparation to Germany on July 2016, Germany has only confirmed that it has received this document and has not replied regarding the document’s actual content.[10] Namibia, meanwhile, has stated that the people of Namibia will not accept any agreement without recognition, apology, and reparation.[11]

While the Namibian government is addressing the situation with a diplomatic language, the Nama and Herero tribe representatives are using a sterner tone. Zed Ngavirue, the Namibian government’s special envoy at the negotiations, has stated that the latest meeting with Germany had passed smoothly but that no outcome had been achieved. Replying to the question "Has any progress been made?", Ngavirue stated that “Nothing is agreed until everything is agreed.”[12]

Meanwhile, the Nama and Herero tribe representatives have blamed Germany for grinding the negotiations to halt due to its conduct.[13] The tribe representatives have also stated that they are not being fairly represented in the negotiation process[14] (probably due to Germany’s interventions) and that they may demand reparations from Germany separately if they see fit.[15] Nonetheless, Prime Minister of Namibia Saara Kuugongelwa-Amadhila has stated, in order to address such concerns, that the public will be informed after the negotiations are concluded and that the people of Namibia will be consulted regarding how the reparations demanded will be distributed.[16]

As can be understood from the above, Germany, due to its conduct, is hampering the negotiation process with Namibia. In this framework, Germany should answer some questions regarding its said conduct (similar questions have been asked in our previous article):

2) How is it that while Germany -as a country with its politicians, academics, and institutions- is insistent on calling the 1915 Events a genocide and accordingly disregarding historical facts and international law, points to the law to defend itself when the 1904-1908 Events are in question? Why is Germany acting as if it recalls the principals of law only when its own interests are in question?

3) Why has the German media, which has published on the 1915 Events due to these events being used as political material in Germany, not published the meeting between Germany and Namibia at the end of September? Why is the German public not interested in the systematic extermination campaign that the German colonial administration perpetrated against the Nama and Herero tribes during the beginning of the 20th century? Is Germany, as a country, aware of its contradictory conduct? In such a case, how logical is it for Germany to attempt to position itself on the moral high ground and to counsel Turkey on "historical justice"?

As mentioned in our previous article; “Germany will use its influence to twist and turn the strictly defined legal term ‘genocide’ according to its interests,” and seeks to “come to an agreement with Namibia that will foremost protect Germany’s interests while sidelining the Herero and the Nama tribes.”[18] The conduct Germany has displayed in the Namibia-Germany negotiations reveals that Germany is trying to buy time, and is trying to force Namibia to come to an agreement that will disregard the interests of Namibia’s own people and only suit Germany’s interests. We will continue to follow Germany’s contradictory actions in the negotiation process through a critical lens.

[2] “Policy of Mass Killings in the Early 20th Century in Colonial Africa: The Case of the Genocide in Namibia and the Lessons Learned – Lecture Delivered by Prof. Joseph B. Diescho at Middle East Technical University and AVİM in May 2015,” (Center for Eurasian Studies (AVİM), AVİM Conference Book No. 16, May 2015), 12, http://avim.org.tr/images/uploads/Rapor/AVIM-Conference-Book-16.pdf

[10] Ndanki Kahiurika, “Public to decide what to do with genocide reparations,” The Namibian, September 25, 2017, https://www.namibian.com.na/59581/read/Public-to-decide-what-to-do-with-genocide-reparations

[12] Kahiurika, “Talks smooth but no agreement…”

[15] Kahiurika, “Talks smooth but no agreement…”