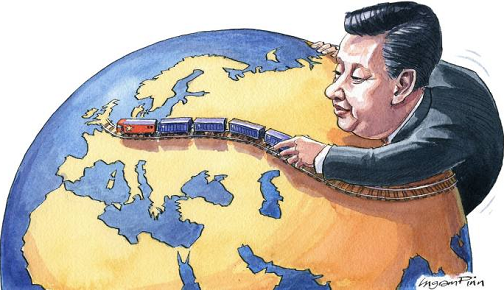 From the 1990s onwards, China began to develop infrastructure connections and economic and commercial relations with the newly independent Central Asian countries after the dissolution of the Soviet Union. Besides the importance for the security of China, which borders three of the five Central Asian countries, the energy and mineral resources of the region and the new markets in Central Asia has been the focus of China’s interest.

China, which transitioned to a market economy with the "reform and opening up" in 1978, started to implement a development plan based on the coastal regions of the east of China. Meanwhile, after the independence of the Central Asian states, for the security of her western regions, China began to develop cooperation mechanisms with the three Central Asian countries (Kyrgyzstan, Kazakhstan, Tajikistan) - bordering with China and having historical links with Xinjiang Uyghur Autonomous Region-  and Russia under the umbrella of the Shanghai Five (later, with the inclusion of Uzbekistan, it became the Shanghai Cooperation Organization). In addition to this, China also put forward an economic plan for the development of her western regions with the cooperation with Central Asian states in the field of commercial relations and infrastructure development. For this reason, China's commercial expansion to Central Asia has been called "double opening up".[1] The Xinjiang Uyghur Autonomous Region has served as a bridge in this initiative. For example, the Urumqi Border Zone Economy and Trade Fair, held since 1992, has been the largest trade fair in the west of China for many years.[2] With the Belt and Road Initiative announced by Xi Jinping in Kazakhstan in 2013, China has expanded the scope of the western development project launched in the 90s. The infrastructure projects and investments that China has developed in Central Asia (first with the Western Development Plan and later with the Belt and Road Initiative) have contributed to the development of commercial relations between China and Central Asian countries and has contributed to China to become a major actor in Central Asian trade now.

On the other hand, China increased its natural gas exports with her plan to reduce the weight of coal in total energy consumption. With this increasing demand from China, 15% of the natural gas consumed by China in 2019 was imported from Turkmenistan, Uzbekistan, and Kazakhstan.[3] With the launch of the Central Asia-China Natural Gas Pipeline in 2009 -which starts in Turkmenistan in 2009 and reaches China after Uzbekistan and Kazakhstan- China's influence on the Central Asian energy market has increased. In response to this dominant role in China's trade in Turkmenistan, Russia eventually took action to increase its effectiveness and a 5-year gas purchase agreement was signed between Russia’s Gazprom and Turkmenistan in 2019.[4]

Compared to Turkmenistan, there are more countries and product diversity in Kazakhstan's exports in 2019. Oil and natural gas come first in the products of Kazakhstan's total exports of 58 billion USD in 2019.  While Italy -to which Kazakhstan exported 8.2 billion USD in oil-  takes the first place in the exports of Kazakhstan, China takes the second place. While petroleum and natural gas products come first in Kazakhstan's 7.8 billion USD export to China, copper and copper-derived wares, precious-metal ores, iron and steel, zinc and zinc-derived wares, radioactive chemical elements such as uranium also have an important share.

Although less than Turkmenistan and Kazakhstan, which make up the majority of the total trade volume in Central Asia, Uzbekistan is also a natural gas exporter country. When we look at the trade table of 2019, it is seen that the buyer of the gas exported by Uzbekistan is mostly China. In 2019, Uzbekistan realized 1.1 billion USD of its total natural gas exports (1.3 billion USD) with China. Apart from that, cotton, copper and copper-derived wares are in the first place among the products exported to China. While China is the number one country in the export of Uzbekistan, Russia is number two.

Uzbekistan is the country with the largest population (33 million) among Central Asian countries, Uzbekistan is considered an important market for the export of Chinese goods. China ranks first in Uzbekistan's 2019 imports with 3.5 billion USD. In addition, the change of government in Uzbekistan after 2016 and subsequent reforms has made Uzbekistan attractive for investors. Although China is not ranked first in the trade target of Uzbekistan for 2020 due to Covid-19,[5] it is considered that China being the first in foreign direct investments[6] and creation of important infrastructure projects will expand the trade volume between China-Uzbekistan in the coming years.

The top countries to where Kyrgyzstan exported to most in 2019 (out of a total of nearly 2 billion USD) were respectively: the United Kingdom, Kazakhstan, Russia, Uzbekistan, Turkey, and China. Precious metals, especially gold, have the largest economic share in the export of Kyrgyzstan. While the precious metal ores, tobacco, and mineral materials are the primary exports of Kyrgyzstan to China, total exports to China amounted to 81 million USD in 2019. However, in Kyrgyzstan's imports of 4.9 billion USD from the world in 2019, China ranks first with 1.7 billion USD. The gap between the figures of Kyrgyzstan's imports from China and exports to China draws attention.

What is also important is that Kyrgyzstan's state debt to China is 1.8 billion USD and Kyrgyzstan is now the fifth country that owes the most to China in the world (measured in terms of GDP).[7] It should be noted at this point that while China is creating infrastructure projects within the framework of the Belt and Road and opening new markets, China's credit loans raise concerns about “debt trap diplomacy” and cause protests in Central Asian countries.

China ranked third, after Turkey and Russia, in Turkmenistan's 2019 imports with 431 million USD and in the imports of Kazakhstan, China ranked second after Russia with 6.5 billion USD.  It is seen that machinery with high added value, mechanical appliances, and equipment and their related parts and accessories come first in all Central Asian countries’ import from China. Furthermore, textile products produced by China, who imports raw materials such as cotton from Central Asia and processes these raw materials, ranks first in the imports of Central Asian countries.