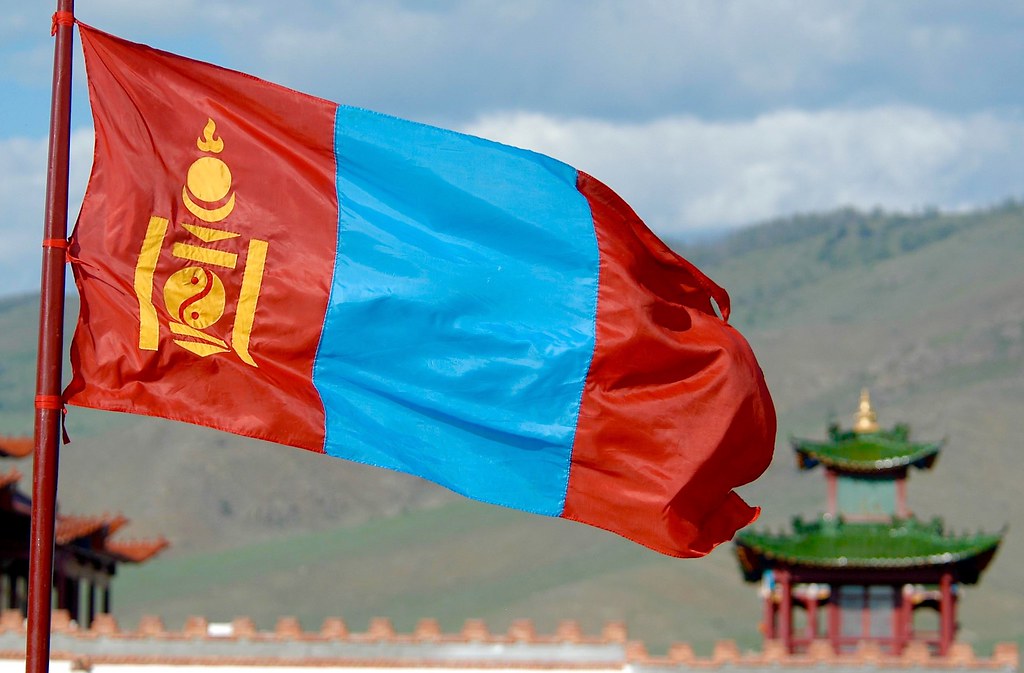 Mongolia has adopted the goal of pursuing an independent foreign policy and cultivating multilateral relations since the 1990s. However, Mongolia, as a landlocked country surrounded by two great powers (China and Russia), has limited options due to its geographical location. Mongolia, which aims to develop relations and cooperation with countries other than Russia and China in its foreign policy with the third neighbor concept, faces some difficulties.

While most of the Mongolian tribes in Inner Mongolia surrendered to the Qing Empire in 1636, today's Mongolia came under Qing rule in 1691. After the fall of the Qing Empire in 1911, Mongolia declared its independence, and the Mongolian People's Republic was established as a socialist state in 1924. Mongolia's independence was accepted by China at the Yalta Conference in 1945, and Mongolia became a state in the eastern bloc supported by the Soviet Union.

In the Soviet Union, concerning foreign policy, Mikhail Gorbachev, instead of putting forward the concept of class struggle in international relations, put forward a new political thought in line with the ideas of not acting ideologically and making a priority of the universal interests of humanity. In line with this, in Mongolia, which had the opportunity to act relatively freely in its foreign policy, the first normalization of relations with many capitalist countries was allowed at the 19th congress of the Mongolian People's Party in 1986.[1] Thus, the first step was taken in Mongolia's history to cooperate with third countries other than China and Russia.

In 1990, the Democratic Revolution took place in Mongolia and the first multi-party elections were held. A new constitution was adopted in 1992 and the country transitioned to a free market economy. Mongolia, which was in search of a new security strategy and identity after the collapse of the Soviet Union's sphere of security, first revealed its foreign policy goals and national defense agenda in 1994 with three basic documents. These were the National Security Concept adopted by the National Security Council, the Foreign Policy Concept adopted by the parliament, and the military doctrine. In these documents, maintaining good relations with China and Russia was defined as the highest foreign policy priority of the state.[2] In addition, with the concept of “third neighbor”, Mongolia has set its goal of bilateral and multilateral cooperation beyond its neighbors of Russia and China in political, economic, cultural, and humanitarian relations with countries that have developed democracies.

A working group was established in Mongolia, which decided to renew the National Security Concept in 2009. The National Security Concept, renewed in 2010, is an organic continuation of the 1994 Concept, while revealing the same principles, also reflects the emergence of global economic difficulties and unconventional new threats.[3] Thus, the necessity of comprehensive coordination in various fields including economic security, internal security, human security, environmental security, and information security[4] has been put forward.

In line with the 2010 security concept of Mongolia, the prominent goals in the new foreign policy concept adopted by the parliament in 2011 with the “Resolution 10” are as follows:

To expand bilateral relations with Asian countries, increase involvement in the Asia-Pacific regional cooperation, and support the regional peace and security by involving in security related events in the Far East, East Asia, and Southeast Asia.”[5]

In addition, in the new National Security Concept, the goal of economic diversification has been put forward to prevent the dependence of the economy on a single sector, in this case, mining. In terms of foreign investments, it was decided that no country should exceed one third of the total investments in the country.[6]

Here, the fact that finding a balance between China and Russia as expressed in the concept of foreign policy is important. It is thought that these goals and the decisions taken are primarily due to Mongolia's concerns about China as a security issue. More than fifty percent of foreign investments in Mongolia are held by China.[7] In addition, Mongolia's dependence on China stands out in its import and export. In 2018, Mongolia realized 6.3 billion dollars of its total exports (approximately 7 billion dollars) to China. The main products in Mongolia's export to China are coal; briquettes, ovoids, and similar solid fuels derived from coal.[8] China's imposition of sanctions against North Korea's nuclear test activities in 2017, and as a result of this, the increase in coal exports from Mongolia instead of coal exports from North Korea resulted in an increase in the weight of China in the mining sector of Mongolia.[9] Other mineral products (foremost being copper ores), come second in China's imports from Mongolia.[10]

Reasons such as the dependence of Mongolia's economy on mineral exports to China, the increase in the number of legal and illegal Chinese migrant workers in Mongolia, and Mongolia borrowing from China have increased the concerns about China in terms of the economic security of Mongolia.[11] As a matter of fact, the current President, Khaltmaagiin Battulga, conducted a campaign with anti-China rhetoric before the elections in 2017, and also stated that "Our wealth is shipped outside of the country" and that the Mongolians should own the strategic mines in the country. These discourses contributed to the support given the people to Battulga along the way that brought him to power.[12]

However, it is thought that Battulga's anti-China stance cannot go beyond a populist rhetoric. Indeed, in response to the exiled spiritual leader of Tibet's Dalai Lama's visit to Mongolia, China firstly cancelling meetings with high-level Mongolian officials, then imposing fees on commodity imports from Mongolia, and demanding additional transit costs for goods crossing the border into Mongolia, and the Mongolian government subsequently declaring that the Dalai Lama would not be invited again demonstrates the vulnerability of Mongolia to China’s pressure.[13] This situation also shows that it is difficult for Mongolia to take a stand by itself against China's assimilationist policies[14] in the Inner Mongolia Autonomous Region.

Mongolia is taking steps to expand its trade and investment partnerships with Russia in an effort to strengthen its ties with Russia as a balance against China. In addition, an agreement of “Friendship and Comprehensive Strategic Partnership” was signed between Russia and Mongolia last year. A significant part of Mongolia's oil and electricity resources are imported from Russia.[15] However, despite all these, Russia is currently in a less active position in Mongolia than China. Moreover, the rapprochement between Russia and China against the West in foreign policy makes it less likely for Mongolia to find support from Russia to balance its relations with China.

Mongolia has continued its efforts in line with its third neighbor policy to develop relations beyond Russia and China. In multinational peacekeeping operations, Mongolia conducted military exercises with the US under the name of Khanquest and this was expanded into a multinational exercise in 2006.[16] However, it should be noted that Russia and China also participated in these exercises as observers.[17] Mongolia also sent troops to the United States' Iraq operations in 2003 and kept its soldiers in support of coalition operations in Afghanistan.[18] These are all signs of Mongolia's efforts to develop relations with the US. The then US Secretary of State John Kerry also emphasized Mongolia’s geographical position, defined it as an "oasis of democracy", and stated that closer relations should be developed between the two countries. However, relations between the US or Western Europe and Mongolia are rather limited. The agreement regarding the export of Mongolian wool and cashmere to the US without taxation became void because it did not receive the approval of the US Congress. Mongolian national security expert Mashbat Otgonbayar states that the third neighbor policy could not be sustained due to insufficient attention from the US and western countries.[19]

One of the collective third neighboring countries declared by Mongolia is Turkey. Diplomatic relations between Turkey and Mongolia were established on 24 June 1969. The Turkish Embassy was opened in Ulaanbaatar in 1996, while the Mongolian Embassy in Ankara was established in 1997. Since the 1990s, many bilateral agreements were signed between Mongolia and Turkey. Due to the fact that Mongolia is home of the Orkhon monuments, the oldest known Turkish inscription in the history, and Turkish-Mongolian relations based on the centuries, Turkey attaches importance to its relations with Mongolia. As for Mongolia, it is seen that especially young population of country has a special interest in Turkey. As Mongolia's Ambassador to Ankara Bold Radvan stated, in the years between 1999 and 2018, almost two thousand Mongolians graduated from Turkey's higher education institutions. In addition to diplomatic, defense and security cooperation, information and human resources exchange is actively carried out between the two countries.[20] Turkey, having sent masks and other medical equipment to Mongolia during the course of the pandemic, also conducts soft power diplomacy activities with the projects such as the construction of vegetable depots  via  Turkish Cooperation and Coordination Agency  (TİKA). It is seen that Turkish-Mongolian commercial relations are still in the process of development, but the opportunities that the Mongolian market can offer to Turkish companies for trade and investment attract attention.

The most important factor that emerges in Mongolia's search for balance is the economy. At this point, Mongolia needs to increase its international visibility and, in addition to Mongolia's efforts, "third neighbors" must also take concrete steps to develop relations with the country.