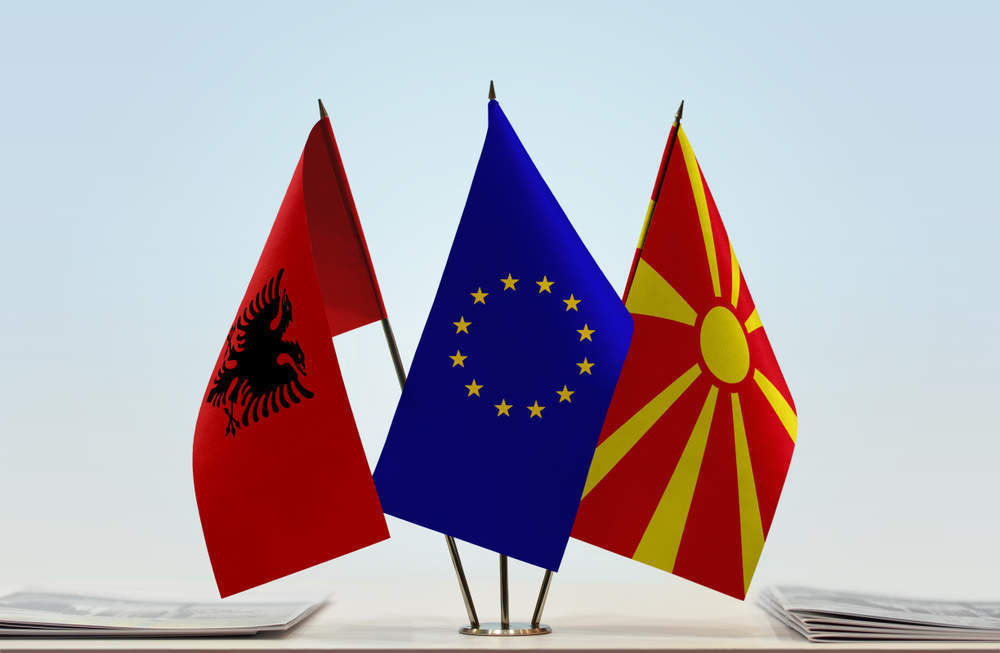 In many previous Center for Eurasian Studies (AVİM) analyses and commentaries, we provided information on the enlargement process of European Union (EU) in the Balkans and stressed the importance of integration of Balkan countries to the Euro-Atlantic organizations. In this context, we referred to the strategy adopted by the European (Union) Commission in February 2018 under the title of “A Credible Enlargement Perspective For An Enhanced EU Engagement With The Western Balkans.”[1] This strategy considers the enlargement policy as “part and parcel” of the larger strategy to strengthen the EU by 2025. It presents an enlargement package and recommends that the European (Union) Council opens accession negotiations with certain “Western Balkans” countries.

However, it will be recalled that President of France Emmanuel Macron last year refused EU enlargement in the "Western Balkans" until the EU is reformed and thus blocked membership talks for North Macedonia and Albania during the European Council meeting held in October 2019. This blockage by Macron was described by then outgoing European Commission President Jean-Claude Juncker as a "historic error". Additionally, former European Council President Donald Tusk has said that he was "really ashamed" of the situation.[2]

Nowadays, while the world is putting enormous effort to bring the novel Coronovirus (SARS-CoV-2) pandemic under control and limit the deaths in the EU countries, good news have come from the EU that the Union has reached political agreement on 24 March 2020 and has decided to initiate accession negotiations with Albania and North Macedonia[3] On 25 March, the conclusions on enlargement, stabilization, and association process were formally adopted by written procedure. Finally, on 26 March 2020, the European Council endorsed the conclusions.[4]

This decision shows us that President Macron, along with some other heads of state and government of EU member states, have abandoned their long-time opposition to start accession negotiations with certain Balkan countries. In the past, it had been reported that along with France, the Netherlands had some reservations concerning the accession talks with Albania because of “its poor record in fighting organized crime and corruption”.[5] Similar hesitations were attributed also to Denmark, which is said to have previously objected to talks with Albania.[6]

We understand from the latest news reports that Greece, which had for years prevented EU accession talks with Macedonia because of the name issue has also problems with Albania. As it is known, Greece, having historically behaved as the spoiled child of Europe along with the Greek Administration of Southern Cyprus, pressured Macedonia to change its name from “Macedonia” to “North Macedonia” and eventually succeeded. As per a news item contained in a European media network specialized in EU policies, Greece used the same tactic for Albania, and according to diplomatic sources, introduced last minute changes to the agreed documents in EU and “demanded guarantees for the protection of its national minority in Albania”.[7] It is also reported in one of a European prominent newspaper that:

“Last week, Greece still did not support the decision, which requires unanimity of EU members, but diplomatic sources said Athens had given its approval after the latest draft included stronger language on protecting Greek and other national minorities in Albania.”[8]

In fact, the European Council conclusions on Enlargement and Stabilization and Association Process on the Republic of North Macedonia and the Republic of Albania, adopted by the Council by written procedure on 25 March 2020, in its Article 2 states that “The Council also notes the importance of human rights and of respecting the rights of persons belonging to minorities.” Also, in its Article 10 concerning the accession negotiations with Albania, the Conclusions state the following:

“The negotiating framework will be adopted by the Council and has to reflect that Albania has successfully addressed all five key priorities such as… further progress in the adoption of the remaining implementing legislation related to the 2017 framework law on the protection of national minorities, the adoption of the law on the population census in accordance with the Council of Europe recommendations, and the advancement of the process of registration of properties.”[9]

It is worth mentioning in this context that Greece, while advocating the rights of the Greek minority in Albania, has  constantly ignored  the basic human rights of Cham  Albanians,  a predominantly  Muslim  sub-group  of  Albanians  who  originally  resided  in  the coastal  region  of  Southern  Epirus  in Greece’s  border  region  with  Albania.[10] It should be briefly stressed that the Convention Concerning  the  Exchange  of  Greek  and  Turkish  Populations of 1923[11]   governed  the  exchange  of  Muslim residents  in  Greece  with  Orthodox  residents  in  Turkey,  except  the  Greek Orthodox residents  of  Istanbul  and the Muslims living  in  Western  Thrace, mainly  including Turks. However, as it is mentioned in an academic source, “extra-conventionally, 24.000 ‘Muslims of Albanian origin’ in Greece [were] exempted from the population exchange… After long negotiations in the Lausanne Conference, the Mixed Commission decided on March 14,1924 to exempt from the exchange the Albanian Muslims of Albanian origin of Greece following the relative proposal of Albania and Greece.”[12]

In a recent “policy brief” published under the title of “The Power Of Perspective: Why EU Membership Still Matters İn The Western Balkans”, it is stated that “Albania and Greece are still technically at war with each other” due to the Cham Albanian dispute. Relevant parts of the said “policy brief” are quoted here below for better understanding of the real  nature of the controvery:

“Albania and Greece are still technically at war with each other, owing to a second world war legal decree which Greece has not annulled. The two countries signed a friendship treaty in the early 1990s, and more recently in 2016 when their foreign ministers agreed to end the formal state of war. However, Greece has still not adopted the necessary legal changes. The Albanian position is that the Greek government is reluctant to nullify the decree as it prevents the Cham Albanians from claiming back the property they lost in Greece during and after the war.

Around 30,000 Albanians were expelled from Greece in 1944 following the accusation that they were collaborating with the Nazi occupiers. This is a priority issue for Albanian diplomacy, but Greece has until now refused even to recognise it as an issue. Some argue that the issue of Cham Albanian property and the war decree are unconnected, maintaining that the Cham Albanians would be unable to claim back property in Greece anyway.During bilateral talks, Albania has long sought to argue that the right for Cham Albanians to commemorate their deceased relatives should be granted, as they are not allowed to enter Greece. Albania frames the issues facing the Cham Albanians as a human rights matter.”[13]

Time will show how the accession negotiations will influence Greece's longstanding intransigent stance on this issue.

At this juncture, It is also worth noting the double standards that Greece exhibits on a number of other issues. In this context, the pressure that Greece has been appliying on the Muslim Turkish minority in Western Thrace is well known. Minority associations in Komotini and Xanthi in Western Thrace have been kept closed for years just because they have the word "Turkish" in their names. Greece denies the ethnic identity of the Turkish minority of Western Thrace on the grounds that the Lausanne Peace Treaty refers to “Muslim minority”. However, convention and protocol signed between Turkey and Greece on the exchange of Turkish and Greek Populations of 1923 refer explicitly to Turks and Greeks. Moreover, the "établis" (those who have not been subject to the population exchange) document given to the members of the Turkish and Greek minority respectively in Greece and Turkey by the Turkish-Greek Joint Commission, which states that they are "établis", also explicitly refers to Turks and Greeks, not Muslims and non-Muslims [14]. In addition, difficulties are created to members of this minority in granting even their simplest citizenship rights and they face discriminatory treatment in almost every walk of life.

The knowlegable diplomatic sources on Greece draw attention also to the point that the Greek minority in Albania has broad rights. It is said in this regard  that this minority acts as if it has an autonomous structure. Education in their schools and worship in their churches are carried out with great freedom, and Greek flags are waved freely in minority regions. However, when a Turkish flag is displayed at Western Thrace, it is a constant fact that the police intervention is made immediately.

It is a known fact that Cham Muslims are deprived of the simplest human rights, let alone reinstate their property rights in Greece. As a matter of fact, as it was mentioned above, Cham Albanians were not given permission to enter Greece even for visiting their ancestral tombs. This is a typical example for human rights violations.

In addition to these unlawful procedures, the fact that Greece has been an EU member since 1981 poses a great contradiction. What is expected from Greece now is to end such violations of rights, and to quickly return to the behavior that befits an EU member. In this context, the first step will undoubtedly be the return of the Cham Muslims' property in Greece and other assets to them.

It is important that the EU has come to an agreement on the enlargement process in the Balkans despite such a distressing global pandemic environment.

[1] In nearly all of our AVİM analyses on EU enlargement in Balkans, we drew the attention to the historic and geographic integrity of the Balkans and expressed our disapproval of the term “Western Balkans”. It is our view that the term “Western Balkans”, which was developed by the EU in the context of its expansion in the Balkans, leads to the artificial division of the Balkans, overlooks the historical realities, and undermines its integrity. AVİM maintains its opinion on this matter.

[9] “Enlargement And Stabilisation And Association Process the Republic of North Macedonia and the Republic of Albania Council Conclusions” (Council of the European Union, March 25, 2020), ELARG 20 COWEB 35, https://data.consilium.europa.eu/doc/document/ST-7002-2020-INIT/en/pdf.

[10] Abdullah Sencer Gözübenli and Halim Çavuşoğlu, “Treaty Of Lausanne: The Tool Of Mınorıty Protectıon For The Cham Albanıans Of Greece,” PEOPLE: International Journal of Social Sciences 4, no. 3 (2018): 474–81.

[11] “Treaty with Turkey and Other Instruments Signed at Lausanne” (Republic of Turkey Ministry of Foreign Afairs, July 24, 1923), http://www.mfa.gov.tr/treaty-with-turkey-and-other-instruments-signed-at-lausanne.en.mfa.

[14] “Turkish Minority of Western Thrace and the Turkish Community in the Dodecanese” (Republic of Turkey Ministry of Foreign Affairs, 2011), http://www.mfa.gov.tr/turkish-minority-of-western-thrace.en.mfa.