A QUARTER OF A CENTURY OF INDEPENDENCE OF CENTRAL ASIAN AND SOUTH CAUCASUS COUNTRIES: AN ECONOMIC SNAPSHOT AND PROSPECTS FOR THE FUTURE
Analysis No : 2016 / 10
Author : Teoman Ertuğrul TULUN
14.12.2016
10 min read 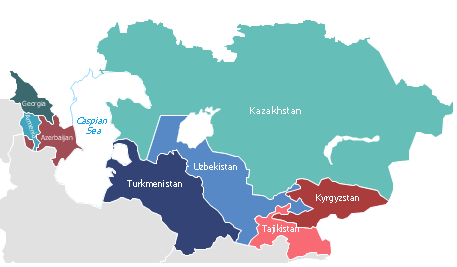 As the countries of Central Asia and South Caucasus celebrate the 25th anniversary of their independence, both regions are defined by two important factors. The first factor is that the need for structural reforms have become an issue of critical importance in a time when these countries are facing complex headwinds. Against the backdrop of adverse global developments, all countries in the region are trying to develop and implement anti-crisis programs in order not only to grapple with the current difficulties of economic stagnation, but also for sowing the seeds for future economic growth. The second factor is that countries in both regions, but especially the countries in Central Asia, are trying to be integrated more thoroughly into the larger global trade markets.

Most of Central Asia’s current economic problems originate from the falling price of critically important commodities of oil and natural gas. Recent data point to continued weakness across much of the region, as low oil prices put on pressure on exporters like Kazakhstan and Azerbaijan (the recent hike of oil prices by OPEC has not sufficiently impacted oil prices to make difference in terms of the regional countries). For example, in Kazakhstan, growth decreased to 1.2 percent in 2015 from 4.1 percent in 2014 as the economy adjusted to the decline in the price of oil which, in fact, accounted for 19 percent of GDP and 76 percent of exports in 2014.[1]

Falling commodity prices have also influenced Turkmenistan where the economy is mainly based on natural gas sales. It should be noted that falling commodity prices also directly affected Russia, where millions of migrant laborers especially from Central Asia find work. Remittances from these workers fell sharply in 2015. Tajikistan, Kyrgyzstan, and Armenia are the most remittance-dependent countries of the region with money sent to home being equivalent to nearly 40 percent of their GDP. As per World Bank report, the ongoing recession in Russia is bringing adverse spillovers through trade and remittances, which have fallen precipitously in US Dollars.[2]

In addition to falling commodity prices, exchange rates have come under pressure and in some countries non-performing loans have ticked upwards or have reached elevated levels. High interest rates and efforts to defend exchange rates have led to tightening of monetary policies.[3]

Despite some expected uptick from the mediocre performance in 2015, prospects for the region for generally more bleak. Economic growth is subdued, external accounts are under pressure, and exchange rates are weakened. The outlook for the foreign trade sector across the region diverges between commodity importers and exporters. While commodity prices are projected to remain low for longer period, net exporters like Azerbaijan and Kazakhstan face further adjustments to the deterioration in the terms of trade, which is weakening current account balances and eroding reserves.

Dr. Shamsad Akhtar, Under-Secretary General of the United Nations and the current Executive Secretary of the Economic and Social Commission for Asia and Pacific (UNESCAP) approaches the matter from the wide angle and points out that what is needed for overcoming the economic challenges Central Asia facing with is closer regional economic integration with the rest of Asia and the Pacific.[4]

Shamsad, in his article titled “Regional economic integration is key to development success in Central Asia and Caucasus”, stresses that much has already been achieved in the post-independence era. Market institutions are generally well-established and socio-economic progress has been significant, but this is threatened in 2016 by economic contraction, driven by steep decline in commodity prices, as well as by ongoing currency depreciation. The deep and complex reforms necessary to build economies capable of weathering the above-mentioned headwinds have yet to be completed. As per the analyses by the UNESCAP, the economies of North and Central Asia, excluding the Russian Federation, saw GDP growth fell to 3 percent last year, down from 5.1 percent in 2014. Commodity dependence has increased in the last decade. Job-generating growth and wider prosperity in Central Asia and the Caucasus call for a renewed commitment to economic diversification (as in, moving away from over-dependence on oil and gas exports), as well as accelerated regional economic cooperation and integration specifically in priority areas such as cross-border infrastructure in transport, energy, and communication and information technology, as well as for additional policy reforms to support market driven trade and investment-led diversification and integration. Rebalancing and reviving growth and trade, with supportive diversification and structural transformation will be particularly critical. Stronger regional economic integration is imperative to better link these economies to world markets and global value chains.[5]

So far, we have discussed the first factor and how the countries of both the regions have been dealing with the adverse economic global economic conditions of in their 25th independence anniversary. The second factor deals with the efforts towards their integration with the global economic markets. Over the years, this has taken many forms and each country in both regions has experienced this integration at different levels.

In this context, there is a need to pay special attention to regional and sub-regional integration initiatives such as China’s “The Belt and Road” (better known as the Silk Road Economic Belt) initiative as well as discussion on South Asia – Central Asia and further to Europe transport connectivity. All these initiatives aim to advance connectivity of Central Asia and the Caucasus to wider Asia-Pacific region and also the Western countries.[6]

The Central Asia Regional Economic Cooperation (CAREC) program by the Asian Development Bank is one such initiative. Since its establishment, over 100 projects have been completed that have are worth close to 15 billion USD. The end result of these projects is not only to increase cooperation among the ten member countries (Azerbaijan, Kazakhstan, Turkmenistan, Uzbekistan, Kyrgyzstan, Tajikistan, Afghanistan, China, Mongolia and Pakistan), but also to increase their global market integration. This is especially the case for its Central Asian and South Caucasus members.[7]

Another historical, and significant regional initiative that serves almost a similar purpose for the Central Asian and Southern Caucuses countries is the Economic Cooperation Organization (ECO). ECO is the continuation of the organization for Regional Cooperation for Development (RCD)  which was founded in 1964. It was dissolved and later reestablished as ECO in 1985. ECO, as RCD was created by Turkey, Pakistan, and Iran for the purpose of promoting economic, technical, and cultural cooperation among its member states. Later in 1992, the organization membership was expanded. Seven new members were included. The new members were Afghanistan, Azerbaijan, Kazakhstan, Kyrgyzstan, Tajikistan, Turkmenistan, and Uzbekistan.[8]

Currently, one of the most important initiatives of ECO, proposed by the former Director of Energy, Minerals and Environment-ECO Secretariat Mahmood Khaghani, regarding the Southern Caucuses and Central Asian region, is the Energy and the Petroleum sector. One of the possible goals is to create a new ECO-Caspian gas framework in the Southern Caucasus and Central Asian region (which will also include Iran). One of the key elements of this new model is that in the new model, energy trades will be priced in dollars without being settled in dollars. This would allow the regions dependence to dollar, or specifically to “petrodollar” to disappear or to slowly dimish. This would create a more independent and  stable market in both regions overlong time.[9]

Since they gained their independence, Turkey has pursued a multi-dimensional policy regarding the Southern Caucasus and Central Asian countries. Its policy has been based on economic fundamentals and its Turkic identity. This year, it was declared by the Turkish government that Turkey would slowly but steadily increase its trade with each country in both regions. As part of their 25th year independence anniversary of the Southern Caucasus and Central Asian countries for example, it was decided that the Ministry of Economy of Kazakhstan and Turkey would meet every month to achieve this goal. It should be noted that Turkey is already either the largest or is one of the largest investors in the region.[10]

Over the last 25 years, the South Caucasus and Central Asian countries have economically come a long, difficult path. Today, as they are celebrating their 25th independence anniversary, they are facing old and new challenges. Each country in the two regions is dealing with these both historical and current challenges at different levels. Despite these differences, over the last 25 years, most of these countries have answered one fundamental question. The question is not whether will they eventually economically develop, the question is in what timeframe they will develop economically and finally achieve full economic integration to the global economic markets.