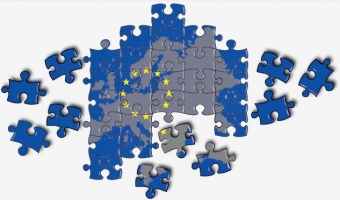 The EU Commission adopted in February 2018 a strategy under the title of “A credible enlargement perspective for an enhanced EU engagement with the Western Balkans”. The strategy considers the enlargement policy “as part and parcel of the larger strategy to strengthen the EU by 2025” set out by President Juncker in his State of the Union speech of September 2017, describing this enlargement as “ investment in the EU's security, economic growth and influence and in its ability to protect its citizen.” He repeated several times that “the Union must be stronger and more solid, before it can be bigger”. In this respect, he proposed the use of qualified majority voting in the Council as a key tool that enables the necessary decisions to be taken in a European Union of 27 and recommended the further enhancement of the use of qualified majority voting in the third quarter of 2018. He also suggested that special arrangements and irrevocable commitments must be put in place to ensure that new Member States, when the time comes, would not be in a position to block the accession of other “Western Balkan” candidates.[1]

The author of this analysis since last year has been trying to bring to the attention the combined efforts of the Western and specifically the European Union countries to transform the Balkan region ontologically, starting with its name.[2] Per these efforts, the Balkan region was divided into three sub regions. According to this misconceived divions Croatia, Bulgaria, Romania, and Greece, since they are members of the EU, are not part of the Balkans anymore. On the other hand, Bosnia-Herzegovina, Serbia, Montenegro, Kosovo, Albania, and Macedonia comprise the so-called "Western Balkans" sub-region.  Turkey, by its lonesome self, makes up the "Eastern Balkans" region. It should be mentioned in this context once and again that even though the term "Western Balkans" has been long in the making, it cannot be considered as a historical term. From my standpoint, it is an artificial term created by the European Union in the early 1990s to serve a discriminatory political end. It seems that the term, when it was created, served several purposes. Firstly, it allowed the policy makers in Brussels to further exclude Turkey from the enlargement process. Even if the process was not openly designed for such an exclusion, it definitely was of a neat separation of Turkey from the rest of the “Balkan states”. Secondly, the term of “Western Balkans” allowed Brussels to prioritize and approach the non-EU Balkan countries in a compact manner. Thirdly, it allowed certain policy makers in Brussels who had lost faith in the term of Balkans to start a democratization process in the region with a blank slate. It allowed, in a certain degree, these policy makers to leave behind the concept of “Balkanization” at least on paper in spite of the fact that they are mentally excluding from enlargement a country like Turkey which is geographically and historically one of the major constituent part of the Balkans. This approach, to my mind, left aside hundreds of years of past accumulation of experience of Turkey in the region which could have been easily utilized by the EU by way of including Turkey into the regional equation in favour of the EU.

The above mentioned strategy of the EU while explaining the respective European paths of the “Western Balkan” countries describes Montenegro and Serbia as “the current front-runners in the process”. Albania and in their biased terminology of “the former Yugoslav Republic of Macedonia” are labelled as countries “making significant progress on their European path” of which “the Commission is ready to prepare recommendations to open accession negotiations, on the basis of fulfilled conditions.” As to Bosnia-Herzegovina, the strategy declares that the “Commission will start preparing an Opinion on Bosnia and Herzegovina's membership application following receipt of comprehensive, complete answers to its Questionnaire.” It also stresses that “with sustained effort and engagement, Bosnia and Herzegovina could become a candidate for accession”. As regards Kosovo, the strategy ambiguously states that Kosovo “has an opportunity for sustainable progress through implementation of the Stabilization and Association Agreement and to advance on its European path once objective circumstances allow.” It also stressed openly that Kosovo will “benefit considerably from a definitive normalization agreement with Serbia. The strategy considers that these countries could potentially be ready for membership in a 2025 perspective. According to the strategy, 2025 perspective is especially valid for Serbia and Montenegro.

Lately it is reported in the European online newspaper euobserver that the EU foreign ministers during their meeting in Sofia on 15th February discussed for the first time the EU executive's strategy on the region and, to my mind, unsurprisingly disagreed over the terms and time-table of the integration of the “Western Balkans”.[3] It is communicated in the aforementioned report that Hungarian foreign minister, Peter Szijjarto said in the meeting that he was "very much disappointed" by the 2025 target, which he called "very late", arguing that Serbia and Montenegro should be admitted by 2022.  He interestingly also said that "It is obvious the US has a Western Balkans strategy, Russia has a Western Balkans strategy, Turkey has a Western Balkans strategy; it is only the European Union that is extremely slow".  On the other hand, some of the other EU members like Slovenia and Croatia have tried to sort out their long-standing border disputes with Serbia. Slovenian foreign minister Karl Erjavec said that even 2025 was "not realistic". He further expressed the view that “Slovenia has had 20 years of dialogue with the Croatian side to find a solution regarding the border between Slovenia and Croatia. The same with Croatia and Serbia, 26 years and with Bosnia and Herzegovina and Montenegro". He added that “I think that it is not possible to expect this condition in 2025, and this can be a big problem for EU enlargement and the Western Balkans". In addition to these contradictory views, five EU countries still do not recognise the independence of Kosovo. Apart from these, Greece, as it is well known, is still vehemently opposing to the name of Macedonia and is constantly clashing with this country over this issue.

In spite of all these, it is mentioned in the reports that EU leaders are expected to formally endorse the EU's strategy during a special summit in Sofia, Bulgaria, in May. In this respect, it is reported that speaking after co-hosting a summit of Western Balkans leaders in Sofia on March 1, European Commission President Jean-Claude Juncker said he would be returning to Brussels even more convinced that the place of the “Western” Balkan countries was in the EU. He reiterated the possibility of “Western” Balkan countries becoming EU members in 2025, but, according to reports, added that “not that I want to offend anyone” but at this stage, none of the countries met the conditions to do so.[4] He also noted that in Sofia in May 2018, there would be an EU-“Western” Balkans summit, and the main theme would be not the accession of the countries of the region to the EU, but migration issues and the economic situation of the region.

Time will show us whether the EU will succeed in to find the ways not to stick in a cul-de-suc in the Balkans. It should be underlined that instead of excluding, resuming cooperation with Turkey in the Balkans might be still a realistic as well as pragmatic way for the EU to succeed in the region.

[1] “Communication From The Commission To The European  Parliament, The Council, The European Economic And Social  Committee And The Committee Of The Regions” (European Commission, June 2, 2018), COM(2018) 65 final, https://ec.europa.eu/commission/sites/beta-political/files/communication-credible-enlargement-perspective-western-balkans_en.pdf.

[4] “Juncker at Sofia Meeting: ‘Even More Convinced Place of Western Balkans Is in EU,’” The Sofia Globe, October 3, 2018, https://sofiaglobe.com/2018/03/01/juncker-at-sofia-meeting-even-more-convinced-place-of-western-balkans-is-in-eu1/.