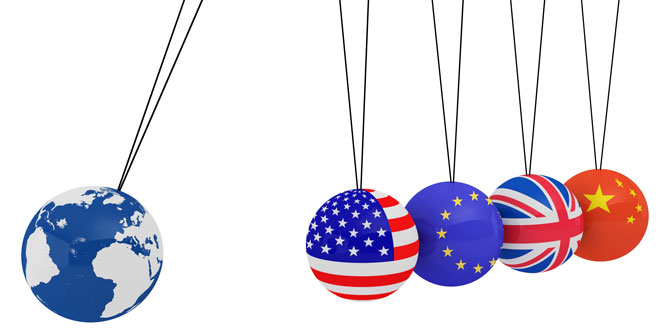 Brexit is a word that is used as a shorthand way of explaining the UK’s withdrawal form European Union (EU). It is the merger of the words ‘Britain’ and ‘exit’. As it would be recalled, a referendum vote was held on 23 June 2016 to decide whether the UK should leave or remain in the EU. ‘Leave’ votes won by 52% to 48%. The referendum turnout was 71.8%, with more than 30 million people voting. England voted for Brexit, by 53.4, as did Wales. Scotland and Northern Ireland both backed ‘Remain’ by 62% to 38%, while 55.8% in Northern Ireland voted ‘Remain’ and 44,2% ‘Leave’.[1]

Britain got a new Prime Minister after the referendum. The former Home Secretary Theresa May took over the post from David Cameron who initiated the referendum process and staunchly defended to stay in the EU. Despite defending the same view to stay in the EU, the new Prime Minister announced that she will respect the will of the people and stressed that “Brexit means Brexit”.

In order for the UK to leave the EU, it has to invoke the mechanism envisaged in the Lisbon Treaty which gives any EU member state the right to withdraw from the Union in accordance with its own constitution. Per article 50 of the Lisbon Treaty, an EU member state that decides to withdraw must notify the European Council of its intention. Then, the Union starts to negotiate and conclude an agreement with that state in two years setting out the arrangements for the withdrawal. Prime Minister Theresa May also announced that she intends to trigger this process by the end of March 2017, meaning the UK will be expected to have left the EU by the summer of 2019.

In order to better understand the reasons of Brexit, it would be helpful to analyze the recent speech delivered by Prime Minister Theresa May at the Davos World Economic Forum. In her speech, she eloquently explained that by leaving the EU, the UK embraces the world. She said, “Let us not underestimate the magnitude of this decision. It means Britain must face up to a period of momentous change. It means we must go through a tough negotiation and forge a new role for ourselves in the world. it means accepting that the road ahead will be uncertain at times, but believing that it leads towards a brighter future for our country’s children, and grandchildren too.”  She also stressed that with Brexit, the British people “…chose to build a truly Global Britain” and Britain will “become even more global and internationalist in action and in spirit too.” She further stated that the UK is a European country, but also a country that has always looked beyond Europe to the wider world and that is why by instinct, as a global trading nation, seeks to trade with countries not just in Europe, but beyond Europe, to build relationship with old friends and new allies.[2]

Theresa May, while referring to globalization, drew attention to the fear of the people to lose their jobs and wage undercuts and explains the need to respond to the concerns people have. She also stressed that there is a need to work together to shape new policies and approaches that demonstrate their capacity to deliver for all the people.

The thoughts put forward by Theresa May in explaining the Brexit by stressing the national interest and historical relations of Britain bring to the fore a new thinking on globalization that combines economic, political, and cultural factors. This new approach, while rejecting globalization at the European scale, suggests a kind of “global scale “globalization. She describes this approach as “truly Global Britain.”  In fact, this approach reminds the imperial heritage and instincts of Britain. Theresa May, in this context, highlights the great conservative principle of “change in order to conserve”.

Like the British Prime Minister, President of the People’s Republic of China Xi Jinping has also put  the accent on globalization in his Davos speech. Interestingly HE mentioned that “many of the problems troubling the world are not caused by economic globalization”, that“Economic globalization has powered global growth and facilitated movement of goods and capitals, advances in science, technology and civilization, and interactions among people”. Unlike some of his counterparts. Chinese President defended in length the economic globalization and stressed that “Any attempt to cut off the flow of capital, technologies, products, industries, and people between economies, and channel the waters in the ocean back into isolated lakes and creeks is simply not possible, Indeed, it runs counter to the historical trend.”[3]

After the stunning victory of US President Donald Trump in the 2016 November presidential election in the US,  many drew a comparison between the Brexit and the US election and argued that both were a repudiation of globalization. Even former President Obama acknowledged that the globalized policies of the world have absolutely contributed to a political upheaval that has given rise to the Brexit vote and a PresidentTrump presidency.  In fact, President Trump made rejection of globalization a centerpiece of his campaign, and in his July 21st acceptance speech, as he said “Americanism. not globalism, will be our credo”.[4]

President Trump has also launched a tough attack against the EU and NATO. He described the EU as failed project and recommended its members to follow the UK’s example and abandon it. He mentioned the NATO as an “obsolete” organization whose time has passed. He has criticized German chancellor Angela Merkel’s asylum policies, threatened to impose import tariffs of between 30% and 35% on BMW vehicles if the company goes ahead with its investment plans in Mexico. President Trump predicted that the EU would fall apart, and suggested that the US wouldn’t really care if it did.[5]

All these statements of President Trump clearly indicates a very powerful assault on the existing western post Second World War military, political and economic order. The 2016 US Presidential election result, in combination with the Brexit, indicates not only a major paradigm shift for globalization but signals an upcoming new world order. President Trump’s recent announcement of withdrawal from Trans-Pacific Partnership (TPP) may be considered as the first concrete sign of movement in this direction.  TPP was one of the efforts of the previous US administration to provide a check on China’s economic and military ambitions.  In Asia, the US withdrawal from TPP most probably will create new strategic opportunities for China in Asia-Pacific.

In a time of such uncertainty, Turkey’s bid to join the European Union and its vision to become an active partner in the Eurasian platforms become all the more important.  In this vein Turkey would be well advised to continue with its multi-faceted foreign policy and while trying to consolidate its positions in the western institutions, it should prepare itself to contingencies of new world order.