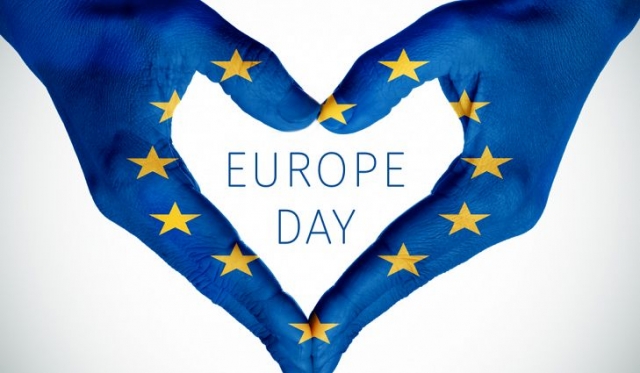 Every year on May 9, the European Union (EU) observes Europe Day and marks the anniversary of the “Schuman Declaration”. The EU website states that “At a speech in Paris in 1950, Robert Schuman, the then French foreign minister, set out his idea for a new form of political cooperation in Europe, which would make war between Europe's nations unthinkable.” Schuman's proposal paved the way for the creation of European Coal and Community in 1951, which eventually evolved into today’s European Union.[1]

As it is stated in the recent Euronews report, “A quick online glance at the main institutions of the European Union reveals many feature articles or tweets on Europe Day.”[2] On this occasion, while EU institutions in Brussels, Luxemburg, and Strasbourg arrange Open Days in their premises, “local EU offices in Europe and all over the world also organize a variety of activities and events for all ages.”[3]

Europe Day has also been celebrated in Turkey “since the endorsement of Turkey’s candidacy to the EU membership in 1999”.[4]

Despite the fact Europe Day has been celebrated in the framework of the EU, is Europe Day actually an EU idea?

When EU was institutionally proclaimed the European Day?

During the period when the EU was known as the European Community, the European Council meeting of 28 and 29 June 1985 in Milan approved the proposals set out in the final report of the ad hoc Committee on a People’s Europe, known as the Adonnino Committee. The proposals included those concerning the adoption of the flag and anthem of the European Community and establishing “Europe Day”.[5] It should be mentioned that Milan European Council Conclusions do not specifically mention the Europe Day under the heading of “A people’s Europe”.  The decision states the following on this topic:

“The European Council thanked the ad hoc Committee on a People's Europe for its initial report and for its final report submitted in Milan, both of which contained numerous concrete measures aimed at involving the citizens of Europe more determinedly in the construction of the Community.

With regard to the latter report, the European Council approved the proposals which it contained. Those proposals concerned inter alia citizens' rights, culture, youth, education and sport. […]”[6]

In this context, the final Adonnino Committee report makes the following proposal concerning the “Europe Day” under the heading of “5.5. The European image in education”:

“(iii) confirming 9 May of each year as Europe Day with a view to creating awareness and giving information in schools in particular as well as on television and in the other media. The date of 9 May, which is of great significance to the Community, will fit in with similar initiatives taken by the Council of Europe”. [7]

At this point, it is worth mentioning that ad hoc Committee on a People’s Europe also referred in their report to “a need, for both practical and symbolic reasons, for a flag and an emblem to be used at national and international events, exhibitions and other occasions where the existence of the Community needs to be brought to public attention.”[8]

Since this report provides a detailed information concerning the historical background of the emblem and flag of the EU, it is also worth quoting the relevant parts of the report here under:

“9.1. There is clearly a need, for both practical and symbolic reasons, for a flag and an emblem to be used at national and international events, exhibitions and other occasions where the existence of the Community needs to be brought to public attention. A decision on this matter is required in order to avoid misunderstanding and confusion. The Committee agrees with the European Parliament’s idea that a design which could be used for both a Community emblem and a flag should be basically that chosen by the Council of Europe. However, bearing in mind the independence and the different nature of the two organizations, the Committee proposes to the European Council that the European Community emblem and flag should be a blue rectangle with, in the center, a circle of 12 five-pointed gold stars which do not touch, surrounding a gold letter E, of the design already used by the Commission.

The European Council should express the hope that the emblem and flag will be used at appropriate places and on suitable occasions, without of course affecting the use of national flags, and asks the institutions to agree to regulate the use of flag and emblem.

9.2. The music of the 'Ode to Joy' from the fourth movement of Beethoven’s ninth symphony is in fact used at European events. This anthem has also been recognized by the Council of Europe as being representative of the European idea.

The Committee recommends to the European Council that this anthem be played at appropriate events and ceremonies.”[9]

Despite the fact that the use of the flag, anthem, and Europe Day continued after the evolvement of the European Community into the European Union, these symbols never become constitutionally recognized.[10] The European Constitution would have legally enshrined all the European symbols in the EU treaties; however, the treaty failed to be ratified in 2005, and so their usage only continued in de facto manner. The Constitution's replacement, the Treaty of Lisbon, contains only a declaration by sixteen members supporting the symbols.

The said declaration’s article 52 states that “ Belgium, Bulgaria, Germany, Greece, Spain, Italy, Cyprus, Lithuania, Luxemburg, Hungary, Malta, Austria, Portugal, Romania, Slovenia and the Slovak Republic declare that the flag with a circle of twelve golden stars on a blue background, the anthem based on the ‘Ode to Joy’ from the Ninth Symphony by Ludwig van Beethoven, the motto ‘United in diversity’, the euro as the currency of the European Union and Europe Day on 9 May will for them continue as symbols to express the sense of community of the people in the European Union and their allegiance to it.”[11] As can be seen from the list of countries participating in the declaration, France, which is the champion of European integration in the context of rhetoric, was not among the countries that originally supported the symbols. France endorsed the said declaration after nearly 11 years at the end of 2017.[12]

On the other hand, the European Parliament made amendment to its Rules Procedures concerning the symbols in October 2008 and inserted “in Parliament's Rules of Procedure of a new Rule 202a on the use by Parliament of the symbols of the Union”[13]  The said rule states that the Parliament shall recognize and espouse the flag showing a circle of twelve golden stars on a blue background; the anthem based on the ‘Ode to Joy’ from the Ninth Symphony by Ludwig van Beethoven; the motto “United in diversity”, and shall celebrate Europe Day on 9 May.

As it could be understood from the language of the Rule 202a, the decision only binds the European Parliament.

All the symbols of the EU were in fact produced and accepted by the Council of Europe of which Turkey is a founding member. The original Europe Day is 5 May

The Council of Europe was founded on 5 May 1949 by the Treaty of London which is in fact constitutes The Statute of the organization. The treaty was first signed by ten states. Turkey was invited to the organization as a founding member[14] in August 1949.

The Consultative Assembly, now known as Parliamentary Assembly, was created as one of the two statutory organs of the Council of Europe together with the Committee of Ministers in order to serve as its deliberative body. In August 1949, the Consultative Assembly, provisionally chaired by Édouard Herriot, met for the first time in the auditorium of the University of Strasbourg. The following day, the Belgian Socialist delegate and former Foreign Minister, Paul-Henri Spaak, was elected President of the Assembly. They debated how to reconcile and reconstruct a continent still reeling from war, yet already facing a new East-West divide, launched the concept of a transnational court to protect the basic human rights of every European citizens.

It is worth to mention that this dual intergovernmental and inter-parliamentary structure was copied by the European Communities, North Atlantic Treaty Organization (NATO), and the Organization for Security and Cooperation in Europe (OSCE).

In October 1964, the Committee of Ministers decided that 5 May, the anniversary of the founding of the Council of Europe, should be celebrated as Europe Day.[15]

In addition to the Europe Day, the Council of Europe made also decisions on European Anthem and Flag in 1972. The decisions in this respect are contained in the Conclusions of the 206th meeting of the Deputies from 11 to 18 January 1972.[16] Regarding the Anthem the decision is stating the following:

(i) adopted as a European anthem the Prelude to the Ode to Joy in the fourth movement of Beethoven's Ninth Symphony.

(ii) agreed to recommend to their governments that steps should be taken to ensure that the European anthem is played in as many municipalities, schools and at as many events as possible on 5 May 1972, if possible alongside national anthems;”[17]

As to the European flag, the resolution is stating the following:

In the light of the Round Table's request that governments should see to it that national law does not prevent the European flags being flown from public buildings to mark the celebration of Europe Day, most delegations stated that there was nothing in their national law to prevent this. Some delegations were not in a position to state clearly the situation without examining the matter first.”[18]

The European Union has long been behaving as if it represents the whole Europe and acting with the claim that all values of Europe, including Europe-wide symbols, were created by the EU. What we have explained above reveals that certain Europe-wide organizations such as the Council of Europe played a more effective unifying role than the EU. In this respect, the Council of Europe has succeeded in bringing together all European countries around the common ideals and symbols, and even produced the symbols that the EU is proudly using today.

The EU's overly bureaucratic and patronizing behaviors and decisions mainly shaped by two of its dominant members (Germany and France) are irritating even some of its members and most of their people. Brexit is in fact the most vivid example of this actuality. The EU’s discriminatory approach towards Turkey, which has been an EU partner country for 55 years is another example in this regard. It is regrettable that the EU, which claims to be integrating Europe, is today not only dividing Europe but also creating divisions within itself.

Europe today needs unifying approaches more than ever. It is easy to divide, but difficult to bring people and countries together. Divisions and self-centeredness have brought disaster and destruction to Europe in the past. The First and Second World Wars have caused immense destruction and pain due to such divisions. We should consider these past experiences when celebrating Europe Day.

It should not be forgotten that 9 May is also the anniversary of the Soviet Union’s victory over Nazi Germany in 1945. As one scholar states “This is celebrated in Russia as Victory Day, but for Central and Eastern Europe, the end of the Second World War brought not only victory and liberation, but further defeat, occupation and oppression. It is this experience – rather than the Franco-German reconciliation signiﬁed by the Schuman Declaration – that deﬁnes the post-war period for the EU’s newer member states, limiting their ability to connect with Europe Day as a unifying symbol.”[19]

In this context, in my opinion, it will be much more meaningful to celebrate Europe Day on 5 May, as decided by the Council of Europe. If it is to be insistent on a date, let the EU celebrate the French-German reconciliation as Europe Day on 9 May.