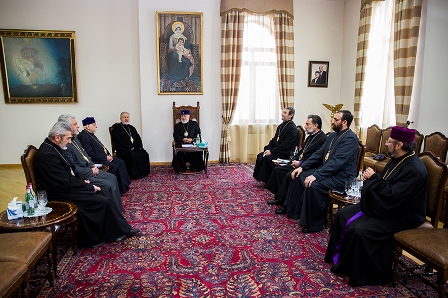 A new phase has been entered in the dispute over the election of a new patriarch that has been continuing for years within the Armenian community of Turkey[1] ever since 2008 when Patriarch Mesrob II Mutafyan (the spiritual leader of the Armenian Patriarchate of Istanbul) became unable to fulfill his duties due to his illness.

2) With the election of the trustee, Vicar General of the Armenian Patriarch of Istanbul Archbishop Aram Ateshian will leave his office and transfer his authority to the trustee.

4) The enterprising committee will be responsible for giving equal opportunities for the promotion of all patriarch candidates.

5) If the patriarch election is not held within six months, a vote of confidence will be held for the trustee and the enterprising committee by the Armenian Patriarchate of Istanbul.

The first three points pertain to Karekin II himself. The first point, as mentioned above, concerns the Karekin II meddling in the internal affairs of the Armenian Patriarchate of Istanbul despite this being outside the scope of his authority, and his attempt in this framework to steer the patriarch election. Karekin II had previously ostracized Vicar General Aram Ateshian due to Ateshian objecting to the Armenian community of Turkey being dragged into international political intrigues.[5] The fact that Karekin II this time extended an invitation beyond this authority and that Ateshian accepted such an invitation has especially raised questions.

The second point concerns Karekin II’s prejudices about Turkey and Turks. It is clear that the outside intervention carried out by a Karekin II possessing a highly unconstructive demeanor against Turkey and Turks cannot have any positive impact on the election of a religious official who plays an important role in the relations between the Armenian community of Turkey and the state of the Republic of Turkey.

The third point concerns Karekin II’s personality and the scandals with which his name has been mentioned until today. Karekin II, due to his behavior, has tense relations with Armenian Catholicos of Cilicia Aram I and is still in a state of hostility with the Armenian Patriarch of Jerusalem Nourhan Manougian.[6] What positive contributions to the election of the Istanbul patriarch can there be of the intervention (under the excuse of Church traditions) of an individual who has troubled relations with the highest-ranking officials of the Armenian Apostolic Church, whose name is recalled alongside complaints and scandals, and even worse, who belittles the historic importance of the Armenian Patriarchate of Istanbul[7]?

The fourth and last point concerns the content of the meeting that was held in Etchmiadzin on 23-24 February. Even though not much information as been given to the press about the contents of what was discussed in the meeting, it is possible to arrive at some conclusions based on the statements given to the press by the patriarch candidates who had attended the meeting.[8] The most important conclusion is that Karekin II and the other three patriarch candidates attempted to persuade Vicar General Ateshian to not become either a trustee or -in the subsequent step- a patriarch candidate (however, Ateshian refused these persuasion attempts and stated that he would become a candidate). In their statements given to the press after the meeting, the other three candidates, to put it briefly, have all similarly advised Ateshian not become a candidate (they nevertheless conceded that he has the right to become a candidate), and claimed that him becoming a trustee would have negative impacts on the election process and that his election as the patriarch would damage the Armenian community of Turkey. Judging from the statements made by the patriarch candidates who stand in opposition to Ateshian, it can be understood that the meeting held in Etchmiadzin was not organized for “consultations”, but rather jointly put pressure on Ateshian and to deter him from running in the patriarch election. The mindset behind organizing such a meeting seems to be “anyone but Ateshian should become the patriarch”. The opposition campaign against started against Ateshian both in Turkey and abroad (spearheaded in the media by the Agos newspaper) did not really originate from Ateshian’s conduct as the vicar general or from his overall behavior, but rather from the efforts he spent to keep the Armenian community away from international intrigues.[9] Is it possible to argue that a meeting supposedly held for consultations, but which was really held to specifically target and pressure a patriarch candidate reflects good intentions?

It would not be surprising if question marks have been raised in the heads of the members of the Armenian community in Turkey over the patriarch candidates who have bowed down to the unauthorized outside intervention of Karekin II, who is known for his problematic personality. It would also not be surprising if the members of the Armenian community approach the patriarch candidates with suspicion from now on. Beyond this, all four patriarch candidates possess their own set of problems. While Aram Ateshian, as the vicar general, is significantly experienced in heading the Istanbul Patriarchate, he faces stiff opposition from Armenian groups both within Turkey and abroad. Sahak Mashalyan is claimed by certain groups to have a courageous and proper personality.  However, by falling prey to his emotional nature and anger that led him publishing a letter (stating his resignation from his office and his withdrawal from patriarch candidacy) in which he used words bordering on insults against the Armenian Patriarchate of Istanbul and the Armenian community of Turkey,  Mashalyan has demonstrated that he lacks the maturity that is expected of a patriarch. Mashalyan later on stated that he regretted the wording of his letter, and claimed that his resignation actually did not go into effect and that he was greeted with much public support for his patriarch candidacy.[10] The patriarch election process with reveal how realistic Mashalyan’s claims are. Meanwhile, Karekin Bekchian and Sebouh Chouljian’s candidacies will not be met positively due to their contributions to the claims and positions held by Germany and Armenia regarding the 1915 events.

This situation reveals that it will be difficult to form the consensus necessary for the election of the Istanbul patriarch. Maybe such a situation will lead to the emergence of a candidate whose name is not yet openly mentioned: the Malatya/Turkey-born spiritual leader of the Armenians of the eastern states of the US, Khajag Barsamian.[11] Although Barsamian has previously distanced himself from patriarch candidacy,[12] the present situation could lead to attempts at persuading him to change his mind. Recent articles that have come out in the press have revealed that his name has begun to be mentioned as a potential candidate.

Lastly, the trustee election that is to be held today and the patriarch election that will be held at a later date will reveal how successful Agos is in grasping the public opinion of the Armenian community. This is so because the Agos newspaper, which has been following a rather biased and ideological editorial policy ever since the assassination of its chief editor Hrant Dink, claims that the people do want Aram Ateshian as a patriarch candidate and constantly attempts to put forth the other three candidates.[13] In this respect, how Ateshian fares in the trustee and patriarch elections will demonstrate just how realistic Agos newspaper’s commentaries are.

*Photo: Official website of the Armenian Catholicosate of Etchmiadzin, http://www.armenianchurch.org/index.jsp?sid=3&nid=3395&y=2017&m=1&d=24

[4] “Patriarchate's statement before the visit to Etchmiadzin: there cannot be any instruction”, Agos, 20.02.2017, http://www.agos.com.tr/en/article/17761/patriarchate-s-statement-before-the-visit-to-etchmiadzin-there-cannot-be-any-instruction

[5] Tulun, “The Dispute Over The Election Of The Armenian Patriarch Of Istanbul Has Yet Again Intensified”.

[9] Tulun, “The Dispute Over The Election Of The Armenian Patriarch Of Istanbul Has Yet Again Intensified”.