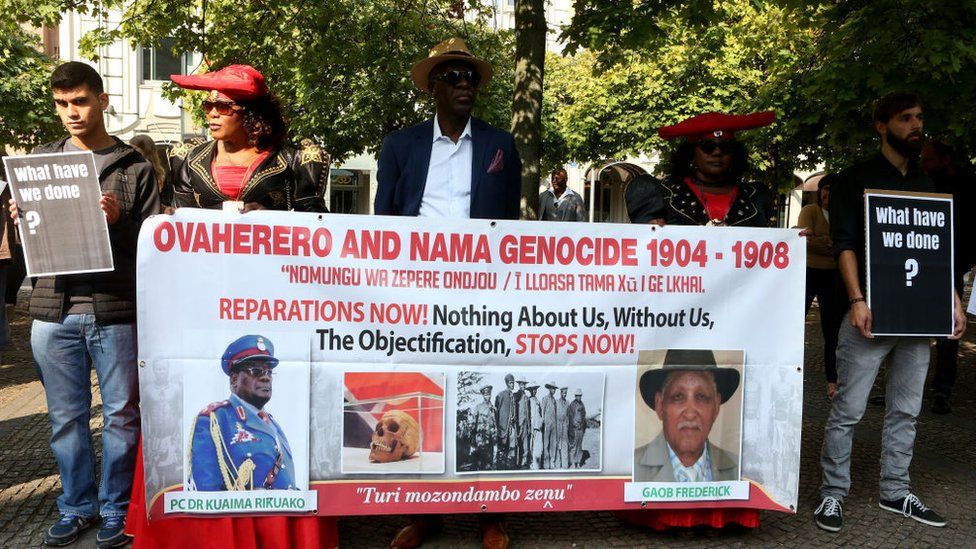 On 28 May 2021, the German government delivered a statement concerning the negotiation process[1] between the Namibian and German governments over the 1904-1908 Herero and Nama genocide dispute.[2] In the statement, the German Minister of Foreign Affairs Heiko Maas expressed the following:

“I am pleased and indeed grateful that we have agreed with Namibia on how to deal with the darkest chapter of our shared history. After more than five years, Ruprecht Polenz and his Namibian counterpart Zed Ngavirue were able to conclude the negotiations which they were conducting on behalf of our two Governments and based on the guidance of our two Parliaments.”

Claiming that representatives of Namibia’s Herero and Nama tribes were “closely involved” in the negotiation process, Maas indicated that “We [Germany] will now officially call these events what they are from today’s perspective: a genocide.” Maas added the following:

“As a gesture of recognition of the immeasurable suffering inflicted on the victims, we want to support Namibia and the victims’ descendants with a substantial programme to the tune of 1.1 billion euro for reconstruction and development. The communities affected by the genocide will play a key role in shaping and implementing this programme.  Legal claims for compensation cannot be derived from it.”

The Namibian government’s initial reaction came from the spokesperson of the Namibian President Hage Geingob: “The acceptance on the part of Germany that a genocide was committed is the first step in the right direction.”[3] The agreement (referred to in some news articles as the “joint declaration”) reached between the Namibian and German governments needs to ratified by the parliaments of both countries, after which the German President Frank-Walter Steinmeier is expected to deliver a speech at the Namibian parliament and make an apology on behalf of Germany.

Since the initial reporting on the German government’s 28 May statement, the international press seems to have mostly moved on from this subject. However, the statement continues to generate controversy in Namibia as the Namibian public analyzes its content and interprets its meaning.

One issue with the statement is the amount Germany is proposing to pay to Namibia and how this money is to be allocated within the country. On this, the German government gave the following information:

“The projects financed by Germany focus, at the request of the Namibian side, on the fields of land reform, including the purchase and development of land, agriculture, rural infrastructure and water supplies, as well as vocational education, as central priorities in the – partly marginalised – areas where the Nama and Herero have settled. These projects are to be implemented in addition to bilateral development cooperation which is also to be continued.”[4]

However, serious questions have been raised in the Namibian public about how the 1.1 billion Euro figure was reached and who determined this figure. The German government has been accused of determining this figure by itself with little input either from the Namibian government or from the Herero and Nama tribes.[6] As such, Germany is being accused of acting like a perpetrator that determines the severity of the crime’s punishment and attempting force the victim to consent to an arrangement that fits the perpetrator’s interests.[7]

Although the Namibian government reportedly had no specific compensation figure in mind for the negotiation process, compensation demands voiced in the Namibian public opinion reached an upwards of 25 billion Euros. While this was no doubt a classic negotiation tactic of putting forth a maximum figure and settling for something in the middle, there is a huge difference between the initial 25 billion Euros and the 1.1 billion Euros proposed by Germany. Even the Namibian Prime Minister Saara Kuugongelwa-Amadhila has expressed dissatisfaction with the figure proposed by Germany.[8] In this respect, it should be noted that: “German colonisers killed tens of thousands of Ovaherero and Nama people in Namibia between 1904 and 1908. This amounted to some 80% of the Ovaherero and over 40% of the Nama. Their land and livestock were also confiscated.”[9] Considering the severity of Germany’s past actions in Namibia and that the proposed payment of the 1.1 billion Euros will be spread out over a period of 30 years (meaning 36 million Euros a year - pocket change for a wealthy country like Germany), Germany’s offer to Namibia has been considered insultingly low by Namibian politicians, tribal representatives, and ordinary citizens alike.[10]

Another issue is the nature of the proposed 1.1 billion Euro by the German government, as it considers this to be a form of voluntary development aid that cannot be classified as reparations that sets precedents for other claims. Having adopted a defensive legal tactic, the German government argues that the 1948 Genocide Convention cannot be applied retroactively and that its use of the term “genocide” for the 1904-1908 systemic extermination campaign against the Herero and Nama people is based on moral and political responsibility. For this reason, the German government argues that it is not legally obligated to pay reparations. As indicated in the previous article of this series, this legal tactic points to Germany’s double standards when considering its approach to Turkey regarding the Turkish-Armenian controversy over the 1915 Events. On this point, it will be useful to share the following two questions we had asked in our previous article:

“How is it that while Germany -as a country with its politicians, academics, and institutions- is insistent on calling the 1915 Events a genocide and accordingly disregarding historical facts and international law, points to the law to defend itself when the 1904-1908 Events are in question? Why is Germany acting as if it recalls the principals of law only when its own interests are in question?”[11]

Germany’s insistence on providing development aid in place of reparations has caused considerable reactions in Namibia. When the Namibian government embarked on its negotiation process with the German government, it was introduced as resting on three pillars: 1) Germany recognizing that what was perpetrated against the Nama and Herero people would be considered a “genocide” today, 2) Germany apologizing for having carried out this “genocide”, 3) Germany paying reparations to the victimized Nama and Herero people. Critics of the negotiation process between the Namibian and German governments argue that the third pillar, reparations, has been cast aside in the name of receiving development aid.

“In the colonial era, Africans were regarded as ‘barbarians’ who lacked the abilities to bring about economic and technological change, justifying the intervention of the imperial powers.

This view defined how the West perceived and presented Africa in the past, and the echoes of that view may be found today.

Development aid can still be presented in a patronising way, maintaining an unequal relationship.

If it is being seen as an alternative to reparations, with fewer legal ramifications, it does not dismantle the relationship that allowed the genocide to happen in the first place.”[12]

For this reason, the Namibian government has been accused of incompetence and of being a “sell-out” that has bowed to foreign pressure. Meanwhile, the German government has been accused of lacking sincerity and remorse[13], of attempting to use development aid as a form of hush money and genocide recognition as a publicity stunt to counter “French President Emmanuel Macron's [recent] apology to Rwanda for [France’s] role in that country's genocide in 1994.”[14]

Critics have also argued that while the Namibian government had clearly received a mandate from the Namibian parliament to go ahead with the genocide negotiation process with the German government, the German government had not received a similar mandate from the German parliament. The following comment, indicating that Germany’s questionable conduct against Turkey is being closely followed in Namibia, has been made highlighting Namibia’s and Germany’s contrasting stances on the negotiation process:

“‘[…] there is little evidence [in the draft declaration to be signed between the Namibian and German governments] of any direct commitment from Germany to the affected communities as it would have been the case between a victim and a perpetrator who is showing contrition.

While we are made to believe that the government of the Federal Republic of Germany has accepted its historical and moral responsibility towards Namibia, it actually stops short of recognising the genocide committed against our forebears with reference to Genocide [and] only refers to it in passing in the document but not as a matter of fact,’ the [Namibian tribal chiefs critical of the negotiation process] said.

They further noted that this adds insult to injury as Germany’s parliament, during 2016, overwhelmingly voted that the mass killing of Armenians during 1915 by the Ottoman Turks was Genocide.

Perhaps in response to such sentiments, the German government seems to have resorted to marginalizing the relevant Namibian tribes by arguing that German government “could not negotiate directly with the affected communities because they are too divided”[16] and that some tribal representatives failed to play a constructive role in the genocide negotiation process. The Namibian government has politely responded to this by indicating that German officials are entitled to their opinions and that “Namibia has its own processes and institutions to deal with the declaration.”

Considering all this, we can say that Namibia’s pride as a country is on the line: A developing country with a track record of social cohesion and peaceful politics in the unfortunately conflict-prone African continent is faced with the economic and political giant Germany that is one of the leading countries of the European Union. No country or its people would want to be perceived as begging for money and this ordeal between Namibia and Germany is in fact about protecting one’s dignity and demanding a past wrong being rectified.[21] There is an undeniable power imbalance between the two sides; while Namibia has the moral high ground, Germany has the capacity to suppress Namibia’s moral superiority with its economic and political power. The fact that German society is reportedly disinterested in Germany’s colonial past in general and what specifically happened in Namibia in 1904-1908[22] (however, there are signs that this is slowly beginning to change[23]) makes it easier for Germany to dodge uncomfortable questions about its colonial legacy and current policies.

Now that even Germany is characterizing the systemic extermination campaign between 1904-1908 perpetrated against the Nama and the Herero people as a “genocide”, we would like to share some questions we had asked in a previous article of ours:[24]

“Supposedly well versed on the subject of genocide, why did so many ‘genocide scholars’ overlook the extermination policy of 1904-1908 against the Herero and the Nama, and label the 1915 events as being the ‘first genocide of the 20th century’?” [this is frequently done by some political and religious figures as well, such as Pope Francis of the Roman Catholic Church]

“Why did so many “genocide scholars” portray the 1915 events as being the blueprint of the Holocaust, when it seems that the extermination policy against the Herero and the Nama were in fact the blueprint for the Holocaust? How could Germany take the Ottoman Empire as an example for carrying out genocide, when it already had a precedent for such an action based on its own conducts in its colonial possessions?”

And lastly, the cliché and falsified Adolf Hitler quote “Who, after all, speaks today of the annihilation of the Armenians?” allegedly uttered during his 1939 Obersalzberg speech becomes even more suspect in line with what has been discussed above. If Hitler were to refer to any past example, would it not have been the attempted annihilation of the Nama and the Herero people directly perpetrated by Germany? Furthermore, why is an alleged remark from an infamous politician likely suffering from antisocial personality disorder who oversaw the murder of millions of people used as an “evidence” for the genocide claims concerning the 1915 Events?

[2] “Foreign Minister Maas on the conclusion of negotiations with Namibia”, Federal Foreign Office of Germany, press release, May 28, 2021, https://www.auswaertiges-amt.de/en/newsroom/news/-/2463598

[4] “Foreign Minister Maas on the conclusion of negotiations with Namibia”.

[7] Charmaine Ngatjiheue, “Germany faces ‘the sins of their forefathers’”, The Namibian, June 3, 2021, https://www.namibian.com.na/102177/read/Germany-faces-the-sins-of-their-forefathers

[14] Erastus, “Viewpoint: Why Germany's Namibia genocide apology is not enough”.

[18] Ngatjiheue, “Germany faces ‘the sins of their forefathers’”.

[22] Erastus, “Viewpoint: Why Germany's Namibia genocide apology is not enough”.