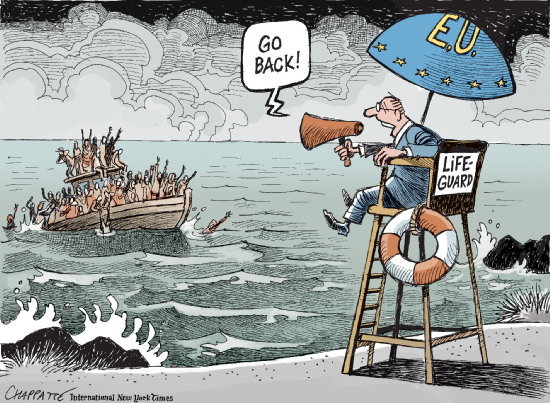 In the process of preparing for the European Parliament elections, as AVİM, we have written numerous analyzes and comments on the worsening xenophobia within the European Union (EU). These studies not only provide insight into the European Union's approach to xenophobia, the extreme right and racism in the upcoming period, but also allow the questioning of EU policies towards foreigners. It is not a realistic approach to expect a change from today to tomorrow regarding the EU's, especially EU member countries’ approach towards Turkey. It is possible to see the evidence of this approach towards Turkey in the worsening of extreme nationalism and xenophobia throughout Europe.

Three years ago, on 2 June 2016, the German Bundestag approved a bill describing the 1915 events as genocide. Even at that time we wrote that the justification behind the passage of this bill through the German Bundestag and the attitude of German media and politicians towards Turkey was the reaction and anger towards the current government in Turkey.[1] It is clear that the real reason is not the German sensitivity for the Armenian community living in Germany. This development in 2016 was an harbinger of the extreme right tendencies which are fully manifesting itself in 2019.[2]

Last year, our work regarding the far right in Europe revealed the gravity of the atmosphere for minorities in Europe. The analyses we have written regarding the political discourse of the European People's Party leader Manfred Weber, who has been opposed to Turkey’s EU accession since long before the European Parliament elections and who has been stating that Turkey had no place in the EU, are accessible from AVİM website.[3]

After the European Parliament elections, it became clear that, although Weber could not be chosen as the ‘Spitzenkandidat’, Ursula von Der Leyen, a candidate decided upon behind closed doors to be the new President of the European Commission, is regretfully a perfect substitute for Manfred Weber regarding the far-right rhetoric. EPP leader Weber is one of the names who supports Leyen's “European Way of Life” rhetoric.[4] Weber definitively backed von Der Leyen by stating; “I am proud to be European and I cannot understand why people are attacking this concept of “European Way of Life” which is in the defence of Europe.” On the other hand, it should be kept in mind that the number of people who reject the idea of ​​the ‘new Europe’ that von Der Leyen plans to promote is not negligible.

What exactly does the ‘European Way of Life’ idea put forward by the President of the European Commission Ursula von Der Leyen mean? Simply said Von der Leyen and many far-right supporters are concerned that European values ​​are "unprotected".

During the appointment of 27 members of the European Commission the subjects of immigration and asylum, employment, integration and the protection of European citizens from ‘terror’ and ‘cyber danger’ were given to different commisars. One of the most prominent members of the commission is Greek Margaritis Schinas. Schinas stands out as the Vice President who will be responsible for the protection of the European way of life. It is clear from the title and from the views so far heard ​​that “non-European” communities are excluded. The creation of this position and the assignment of a Greek into such a position do not contradict the idea of ​​“Europeanism” defended by von der Leyen.[5] A special importance has always been attached to Ancient Greeks by the Europeans, claiming that they played an important role in the formation of European culture and values since the New Age.[6] While a Greek is preparing to assume this task, it should be remebered that Greeks also lay claim to Alexander the Great's heritage. At the same time, with a mentality of the "other”, they do not hesitate to label the Macedonians as "barbarians" whose historical leader is none other than Alexander the Great.[7]

Weber also defined “European Way of Life” approach by excluding Turkey from the scope of the concept and saying that “Turkey has no place in the European Union”. Although Weber was not able to get the post he wanted at the end of the day, someone with the same views becoming the European Commission President actualizes his idea of “exclusion of non-Europeans”, thereby making the election process of the European Commission a total farce.

“The protection of the European way of life” is an unfortunate coinage, because the idea of protecting the European way of life against the threat of migration in Europe has negative connotations. This mindset is commonly articulated by far right or fascist circles throughout Europe. Therefore, it is surprising that a number of accusations against Ursula von der Leyen have already begun.

Another serious criticism came from Jean-Claude Juncker. He stated that he did not like the idea that the European way of life is opposed to immigration and stressed that the acceptance of immigrants was indeed essentially a part of the European way of life.[9] In addition, Juncker stated that he knew well the new commissioner who was nominated for the job. Until the time he was assigned this position, Schinas was a close collaborator of Juncker as the secretary general of the European Commission. Juncker underscored that Schinas is a person who by no means embraces European values. He therefore stated that he did not think that he was a good choice for this position.

David Sassoli, The chairman of the new European Parliament, also questioned the idea of “European Way of Life”[10] and pointed out that in view of the heated discussions taking place  he called for a joint meeting with the heads of the political groups in the European Parliament as well as with von der Leyen in order to clarify the issue. This action could also be interpreted as a move directed against von der Leyen.

The Greens/European Free Alliance (The Greens/EFA) group in the European Parliament has also vigorously criticized[11] von der Leyen and opposed from the very beginning her becoming the European Commission President. They underlined the “European way of life” term is a message which encourages the extreme right in Europe.[12] Karima Delli, the representative of the Greens/EFA, underlined that the term reflects an understanding which  contradicts the fundamental principles of solidarity and cooperation in Europe.

Nowadays, it is widely speculated that Merkel did not give enough push to Ursula von Der Leyen's prospects of becoming the head of the Christian Democrat Party because she was not up to the measure to lead such an important party in Germany.

In short, the European Parliament, think-tanks in Europe, European Commission President Jean-Claude Juncker and the Greens/EFA took their turns to oppose von der Leyen's "Portecting European way of life" concept. This is clearly a project closely related to the extreme right wing of Europe thereby likely to create serious tensions in the political and social landscape of Europe. By launching this concept and trying to create a portfolio within the Commission von der Leyen has provided irrefutable evidence that her racist mindset is not much different than that of Manfred Weber, one of the leading proponents of extreme right-wing ideas and xenophobia in Europe of today.