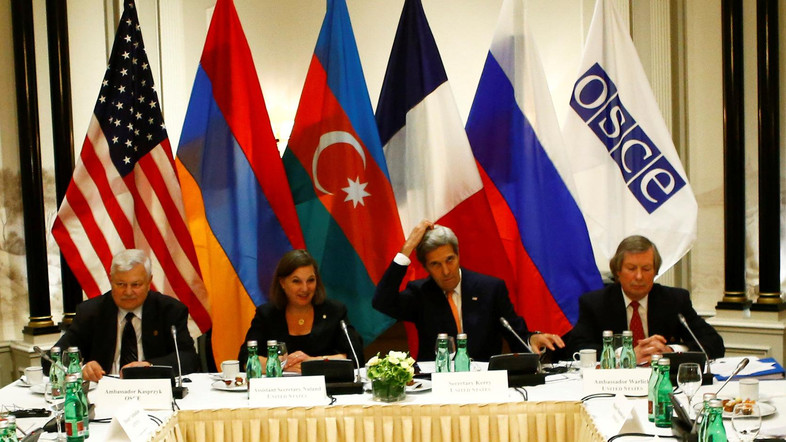 Richard Kauzlarich, the former ambassador of the United States in Azerbaijan and David J. Kramer, a former assistant secretary of state for democracy, human rights, and labor published an article titled as ‘Azerbaijan election is a farce’ in the Foreign Policy magazine on the 11th of April - the date of presidential elections in Azerbaijan.

Making comparisons between the elections in Putin’s Russia and Sisi’s Egypt Kauzlarich and Kramer argued that the ‘snap’ presidential election in Azerbaijan is going to make this country closer to the model of ‘kleptocratic autocracy’. Moreover, they sort out other problems in Azerbaijan discerned from where they look, like human rights abuses, collapsed economy, NGO shutdowns and etc. and interrogate  the reason lying behind the ‘quiet diplomacy’ of the US governments towards these issues for decades. The authors are interested in defining the cause of American silence which according to them does not favor either the lives of Azerbaijan people or the US interests in the region.

The authors come up with the conclusion that due to the fact that Azerbaijan is an oil-rich country with significant geopolitical pathway for American forces to Afghanistan the US governments tolerate a corrupt regime which abuses human rights and hinder the democratic evolution within the country. Moreover, they indicate that the obsession of the US and Western countries with the regime in Russia evade their attention and does not allow them to work on the ‘promotion of human rights and democratic values’ in other collapsed systems of the region.

The article written ostensibly by pundits touches upon only few points of the whole story with a biased and one-sided perspective. In order to spread up the investigation there are a number of questions which should be answered. The article brings out the need for American ‘quiet diplomacy’ to be investigated. With stressing on the points ignored and exaggerated in the American political and epistemological societies we will interrogate the partiality of “quiet diplomacy” pertaining to the agendas of Azerbaijan and Armenia which were not mentioned by Kauzlarich and Kramer.

Firstly, we will commence with indicating ‘quiet diplomacy’ of the US towards Azerbaijan differently from the authors’ point of view. We would like to start with referring to the ‘silence’ of the USA during and after the Nagorno-Karabakh war, the ongoing trauma in which Azerbaijan people were and are in desperate need of the immediate solution. Relatedly, the ignorance of Nagorno-Karabakh problem, and the intentional ‘mistakes’ done by the American politicians and media for favoring Armenian interests will be touched upon.

Nagorno-Karabakh war which is now confined to a “frozen conflict” between two neighboring countries of South Caucasus – Armenia and Azerbaijan – resulted with the Armenian occupation of Azerbaijan’s 20% of territory, the loss of more than 15000 lives and the emergence of hundreds of thousands of Azerbaijani refugees and displaced people. This is a “present” left by the collapsed empire during the withdrawal from its former entities. Although the intensive battles between the two sides have been terminated with signing a ceasefire agreement in 1994, the irregular gun shootings and escalated tensions in different time lapses continue to take lives from both parties. Despite the involvement of important actors of international community like Russia, USA and France in the mantra of the OSCE Minsk group to find a peaceful solution of the conflict, it has been more than two decades that this tragedy is left unsettled.

Regarding to the point mentioned above that it is almost a tradition of the collapsed power to leave unresolved problems during its retreat from the regions, the motive of Russia to maintain a platform to maneuver in the post-soviet zone is not surprising. Not only Nagorno-Karabakh conflict, but also other crises existing in the post-Soviet world can be regarded as the leverage of Russia to maintain its grip of intervention when necessary.

What about the superpower and the victor of the Cold War who claimed to be the vanguard of the promotion of democracy, human rights and market economy in the post-Soviet region during the early 1990s? The USA lost its credibility in the Caucasian region with deciding not to involve in the solution of “frozen” conflicts. As a mediator in the Nagorno Karabakh conflict the USA indeed took the strategy of keeping silence under the guise of “quiet diplomacy”. The worst thing in this case is that this quietness is decorated with prejudiced and biased approaches towards only one side of the conflict.

The Freedom Support Act adopted by American Congress in 1992 presented support to the fifteen post-soviet countries in terms of economic and humanitarian assistance. Indeed the sole state which is prevented from acquiring this aid was Azerbaijan. Based on the section of 907 included in the Freedom Support Act with the request of Armenian lobby in the USA Azerbaijan’s access to the American financial and military assistance was blocked due to its involvement into the “blockades and other offensive” means utilized against Armenia:

Certainly, this step taken by the American Congress triggered questions about the impartiality of the USA as a mediator in the Nagorno Karabakh conflict. Due to Azerbaijan’s strategically important position for American operations in Middle East since 9/11 the waiver of 907 allows this country to be provided with US aid. Nevertheless, the importance of extending the waiver of 907 annually can be evaluated as a leverage in the hands of American policy-makers against Azerbaijan.

With impeding only one party of the conflict from the assistance presented by the American Congress and continuing aid supply not only to Republic of Armenia, but also to Nagorno-Karabakh, internationally recognized, de-jure region of Republic of Azerbaijan can be considered as an indicator of  “quite diplomacy” toward only one side of the conflict. Starting from 1998 the US indeed broke its “silence” with providing financial assistance to Nagorno Karabakh region disregarding critics and the problems of Azerbaijan, the major sufferer of the Nagorno Karabakh conflict. Thus between the years 1998 - 2015 American Congress officially provided Nagorno Karabakh with 44,500,000 USD assistance without permission from the Azerbaijan government[2]. Indeed with this action American government not only put its mediator status under suspicion prompting questions on impartiality, but also breached one of the salient principles of the international law on the “sovereignty of states”:

The principle concerning the duty not to intervene in matters within the domestic jurisdiction of any State, in accordance with the Charter.

No State or group of States has the right to intervene, directly or indirectly, for any reason whatever, in the internal or external affairs of any other State. Consequently, armed intervention and all other forms of interference or attempted threats against the personality of the State or against its political, economic and cultural elements, are in violation of international law[3].

The Congress tries to justify its policy of supplying the financial assistance to Nagorno Karabakh with the words that it “supports confidence-building measures among the parties to the conflict” with ignoring all hindrances it may bring to the solution of Nagorno-Karabakh conflict. Consequently, the US with its “quiet diplomacy” prefers silent mode in Nagorno Karabakh conflict vis-à-vis the Azerbaijani side and unfortunately takes on its “favorable” mask supported by the Armenian lobby in the US when the case is related to the other party of the conflict. Indeed with the financial assistance to NK the US actually provides its indirect recognition of the Nagorno Karabakh as a separate party of the conflict. This policy need to be reviewed by Azerbaijan, “a geopolitical pivot”, once labeled by the former National Security Advisor of the US, Zbignew Brzezinski.

The second aspect of this “quite diplomacy” is coming from the American silence on the Armenian side. With illuminating all the cracks in Azerbaijan’s political and civil societies, American policy-makers and media seem very oblivious to the shortages on the issues going on in various spheres in the Republic of Armenia.

Besides the personality of the presidential candidate, Armen Sarkissian selected by the Armenian parliament, the real aim hidden behind the transition from presidentialism to parliamentarianism of the political structure erupted in controversial debates. Thus, at least two issues pertaining to the elections in Armenia should be discussed, with underlying the fact about the American preference of turning “quiet diplomacy” concept on.

The facts appeared after the declaration of the candidacy of Armen Sarkissian as a presidential nominee revealed the disputes due to the vagueness of his citizenship, and the background as both diplomat and businessman. The series of articles published by AVIM raised these issue from various aspects[4].

The second point which needs to be addressed is the election and the recent resignation of Serj Sargsyan from the post of Prime Minister as a result of ongoing public protests. Not regarding the rhetoric about strengthening the speed of democratization in the country utilized by the RPA party members during the campaigns for justifying their will to bring structural transition on the political domain, the majority believes that the most salient motive was the will of Serj Sagsyan to extend his term of being in the power. Certainly, he achieved it officially in April, 17 after the designation as a new Prime Minister of Republic of Armenia, with being able to continue his executive power.  Nevertheless, his power as the government leader could last only a week until the obliged resignation triggered by the mass demonstrations.

It is only fair to question the reason hidden behind the “quiet diplomacy” of the US towards the elections held in Armenia and the enduring silence.

IS “QUIET DIPLOMACY” A FARCE?

The analysis voiced by Kauzlarich and Kramer inspired us to deliberate on the concept of “quiet diplomacy” of the US toward Azerbaijan and Armenia. With different policies and strategies conducted by the American administration and epistemological centers toward two parties of the same conflict we may interrogate the inaccuracy of implementation of “quiet diplomacy”. It seems that the concept of “quiet diplomacy” consists of two intermingled circles: on the one hand it overlooks all the grievances of the Azerbaijani side on the Nagorno Karabakh conflict, on the other hand, it exaggerates the difficulties of the Armenian side and totally ignores the failings and deficits in its political and societal domains. This kind of evaluation brings us to the conclusion that the article written by Kauzlarich and Kramer, inadvertently reveals that such “quite diplomacy” itself can be considered as a big farce.